Negative gearing is the misallocation of wealth into housing via government subsidisation. You'd have to believe there are fairies at the bottom of the garden if you thought this was "common sense", argues Martin McMahon.

‘It is no crime to be ignorant of economics, which is, after all, a specialized discipline and one that most people consider to be a ‘dismal science.’ But it is totally irresponsible to have a loud and vociferous opinion on economic subjects while remaining in this state of ignorance."

MALCOLM'S NEW mantra or three word slogan to Leigh Sales on ABC 7.30 this week is: "it's common sense".

Not according to Waleed Aly, who took Turnbull to task and explained just how negative gearing works, as per the video below

and why it doesn't — as deliciously descriibed by Kate Aubusson of the Sydney Morning Herald in her article 'The Project's Waleed Aly is in no mood to attend Malcolm Turnbull's negative gearing party'. 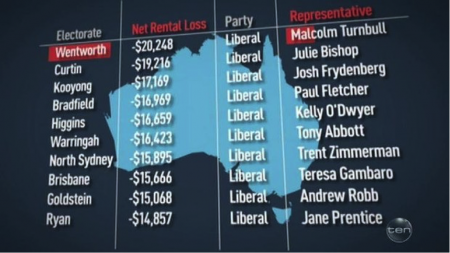 The Project highlighted the top 10 electorates that claim the highest average losses through negative gearing. Photo: Channel Ten's The Project

According to Turnbull, it’s common sense that the world as we know it will end if negative gearing is changed in any way.

When even the rightwing think tanks that they can usually rely on are against them they are getting in trouble with their blinkered blindness. John Daley, chief executive of the Grattan Institute, quickly bebunked the spin that negative gearing is used by many people on modest incomes to get ahead.

It's common sense that if people are speculating on real estate because they are being encouraged to do so by negative gearing, prices will continue to escalate. Australia has the second most overpriced real estate in the world after Singapore.

Even though Moodys recently warned that tax increases would be needed in addition to spending cuts.

However, Morrison says that the Government only has a spending problem. Well, negative gearing is both a spending and a revenue problem. The Government doesn't get the revenue because it's gone into speculation and the government can't spend it either. But someone always has to pay.

It’s common sense: One million investing in speculative realty and the other tax payers subsidising them.

It’s common sense apparently in the fairies at the bottom of the garden world of Turnbull and his Loony Tunes mates.

It’s common sense for them that they are protecting their own election prospects.

The nature of tax equity has been understood for a very long time and was elegantly put by David Hume in 1752:

Every person, if possible, ought to enjoy the fruits of his labour, in a full possession of all the necessaries, and many of the conveniencies of life. No one can doubt, but such an equality is most suitable to human nature, and diminishes much less from the happiness of the rich than it adds to that of the poor. It also augments the power of the state, and makes any extraordinary taxes or impositions be paid with more chearfulness. Where the riches are engrossed by a few, these must contribute very largely to the supplying of the public necessities. But when the riches are dispersed among multitudes, the burthen feels light on every shoulder, and the taxes make not a very sensible difference on any one's way of living.

Add to this, that, where the riches are in few hands, these must enjoy all the power, and will readily conspire to lay the whole burthen on the poor, and oppress them still farther, to the discouragement of all industry.

Speculation in any commodity is a very dangerous game to play and government induced speculation makes it even worse. This is what happened in Holland when tulips were speculative.

Prices were rising so high that people were trading their houses and land, life savings and anything else they could liquidate to get more tulip bulbs. The originally overpriced tulips enjoyed a twenty-fold increase in value — in one month!

It’s common sense of course that eventually the tulips became worthless, but only after many people had lost their entire assets.

These are a few of the major market rises and crashes that created havoc: The Tulip and Bulb Craze, The South Sea Bubble, The Florida Real Estate Craze, The Great Depression (1929), The Crash of 1987, The Asian Crisis, The Dotcom Crash, Housing Bubble and Credit Crisis (2007-2009).

Another observation is that the time between crashes has decreased.

It’s common sense that that’s not all the harm that speculation does. It drags money from everywhere. The Australian share market was 6,800 points before it collapsed to half its value in 2007. Now it's still languishing at around 5,000 points. Sometimes 5,200 but if there's a hiccup anywhere in the world, even Greece, it's back below 5,000 again.

If a person had retired in mid-2007 and taken their retirement out of a defined benefit pension scheme (such as teachers etc.) and put it in the ASX 100 and purchased a broad spread of Australian shares nine years ago they would still be in the red today. See http://www.marketindex.com.au/asx100.

It’s common sense that the money that should have gone into industry went into passive non-productive investment such as housing, aided and abetted by negative gearing.

It started with Howard/Costello who in their own stepfatherly way, gently took each toddling Australian industry by the hand, led its childish footsteps to the brink of the bottomless pit, and gave it a push, so ending its troubles forever.

The Liberals in all their guises since federation have existed only to oppose organised labour movements. Wherever two or more are gathered in the name of unionism they shoul be destroyed.

(There have been 8 political parties in office in Australia since Federation in 1901, these are: Protectionist, Labor, Free Trade, Commonwealth Liberal, Nationalist/United Australia, National Labor Party, National Country, Liberal.

Currently the Liberal Party are the dominant party in a coalition with the National Party of Australia (previously known as the National Country Party).

The Australian Labour Party has been around since 1892. It changed the spelling of its name in 1912 to the Australian Labor Party, (after being influenced by the United States Labor Movement).

After all, the name changing and subsumptions this effectively leaves two political parties that have governed Australia since Federation — the Liberal Party and the Labor Party.

The ratio of years in power is 2:1 for the Liberal and Labor Parties respectively. 76yrs to 37yrs)

Where is the money for the housing bubble that is being accelerated by negative gearing coming from? We are borrowing it overseas. See where Australia sits in the great index of indebtedness. 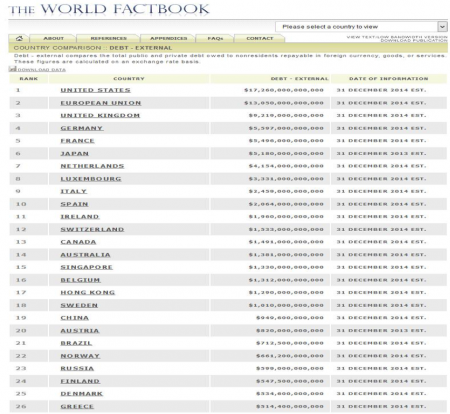 The above graph is from The World Factbook and can be found here.

If Greece was added on to Australia’s debt we would only move up one place in the ladder. And Greece would be free and clear. And our share marked wouldn’t get spooked every time Greece got a mention in the media anywhere in the world.