Liberals and Conservatives — they really are different

Research shows conservative and progressive brains are physically different, with rightwingers being much more susceptible to fear. Anthony Element comments.

I LOVE TECHNOLOGY. It gets me from here to there really, really fast, it lets me carry my library in my pocket without tearing my trousers and, yes, it’s finally proven that conservatives and liberals have physically different brains. 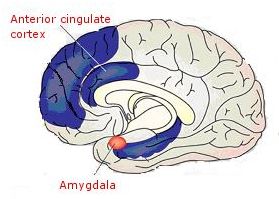 Ryota Kanai, in a paper published in Current Biology, found that

I’m guessing that each side has always suspected that those folk over there with the whacky ideas really are a different species. Turns out they were right.

A large ACC is associated with such things as:


Whereas a dominant RA is associated with:

Not one of which is or was an actual crisis — but Tony never saw an amygdala he didn’t want to terrify.

Oh, and I should add to the list, the perennially popular border protection crisis.

“We need to stop people from drowning at sea. But these folk are genuine refugees and we have international obligations to think about, so we need to tread a careful path.”

Liberals talk about complex science and how we face a huge problem that will take decades to solve.

I’ll say this for being RA dominant — it makes life easy.

For a while anyway; until the reality becomes inescapable.

So it is with our new government’s refugee policy. We have an Immigration Minister Scott Morrison, who exhibits classic RA dominant symptoms and who’s sung the scare me song for three years. Now he’s in power and the reality that he can’t stop the boats has hit him —hard.

His RA took one look at the situation and said:

And what do we get? Suddenly boat arrivals become secret. The perfect RA response.

Is this a beautiful piece of research, or what?

So the next time you want to chat someone up, here’s what you do: you just figure out if they’re a Labor or Greens supporter or a Coalition supporter, and then either make them think, or scare the life out of them.

Liberals and Conservatives — they really are different