HARDLY A DAY goes by when one parliamentarian or another doesn’t bully a private citizen into submission.

While happy to enjoy the safeguards of parliamentary privilege, launching defamation lawsuits against private citizens, members of the media or even comedians for daring to hold them to scrutiny, is now de rigueur for politicians and their privileged mates.

In a string of defamation proceedings, Coalition MPs John Barilaro, Peter Dutton, Christian Porter, Andrew Laming and News Corp journalist Peter van Onselen have let loose on members of the public to contain any potential loose tongues and shut down any future scrutiny of their alleged unsavoury activities, or those of their mates.

After wreaking havoc against the YouTuber for satirising the then-Deputy Premier’s litany of blatant and self-acknowledged pork barrelling, Barilaro finally walked away from the lawsuit. It may be that following his resignation from parliament, Barilaro’s influence is considerably weakened. Or it may be that his upcoming ICAC appearance would put paid to any claims of slander on his part. We may now never know.

In a media statement, lawyer for Shanks, Mark Davis of Xenophon Davis said:

'Our client will not be paying a cent in damages to Mr Barilaro. Not one video will be taken down.'

Shanks did apologise for any offence to Barilaro and, it is possible that the politician was offended. But surely a little satire is to be expected when one enters parliament? After all, it is becoming increasingly difficult to determine whether some politicians’ actions are fact or parody.

It's been a busy week for bruised egos.

Former chief law officer of the land Christian Porter has launched yet another defamation lawsuit. And why not? Money is obviously no object when one has secret blind trusts funding one’s legal proclivities — and belongs to a Government that can ensure there will be no inquiry into either the alleged behaviour or said secret blind trusts.

Porter, while Attorney-General, claimed he would be reviewing our defamation laws, which are too easily manipulated, making Australia the defamation capital of the world, and described them as “no longer fit for purpose".

But that was then.

With Porter later the subject of scrutiny over historical rape allegations, it was straight to the courts to demand litigation. And while on mental health leave, Porter still managed to undertake legal proceedings against the national broadcaster and journalist Louise Milligan for daring to do their job and report on the matter — despite never naming Porter in the article in question.

These charges were later dropped with the former Attorney-General bizarrely claiming victory anyway. And in a way, the action was a victory of sorts, since it succeeded in preventing the ABC from commenting further and deterred others from publishing anything for which they may face similar threats.

In the meantime, the Morrison Government also used Parliament to shut down any inquiry into the allegations in Parliament. Being in parliament does come in handy. 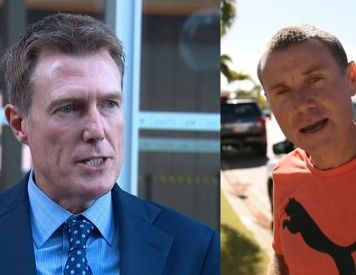 Now, aggrieved once again and armed with the moral support of fellow MP Andrew Laming (the one who made a habit of stalking women on Facebook) and mate and journalist Peter van Onselen (who takes frequent offence at everything), Porter has launched a new action. This time it is against Professor Gemma Carey, a disabled child sexual abuse survivor and expectant mother.

Carey received three separate legal proceeding notices in the one email from lawyer Rebekah Giles on behalf of Porter, van Onselen and Andrew Laming MP — all from the same lawyer Porter used during his attempt to sue Louise Milligan and the ABC.

The defamation action involves a comment tweeted by Carey about van Onselen and Porter and a separate tweet concerning Laming. Carey has now deleted the tweets and apologised online to all three men.

Despite the notices being sent to Carey simultaneously from the same law firm, van Onselen tweeted:

'I was not in any way shape or form associated with anyone else. I am the victim here, as is my wife, of defamatory comments now apologised for. We had zero to do with any coordination.'

Australian of the Year Grace Tame once again led the charge in defence of the true victims, tweeting a detailed thread, which included the following:

‘This coordinated attack clearly had a design, and I think that that was not just to silence one individual but to have a wider deterrent effect on others contemplating speaking out.

I see it as a form of systemic abuse whereby legislation is weaponised to strategically silence those with less access to power and resources.’

Then there’s Minister for Defence Peter Dutton — the man who locked up asylum seekers and all but threw away the key. He is now suing refugee activist Shane Bazzi. 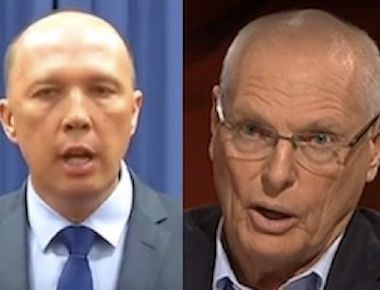 How Dutton and Molan justify the heinous

Senator Jim Molan's justifications for Australia's illegal and prolonged imprisonment of innocent refugees suggest that he is deluded.

Bazzi labelled Dutton a "rape apologist" after the Minister said he was not aware of the “she said, he said details" in the Brittany Higgins Parliament House rape case.

"…went against who I am, my beliefs. This went to a different level."

KINGS OF SHUTTING DOWN DISSENT

It appears ludicrous that the Coalition – self-proclaimed party of "free speech" – is simultaneously trying to amend religious discrimination laws to allow discrimination on the basis of ‘race, colour or national or ethnic origin’, and also suing its own citizens whenever it is criticised or held to account.

These lawsuits are not about people being unfairly treated — they are political tactics. And to that end, they have been very successful so far. They distract us, silence dissenters, dissuade possible future scrutiny and create a false narrative that focuses attention on the wrong "victims".

Grace Tame was referring to Porter, van Onselen and Laming in the following tweet but its application is far wider:

If this type of behaviour is allowed to continue, it will have the chilling effect of reversing the roles of victim and offender, erasing the truth, and ultimately perpetuating the cycle of abuse...

The actions of these three cowards is exploitative: take advantage of that power imbalance, and weaponise it for personal gain. In this system there is no Equality of Arms. The wealthy are the privileged.

Gemma is disabled, an expectant mother and also a survivor of child sexual abuse.https://t.co/7RYcd2ukmO

A GoFundMe campaign has been created for Professor Carey and others facing defamation threats from Porter, van Onselen and Laming. 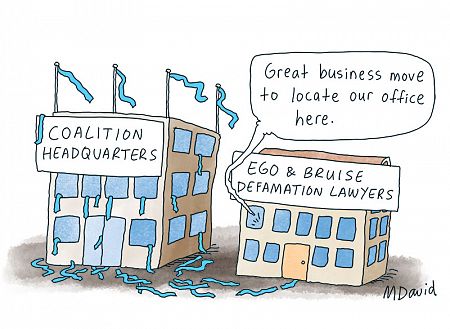