WHEN JOSH met Fran on Sunday’s Insiders on ABC TV, viewers were entitled to answers about Australia’s failing economy. While every other well-managed economy is advancing, Australia is lagging further and further behind. On top of this, Westpac Bank has just been accused by Australia’s financial intelligence agency of horrific crimes on a massive scale.

“They need to look at making some of this behaviour criminal, and even the possibility of gaol sentences ... A bank can afford to pay out five, even ten, billion. It will hurt them, hurt them a lot. But the criminal thing and the action against individuals, that really bites.”

“The Prime Minister has said the #Westpac board has to be accountable for this breach. What does accountability look like?”@frankelly08 questions Treasurer @JoshFrydenberg about this week's money laundering scandal. #Insiders #auspol Read more:https://t.co/f0sSVChk9b pic.twitter.com/sSz1ezT9za

“The Prime Minister has said the Westpac board has to be accountable for breaches. What does accountability look like?”

Frydenberg agreed these were “serious issues” and there must be accountability. But, no, there would be no gaol for the criminals or any other sanction which might actually deter, let alone punish. Not under this Government.

He declined even to support sacking the offenders:

Kelly demonstrated, not for the first time, that the ABC will not challenge the Coalition’s fiscal falsehoods.

In response to her first question, Frydenberg said:

When we came to government, unemployment was 5.7%. Today it’s 5.3%. We have a record number of Australians in jobs. We have just produced the first current account surplus since 1975 ... the budget is back in balance, already delivered, for the first time in 11 years. And we’re going to deliver a surplus. That means paying down Labor’s debt. Right now we have an interest bill of around $19 billion a year ...

So what we need to do is build the resilience of the Australian economy and face those domestic and global economic headwinds that all countries are facing, particularly the trade tensions.

More than six hypocrisies and falsehoods were embedded in that brief spiel. Kelly challenged none of them.

Yes, unemployment was 5.7% in 2013. But that was near the end of a global recession. That ranked eighth in the Organisation for Economic Cooperation and Development (OECD). Today it is 5.3% which ranks 21st, as we saw here last week. Australia’s performance on job creation is now the lowest it has ever been relative to the rest of the world.

Budget back in balance

No, it isn’t. Data from the Finance Department last Friday shows the deficit at the end of October was $14.7 billion. It projects a surplus next June. Seven months away.

Labor left modest gross debt of just $271.7 billion. The Coalition not only doubled that in a shorter time but has doubled all debt incurred by all governments since 1854. The increase since the Coalition came to office has been the second-worst in the OECD, after only Chile.

Yes, interest on the debt is high and is diverted from urgent needs. But more than half of this is due to the Coalition stacking on debt over the last six years while most well-managed economies have reduced theirs.

There are no global headwinds. The world is in a strong upswing in jobs, economic growth, wages, corporate profits and government revenue.

In the last few days, all have released figures on annual growth in gross domestic product (GDP) for the September quarter. The average is a healthy 3.19%. All recorded higher growth for September than for the June quarter. All but three have jobless rates lower than Australia’s. Only Nigeria is still struggling to reduce unemployment.
If there are no global headwinds facing these economies – and the others yet to report their September data – then there are none for Australia either. Fran Kelly really should know this.

There are no “trade tensions” impacting Australia negatively. This is another tawdry excuse to cover the reality that vast wealth is streaming out of the country, with precious little benefit accruing to Australians.
Evidence of the strongest trade boom in Australia’s history includes the monthly export values (see pink graph, below), the recent run of record trade surpluses, reported corporate profits and, as Frydenberg acknowledges, the first current account surplus in 44 years.

In response to a question about recent tax cuts, Frydenberg schmoozed that “We’ll always be the party of lower taxes.”
The evidence shows tax collections on the majority of Australians have always been higher under Coalition governments than under Labor. 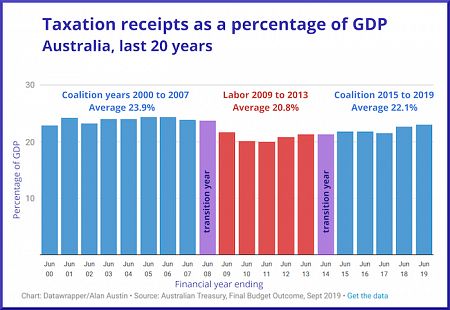 Frydenberg: “We are growing faster, according to the OECD, in 2020 than the United States, than Canada, than Japan, than European countries.”

This is a blatant, bare-faced, black-hearted lie straight to the camera. Annual growth figures are updated quarterly at tradingeconomics.com and elsewhere and readily available to all.

Australia’s latest annual growth number is a puny 1.4%, a fact which Kelly actually read from one of her prepared questions. The United States is now at 2.0% and Canada at 1.6%, both higher than Australia. Japan is 1.3%, marginally lower.

More than 30 European countries have higher growth than Australia’s. Cyprus, Macedonia, Latvia, Serbia, Romania, Montenegro are more than double at 2.8% or better. Ireland, Hungary, Ukraine, Georgia and Moldova are more than triple.

KELLY: Josh Frydenberg, thanks for joining us.

FRYDENBERG: Good to be with you.

Of course it was good. No question on shifting the tax burden from the rich to the poor. Nothing serious on wages at record low growth. Nothing on the vast loss of wealth to offshore tax havens. Nothing on Australia falling from world’s best-performed economy in 2013 to ranking 28th today.

After the interview, Kelly crossed back to her panel of three mainstream journalists — from The Guardian, The Sunday Telegraph and an ex-Fairfax academic. None of them sought to correct any of the Treasurer's misinformation either.

Good to be with you, indeed.

Fran: Here's some figures on how bad the economy is

Joshie: I'm gonna ignore your figures & give you some other figures