Not since it downed a plane carrying the Admiral of Japan’s Imperial Navy at the height of World War II had the U.S. military so brazenly struck down the most powerful military official of a foreign government, in war or peace.

Perhaps the only thing preventing total war in the Persian Gulf, the nerve-centre of the world’s energy system, was the immediate and overwhelming revulsion which the assassination ignited, even among close U.S. allies.

The self-christened “#Resistance” to the Trump Administration, encompassing a spectrum from progressive activists to Bush-era Republican war hawks, seemed to have grasped, if even for a moment, the danger which the U.S. posed to the peace and stability of the world.

It is this which makes the dissonance with the last two days all the more remarkable. 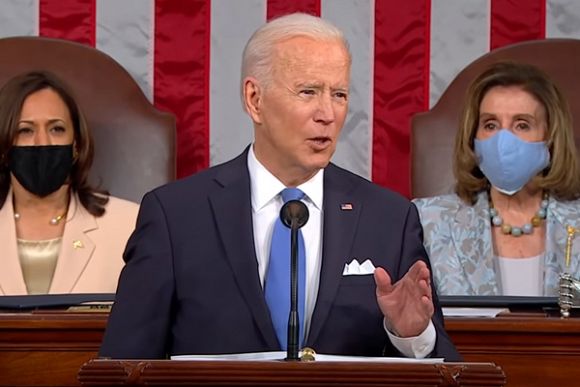 In the tradition of his predecessors, President Joe Biden earlier this week authorised airstrikes on the Iraq-Syria border against the militant groups Kata’ib Hezbollah and Kata’ib Sayyid al-Shuhada, reportedly killing at least four. The targeted facilities were claimed to be for the production of drones used to attack U.S. army personnel.

The Pentagon’s statement announcing the strikes made the truly audacious claim that action had been taken on the principle of “self-defence”, even if said defence was happening on the opposite side of the globe in another country which the U.S. had illegally invaded, occupied and refused to withdraw from, despite being asked to by none other than the Parliament of that country.

As if offering justification for U.S. actions, establishment media voices across the spectrum have flooded their copy with as many descriptions of the Shi’a militants as ‘Iran-backed’ and ‘Iran-aligned’ as possible. Not quite as understanding, however, was the Iraqi Government itself, condemning the strikes as “a blatant and unacceptable violation of Iraqi sovereignty and national security”.

Admittedly, these strikes are not on par with the Soleimani assassination, however, the lack of concern by the same tweeting classes that would be hysterical had Trump given the order suggests a distinct lack of sincerity in their past opposition to U.S. militarism.

Like General Soleimani, these “Iran-backed militants” are also the most fearsome and effective opponents of Al-Qaeda and its offshoot ISIL. In 2014, when whole divisions of the Iraqi Army inexplicably folded before the advance of a few thousand ISIL militants, it was Soleimani and groups such as Kata’ib Hezbollah that formed the pan-sectarian “Popular Mobilisation Forces” and which prevented the Iraqi State from collapsing.

Just last week, the PMF staged a commemorative parade in the province of Diyala, attended by Iraqi Prime Minister Mustafa al-Kadhimi, driving home the point that they form an integral part of the Iraqi State’s security apparatus, an apparatus which has now been attacked by the U.S. military.

Kata’ib Hezbollah responded to the strikes almost immediately, declaring itself to be at war with the U.S. military and vowing to retaliate using its substantial store of rockets. Depending on the nature and scope of that response, U.S. personnel may well soon find themselves shooting at the strongest institution holding up the semblance of an Iraqi State.

Faced with the disintegration of the Iraqi security forces, President Biden will be faced with one of two options — finally withdrawing from the Iraqi quagmire (highly unlikely), or committing the U.S., in the midst of a multi-generational health and economic crisis, to the direct (re)occupation of a country impatient to be rid of it.

Assuming he opts for the latter, expect the ranks of the #Resistance to be significantly thinned.