The Taliban have launched a new wave of violence against the Hazara people in Afghanistan. Namatullah Kadrie reports.

THE TALIBAN HAVE killed hundreds of civilian fighters and have displaced thousands of others as they stormed in on Hazara-dominated districts in the past three weeks.

On Monday morning, the Taliban announced a “total defeat” of the Malistan district of Ghazni province, one of three Hazara-dominated areas that have fallen to the Taliban’s hands.

The Taliban – who are said to number at least 1,000 – began their multidirectional assault against the Hazaras, beginning with attacks on Khas district of Uruzgan province around three weeks ago, before apportioning resources to Jaghori district of Ghazni province.

“Thousands of members of #Afghanistan’s mainly Shi’ite #Hazara ethnic minority have fled their homes in the central province of Ghazni as the Taliban have pressed into two previously safe districts” #JaghoriUnderAttack #MalistanUnderAttack https://t.co/uwsw4uxC7s

Elyas* arrived in Kabul on Monday, fleeing Malistan after hearing the Taliban were marching on toward their district.

“Almost every resident from Muqlai, Abdinah, and Godal had fled their residence, and made their way to Kabul.”

When asked about the number of people who had fled Malistan, he said, giving the Mir Ahmad clan of Malistan as an example, “the Mir Ahmad clan constitute of at least 85 khanwar (households). Almost everybody from this clan has left for Kabul".

“Unfortunately, the people didn’t put a fight, and the government forces, who didn’t number a great amount, were killed.”

A civilian resistance fighter, Arif Rezaie, later said that at least two civilians from Malistan were wounded and were taken to Nawur.

A Taliban spokesperson said in a statement that 11 commandos were killed along with 31 other fighters who most likely consisted of civilian fighters.

Most of the villagers with their families fled Malistan toward Kabul using private transport. “Whereas before a Tonis (a minibus carrying about 10-12 people) used to cost 8,000 Afghani ($145 AUD) at maximum, people now pay 17,000 ($310),” Elyas said.

Malistan has almost been deserted, now:

“Everybody from Malistan ran for their lives.”

* Elyas feared for his safety and security and requested that his full name not be used. 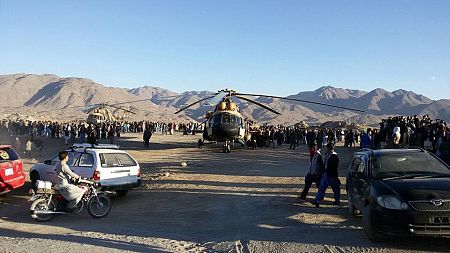 As the Taliban announced on Monday that it had attacked Malistan, hundreds of protestors in Kabul took to the streets to clamour for more security support in Hazara-dominated areas of central Afghanistan.

However, the protest which began on Sunday night and carried into midday Monday, was soon terminated when an ISIS attack on the protest claimed the lives of six people, wounding 20 others. At least two protestors were among those killed.

The four students and civil activists who lost lives in this week suicide attack on a civil protest in Kabul. #Kabul #JaghoriUnderAttack #MalistanUnderAtrack https://t.co/gnUWxjbEDm

Arif Rezai, a civilian fighter who fought against the Taliban in Hotqol on Friday but fled to Bamiyan by Monday, said he saw “18 commandos and 20 civilian fighters” killed in the conflict.

The same day, the Taliban boasted about having killed 22 commandos, and having cashed in “on sizable amounts of arms and equipment".

Taliban spokesman, Zabiullah Mujahid, also said that no militant had been killed up until Monday.

However, Mr Rezai disputed this.

When I initially interviewed Mr Rezai last Friday, he said the Taliban took hostage “12 civilians” when they attacked Hotqol. Of those, “six elderly men were released whilst the younger men were kept as hostages".

“When we questioned those elderly men, one of the things they said was that the Taliban had lost a great number of men.”

“At least 100 civilians have also been killed, of whom four are Pashi, and two are from Anguri.”

Among those killed was a notable Hazara General, Bashi Habibullah Jaghori, locally known as “Bashi Habib” who provided security to the Ghazni province.

“Bashi Habib and three of his sons, Hayatullah, Bashir and Jawid were all killed,” Rezai said.

Soon before Rezai fled, he said that at least 600 Taliban members had congregated at a checkpoint near Mado Qala.

In a subsequent interview, Rezai said that 100 reinforcement commandos had landed in Sang-e Masha on Tuesday.

A resident of Baba, Nematullah Rafi said that six helicopters had arrived, of which four loaded the commandos and the remaining two carried their supplies and resources.

Mr Rezai said he could not provide an exact figure of the total number of villagers who were displaced due to the attack. He said, however, that almost everywhere where fighting was going on in the Jaghori districts, most of the people had fled.

The Taliban's insurgency is having significant effects on life in Afghanistan, according to Mr Rezai:

“Each household consists of at least 4-5 people. There are thousands of houses in Dawood, Angori, and Hotqol. You can imagine how many people have been devastated by the Taliban’s attack.”

Thousands have fled to escape fighting in two ethnic Hazara-majority districts in Afghanistan. Taliban militants have been battling Afghan special forces and ethnic Hazara militia in the previously safe districts of Jaghori and Malistan in Ghazni Province in the past week. pic.twitter.com/d2WfNeII5o

Motive for the Attack

The Taliban were quick to dismiss that there was any particular intention behind their assault on Hazara-dominated districts.

“This attack is not against any specific race, ethnicity, or sect but is against targets associated with the Kabul administration just like the rest of the country. All our local countrymen especially the Hazara and Ahl-e-Tashayyu (Shi’ites) must remain vigilant of the plots of those stooges and malicious circles who are sitting in Kabul and are trying to interpret these attacks in a sinister light.”

Mr Rezai rejected this statement, saying, “the Taliban have a plan of massacring and displacing the Hazaras.”

Mr Rezai said that, unlike in Uruzgan where villagers were asked to pay ushr (tithe), Dawood, Angori and Hutqol residents in Hazara districts were not ordered to do so. “Truth be told, we were not told to pay ushr.”

They were however told to “support the Taliban,” to “denounce their allegiance to the Kabul Government” and “establish their footing in that region", Mr Rezai said.

Fears of a Massacre

The recrudescence of attacks on the Hazara-dominated region has reawakened fears of massacres amongst the minority group.

Many fear of attacks similar to the 1998 massacre which saw the extrajudicial killing of 2,000-5,000 Hazaras in Mazar-e Sharif.

Although some have argued that the Taliban has shifted their political and religious motives since then, many Hazaras remain sceptical, especially given the joint attacks between Taliban and ISIS which targeted Hazaras.

Namatullah Kadrie is a freelancer who mainly writes on issues related to immigration, refugees, and asylum seekers.

5 October 2018, 12:00pm A story of hope has emerged from a senseless tragedy caused by Islamic State ...
Join the conversation
comments powered by Disqus
News updates