Howard, Cheney and the politics of Hicks

Barry Everingham on the Australian prime minister that asked an ally to torture and demean a fellow citizen — just to win an election. 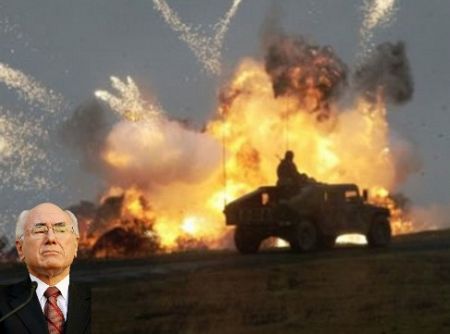 The Fairfax Press have finally reported to mainstream Australia what Independent Australia readers have known since July 26 — that John Howard called in a favour from his egregious mate Dick Cheney to “lay any charge possible against David Hicks”. (I also point you to my colleague David Donovan’s excellent interview yesterday with Jason Leopold, the US journalist who blew Howard’s cover on this story.)

Just to be perfectly clear, this was an Australian prime minister asking an ally to in effect torture and demean a fellow citizen — just to win an election!

Now, of course, Cheney wasn’t just an ordinary ally; he, along with George  W Bush and Donald Rumsfeld, concocted the lie that Saddam Hussein was in part responsible for the 9/11 atrocity in New York, along with Osama bin Laden.

Now, anyone with a modicum of history would realise that the likes of Hussein would have absolutely nothing to do with an out of control Muslin cleric — he was terrified that Islam in its most absolute form would take over his country.

But, hey, the trio were hand-in-glove with the giant Halliburton organisation and Iraqi oil was in their sights — so to hell with the safety of ordinary, peace-loving, Iraqi citizens

Said those Three Musketeers: Sadaam has weapons of mass destruction hidden in the Iraqi desert, we need to destroy them before he uses them to destroy the world.

They knew there were no WMD’s, but that didn’t stop them.

So the phones rang hot between Washington, London and Canberra, and Howard and Tony Blair bought the lie — hook line and sinker.

What Bush and Howard, of course, had in common was being in the USA when the Twin Towers were attacked — and both were, to put it mildly, scared shitless.

Neither had any active military experience and both were at a loss to know what to do.

Now, while this scenario was being played out, a feckless young Australian adventurer was experimenting with Islam and, as may happen to any young bloke of any nationality, he found himself in the wrong place at wrong time — this would cost David Hicks dearly.

He was captured in Pakistan and sold to US forces in that country.

Billed as a dangerous terrorist who surely would have vital information, he was hooded, gagged, dressed in a jump suit, hands and feet shackled, brutally beaten and then thrown onto a giant US transporter to be taken to that playpen for US Marines—Guantanamo Bay.

And this is where we came in.

For years, Howard wouldn’t lift a finger to help his fellow citizen; he just couldn’t have cared less.

Until his stocks were so low, that is, that he knew his days as prime minister were numbered.

He had been humiliated in front of the whole world when his multi-million dollar “ring of security” around Sydney was exposed by the ABC’s The Chaser — whose prank to get through the expensive cordon was so perfect local police and US Security agents actually helped them though.

So, he picked up a telephone and invited Cheney to Australia, whose arrival threw Sydney into another ridiculous lockdown, and in the luxury of Kirribilli House, Howard begged his mate to get Hicks before a “court” on any charge he could concoct.

Hicks by now was sick and tired of and  was beaten down by the cruelty he had endured and realised whatever he was asked to sign he would — he wanted out.

He was “tried” before an illegal Kangaroo court and of course found “guilty”.

He was returned to Australia, sent to jail in Adelaide and on release wrote a book.

To its undying shame the Labor Government, as it was in Opposition, was unconcerned by the plight and future of Hicks, but this week we’ll know whether or not he can keep the royalties his book attracted.

Meanwhile, the five men who are responsible for the destruction of Baghdad and the deaths of hundreds and thousands of innocent Iraqi citizens and free and at large.

Bush, Howard, Blair, Cheney and Rumsfeld should be tried as war criminals.

We live in a strange world.

I wrote to Queen Elizabeth II outlining the treatment Hicks was getting on Guantanamo.

Her Majesty, though her political secretary, replied that she had sent my letter to the British Secretary of State for Foreign and Commonwealth relations.

Not to Downer, not to Howard  — which, in itself, was telling.

I was contacted by the Head of Security of the department to whom the Queen had sent my letter, who was frank in the extreme.

Paraphrasing, he said Hicks would have been helped by HM’s Government had his application for British citizenship not been then before the UK Courts.

He said Blair had secured the release of all British citizens held on Guantanamo and no further charges were laid on their return to the UK.

There was no such respite for Australian citizens under John Howard.