How many loyal, hard-working members do the Labor Party need to lose in NSW before the National Executive step in and stem the blood flow, asks Peter Wicks from Wixxyleaks.

On 4 May, I wrote an article regarding charges that had been laid against some long-term Labor Party members by NSW Labor. These charges were made by a supporter of Wollongong MP Noreen Hay, an MP who is certainly no stranger to controversy.

The charges were related to these members' support of Independent candidate Arthur Rorris during the last state election rather than their support for the endorsed candidate Noreen Hay.

These members decided Arthur Rorris was a far better representative of Labor values than Noreen Hay and, with even a quick glance at their histories, it is easy to see why.

With Rorris, you have someone who has represented the Labor movement as secretary of the South Coast Labour Council for 15 years and ran on an anti-corruption platform. Hay, on the other hand, is a former Joe Tripodi ally and was even suspended from her Government portfolio during the ICAC hearings into Tripodi, Obeid and their mates, only to be reinstated later despite a huge outcry. Add to this, Rorris was only running after he had his Labor membership lapse in extremely questionable circumstances, despite numerous attempts to resolve the matter through Labor's NSW office, as per his email to state secretary Jamie Clements, shown below: 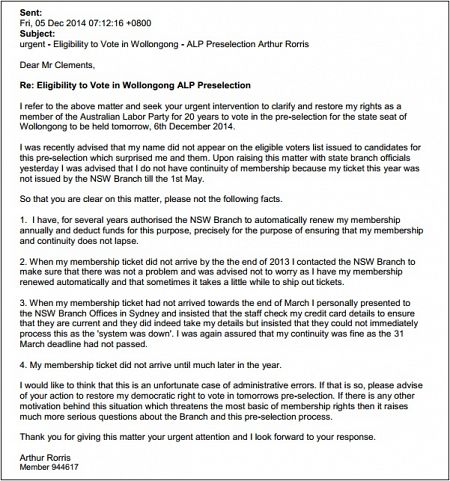 Jamie Clements has backed in Noreen as the Opposition Whip and replaced members of his office staff when they allegedly refused to work with her. Clements has also publicly referred to the strongest ally workers have on the NSW south coast as 'Rorris the Rat', prompting some people to refer to Jamie as 'Clements the ...'

Well, you get idea.

@madwixxy I don't have the power to expel people without Icac findings. Up to the IAT. No one as yet expelled for supporting Rorris the rat

One of those facing expulsion is Kim Sattler, who has sent Clements a letter explaining why she will be unable to attend an appeal hearing into her charges and to state her view on the circumstances surrounding the charges being brought against her. Kim has kindly allowed publication of her letter so that other members be made aware of the way concerns of long-standing and active members were being treated by the current Sussex Street machine.

Kim is certainly no party lightweight. She has been a member of the ALP since 1983 and was even a pre-selected candidate for the seat of Molonglo in the ACT. A tireless campaigner in every campaign imaginable. Kim was also the elected secretary of Unions ACT from 2006 until 2014 and is also chair of the National Museum of Labour.

As Kim states in her letter:

'A person like myself does not decide to support an independent candidate against a sitting member unless something is seriously wrong, and without a lot of considered thought.'

Kim does not dispute most of the charges brought against her, however she claims this was due to the party not following its own rules and by local branches also failing to follow the rules. 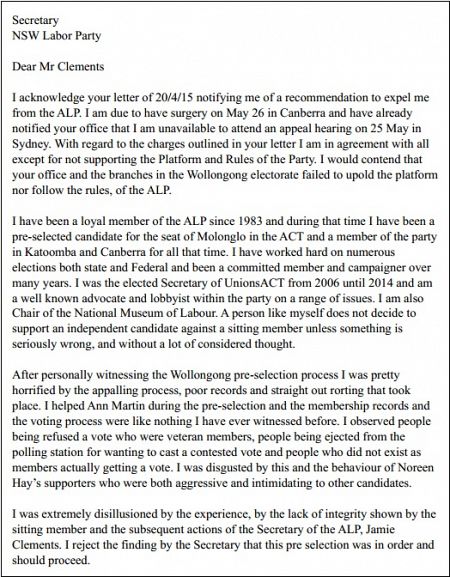 While this may sound fanciful to some, it is worth bearing in mind that after a Fairfax investigation, Clements himself was forced to shut down one of these branches – Mt Keira – after it was found to have falsified branch records.

In her letter, Kim also talks about the pre selection itself; it is clear that she was both shocked and appalled by the process that Jamie Clements deemed was in order.

The issues highlighted by Kim in her letter are definitely a poor reflection on the Party, and certainly indicate a lack of leadership from the NSW Branch. I most certainly agree with Kim's criticism of the running of this year's election campaign, as do many members with whom I have spoken.

The Sussex Street campaign authorised by Jamie Clements did not show the party as a well-oiled machine; it showed a party more akin to rusty wreck disintegrating in a paddock. The State campaign was run by a man many believe is hopeful of a seat in the Senate one day, however based on his performance in the NSW election, I wouldn’t have Clements run the campaign for a local council candidate. If the party ever reaches a point where it is wasting a Senate seat on someone of this calibre it will be a sad day indeed.

How many loyal, hard-working members do the Labor Party need to lose in NSW before the National Executive step in and stem the blood flow?

Presentation by ACTU to Kim Sattler for her contribution to workers & OHS #ausunions @unionandlabor #unionsact pic.twitter.com/oEQ9yaSRbi

These members will not just disappear into the political wilderness either, as Kim says in her letter to Clements:

'You can be assured that I will continue to play an active role in local politics but it won’t be in the name of the ALP any longer, but in the name of what the ALP should stand for in future.'

It would seem current Sussex St management have lost all sight of what it is the ALP should be standing for.

Let’s hope a change of direction is on the cards. Soon.

Peter Wicks is an ALP member and a former NSW State Labor candidate. You can follow him on Twitter @madwixxy.

The rot Noreen away at the heart of the NSW ALP, by Peter Wicks. @madwixxy http://t.co/RBiERWcCfM

Loyalty to the truth. Subscribe to IA for just $5.