The rot Noreen away at the heart of the NSW ALP

As many of you will be painfully aware, reform has been on the lips of Labor Party members in NSW for what seems like an eternity to many.

One of the electorates people often point to when they speak of the need for Party reform is the Wollongong electorate.

The Wollongong electorate is one I have written about many times and it is one I can unfortunately say that none of the things I have highlighted have been in any way good news. The electorate is represented by Noreen Hay, who is one of Joe Tripodi’s old allies and friends and has been the centre of controversy many a time. Noreen has been someone of whom many have expressed an opinion that claims she is an indication that the days of Tripodi and Obeid are not that far behind the party.

Prior to the recent NSW State election, there were allegations of branch stacking and improper pre-selection processes in the Wollongong electorate. One of the branches was eventually closed due to the falsification of branch records. That branch was the Mt Keira branch and a Fairfax investigation into some of the apparent members that were alleged to have been supporters of Noreen turned up empty houses and shadows supporting claims that the branch with fictitious records may have also had a fictitious member list.

It even reached the point where Sussex Street were seen as running protection for Noreen Hay and being accused of using dirty tricks to do so.

So, when I heard that the NSW Labor Party were expelling members in the area, I thought at long last the message may be sinking in. Hopefully, efforts were being made to clean up the electorate after what would appear to be years of neglect, that have resulted in a stench that has threatened to permeate into the fabric of the entire party.

Alas, I was only setting myself up for disappointment.

Instead of addressing the issues that have ended up forcing the closure of a branch, Sussex Street have instead focused their efforts on expelling some long term members of the party who decided that they did not have the stomach or flexible morality to support the campaign of Noreen Hay.

I have been made aware of five of these members, one of whom has been a loyal party member for close to 30 years. Others include officials from at least two unions. Some assumed they had been expelled and were being given a chance to explain their actions before the party appeals tribunal.

Now, what was the crime that warranted expulsion proceedings, you may be wondering.

These people openly supported an independent candidate rather than Noreen, who was the endorsed candidate. While this is a valid charge under party rules, there are some extenuating circumstances that should be taken into account and I hope that those facing expulsion take this matter through the appeals process.

One of those points is that some of these people wanted to back the Labor candidate. However their ability to take place in the pre-selection process to decide on a candidate was taken from them at the 11th hour when told they could not have a vote in the party pre-selection for a variety of reasons, all of which they dispute. They were not given a chance to dispute these reasons until after Noreen Hay was announced as the candidate.

The Independent candidate they supported was a man by the name of Arthur Rorris, who has been Secretary of the South Coast Labour Council for 15 years and is highly regarded as someone who has stood up for the working class in the area for decades.

NSW secretary Jamie Clements has contacted me since publication of the above on Wixxyleaks, via Twitter:

@madwixxy I don't have the power to expel people without Icac findings. Up to the IAT. No one as yet expelled for supporting Rorris the rat

Those who received letters explained that they were extremely unclear as to explaining their current membership status.

"Rorris the Rat", as Jamie Clements called him, was at the South Coast May Day events he organised, along with the thousands of workers and union members he represents.

Rorris was campaigning during the election campaign on an anti-corruption platform, something that clearly bothered Noreen as she went to the press saying she hoped he would run a “clean” campaign — something Noreen clearly didn’t know how to do branding him the second Liberal candidate. At one stage in his time as a Labor Party branch secretary, Rorris spoke out against branch stacking Eric Roozendaal, someone who was in a virtual revolving door with ICAC and someone Noreen Hay’s daughter was employed by at one stage. For his efforts, this earned him a six month suspension from the Party.

Roozendaal is still a Labor Party member despite a push last year for his immediate expulsion. Fairfax reported at the time that it was understood that NSW Labor’s General Secretary Jamie Clements decided there was not enough evidence to expel him.

Good for Eric, however it would seem that, while resisting calls to expel Roozendaal, under Jamie Clements’ watch, they are quick to seek expulsion for those who don’t support Noreen Hay.

I spoke to Arthur Rorris, who only left the Labor Party after he had his voting rights as a member stripped from him by Sussex Street in a manner that was extremely questionable. Arthur was one of those who was told he could not take part in the democratic process of a pre-selection when he showed up to vote and was escorted from the premises.

Below is a link to the email Rorris sent to Jamie Clements regarding his membership status: 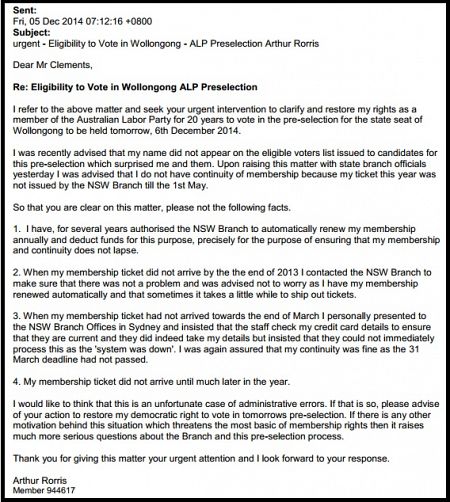 Rorris has not received a response.

Given he could no longer have a voice in the Labor Party Arthur felt that he had no choice but to run as an independent candidate in order to ensure  the actual labour movement in the electorate had a valued voice in government.

He described the Labor Party in NSW as something that was once a movement and now bore a closer resemblance to a club, adding:

'Corruption is a cancer that eats away at the foundation of our movement and ties our hands in our fight against big business, privatisation, and working people.'

That is the man Noreen branded the second Liberal candidate?

It appeared to me that Arthur Rorris is exactly the type of person the Labor Party should be embracing, not pushing away.

What is really interesting is that when it comes to the Mt Keira branch that was been shut down due to falsified branch records, things have not moved so rapidly. This is the branch that Fairfax found had some, at best, highly questionable members and is a branch not so affectionately known as the “Nostradamus Branch” by locals — in reference to branch minutes discussing events that hadn't actually happened yet.

This branch that did so much damage to Labor’s reputation in both the electorate and the state has seen no members expelled for the falsification of its branch records, even the members that nobody can find are all still officially party members from what I can ascertain. There has been no investigation that I am aware of into any member in relation to these breaches of party rules.

The members from this branch were free to join other branches, vote in pre-selections and put motions forward as normal, only their physical location was changing, their loyalties and motivations remained.

Still, the closure of the branch gave Jamie Clements an opportunity to pat himself on the back and create the illusion of cleaning up the Party by having special powers granted to him by the Administrative Committee.

As Clements should be aware, a branch is a product of its members, not the other way around. Spreading the members of a branch that doctored its own records around only spreads the problem it does nothing to solve it.

If Clements is aware of this then he is derelict in his duties, and if he is unaware of this he is not fit for his position.

I approached Jamie Clements with some queries on these matters earlier this week and, apart from the Twitter exchange mentioned above, at time of publication, have had no response.

The Labor Party has a strong history of supporting its membership and for being a party of ethics and strong values.

As a Party, Labor needs to set itself a reform agenda. With the Liberal Party going through its own ICAC crisis and struggling to find a way of dealing with its issues, now is the time for Labor to step up to the plate in NSW. The Party needs to show that it can put the problems of the past behind it and put in places party procedures that are transparent and are designed to rid the party of corruption.

Anything less is a betrayal of the membership.

Most disagreed, but as I predicted months ago, Noreen Hay expected to become Opposition Whip http://t.co/2Lwi38evKj Sad day for @NSWLabor

Another reason why in the party reform debate, proxy voting by unions needs to be addressed http://t.co/v68g7Ec5fs #ALP #auspol

Get the real story. Subscribe to IA from just $5.