Giving Gonski and the NDIS a progressive critique

If Gonski and the NDIS were proposed by the Coalition then they would come under far greater scrutiny from progressives than they so far have been, says Simon Copland. 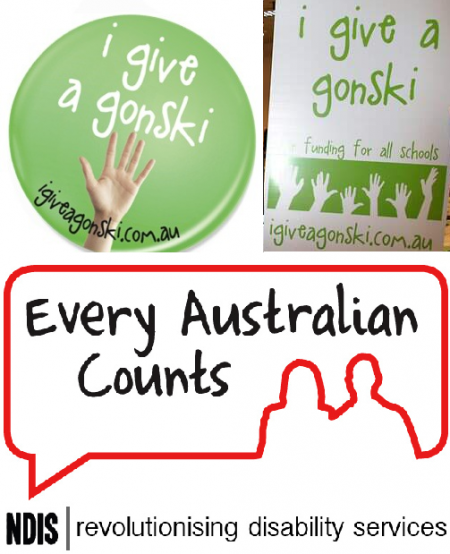 AS WE HEAD to the election in September, the ALP and their supporters seem to be putting all their eggs into two baskets — Gonski and the NDIS. These are the major social reforms of our time, we are told; reforms that will be trashed if the Coalition comes to power and, more than anything else, are the reasons we need to keep Labor in power.

Amongst all this chatter, however, comes an uncomfortable and largely unrecognised truth for many in progressive Australia. The Gonski and NDIS reforms, whilst providing some benefits, are not the progressive solutions many have been searching for. This leaves open the question: where is the left-wing critique of these policies?

Let’s have a look at each issue separately.

The details of the Gonski education reforms were announced by the Government a couple of weeks ago. In a two for one deal, in which the Federal Government would provide $2 for every $1 of extra money provided by the states, the reforms would guarantee $9,271 in Government funding per primary school student and $12,193 per high school student. Importantly, this funding is provided whether students are in Government or non-Government schools (although there are also a number of ‘loadings’ provided to schools in disadvantaged areas).

Whilst we have heard significant criticism by writers such as Ben Eltham and Geoffrey Robinson on how Labor has failed to sell these reforms, and we’ve had significant opposition from unions and universities on the tertiary cuts that have accompanied the new funding, we have heard very little criticism of the fundamental inequity of the proposed reforms:

A left wing argument against the reforms is clear. Whilst money is applied at a system level ‒ meaning the money is given to schools and not students — the system has the real potential to act somewhat like a voucher system, increasing disparity between public and private schools. It means that money will follow students, ensuring that if the flow of students to the private system continues so will Government money.

As David Zyngier points out, this has the potential to significantly increase disparity in spending:


While Commonwealth funding for non-government schools rose from around $3.50 for each dollar spent on public schools, to around $5 dollars between 1997 and 2007, in the past decade government funding has increased by 112% to independent schools.

Despite being touted as “school funding reform”, the government’s announcement this week in fact merely maintained the status quo. What was needed was a bolder political ambition for a fairer system, that doesn’t take from the poor to give to the rich.

These are the sorts of education policies that left-wing organisations have fought against for decades. For example, prior to the release of the Gonski review, AEU (Australian Education Union) Federal President Angelo Gavrielatos published an opinion piece in The Australian entitled “End schools inequality.”

In the piece, Gavrielatos argued against 'educational segregation':


Educational segregation has widened achievement gaps. Students from low-SES areas record reading scores on average two years behind their peers in wealthy areas. Its effects can also be seen in Australia's declining performance in international tests.

Despite this, many large progressive organisations have fallen sharply behind Gonski. Of course, the ALP, who often railed against the inequality in the Howard Government’s education system are the proposers of this plan. But they have seen emphatic support from the main education union the AEU, who have run a vigorous ‘I Give a Gonski’ campaign. Instead of criticising the inequity of the funding, the campaign is now spending money targeting conservative premiers to sign up to the reforms.

The same issues can be found in the NDIS debate.

The NDIS is a rather complex beast, but the basics go as follows. The scheme is designed to overhaul the funding of disability services, which is currently done through the states, not-for-profits and charity groups.

Eleanor Gibbs explains how this is done:


The scheme that is now proposed is a different model, whereby individual "participants" will come up with a plan for the supports they need and want; get that plan approved, then get funding for the plan.

Whilst it is clear that funding towards disability services requires a massive overhaul, this means that the NDIS effectively amounts to a voucher system. The problem, as Gibbs explains, is that voucher systems are not an effective way to deal with social policy.

Gibbs quotes from an Australia Institute report, which states:


On the basis of the available evidence, universal voucher schemes do not appear to be a cost-effective policy option because they are likely to be expensive, pose a significant risk to social cohesion and equality of opportunity, and are unlikely to significantly improve average academic outcomes.

This critique of voucher systems is well established in progressive circles. But for the NDIS the debate is bigger than this, as the system also contradicts what has become known as the ‘social model’ of disability, that has become paramount within the sector.


A social model of disability looks at structural and societal barriers to people with a disability being able to fully participate in the world. This model promotes accessibility of public spaces, not the NDIS emphasis on private accessibility in the home.

Yet again, despite these very real concerns, most progressive organisations have fallen sharply behind the system. A sophisticated campaign has been run around the issue, with many social justice organisations actively promoting the model. As Matthew Bowden, executive director of PWD (People With Disability) said when the NDIS bill was introduced:


A strong, sustainable NDIS is the only way all Australians with disability and their families will breathe easier and feel more confident about their futures.

And the executive director of Anglicare, Kasy Chambers, said:


By endorsing the NDIS, Government is in effect supporting a move to genuine client-centred approaches where individuals have meaningful direction of their own care. That is a key step towards building a system that is about people rather than processes.

This is despite organisations like these being strong proponents of a ‘social model’ of disability, and ongoing opposition many in the left and social justice sectors have towards voucher systems. As Gibbs notes, opposition to vouchers seems to have fallen down when it comes to the NDIS.

It is clear that both our school and disability funding systems need to be overhauled, and the Labor Government is working hard to do that in some way. Despite this, though, both the Gonski and NDIS schemes deserve a meaningful critique from the left side of politics that they are not receiving.

If presented by a Coalition Government, it would almost be certain that both of these policies would come under significant scrutiny from unions, social welfare organisation and left-wing individuals alike. Yet, because they’ve come from the ALP, we seem destined to stay quiet and accept them as the best we can get.

Giving Gonski and the NDIS a progressive critique

29 April 2013, 12:35pm If Gonski and the NDIS were proposed by the Coalition then they would come under ...
Join the conversation
comments powered by Disqus
News updates