Give me Libertarianism or give me Life

Society is no longer be divided between left and right, says David Horton, but is now split between progressives and regressives — or perhaps socials and anti-socials. 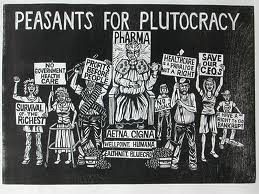 THE ELECTION RESULT has been endlessly dissected in both political terms and in terms of policy implications for issues like climate change and the NBN. But it also needs to be discussed in a much broader setting of recent political trends all over the world.

We've known for a long time that the traditional Left-Right political division, dating from the French Revolution, has reached its use-by date — as has the Socialist-Conservative division. The debate has always been about what, if anything, has replaced it. Seems to me the division is still between two radically different views of how to organise society, but just expressed in a different way.

My view is, first, that the fundamental structures and processes essential to a country should be in public ownership. That is large scale transport, energy, water, health, education, aged care, child care, communications, defence, justice, should be under public control and act for the benefit of the many, not the profits of the few.

Second, I believe that society has a duty of care to its citizens. That they have a right to breathe clean air, drink clean water, know that food is safe to eat, that buildings (homes, workplaces, shops) will not collapse on them, that traffic movements will be as safe as possible, aeroplanes won't fall out of sky, children's toys won't choke them, medicines won't kill them. A right to know that the doctor, dentist, nurse, that treats them, the teacher that educates them, the plumber, the electrician, are all qualified and skilled in the work they do. They want to know that justice is administered fairly, votes are counted impartially, that the media reports accurately.

Finally, I think that governments have obligations in terms of balance in society. That they should establish legal, financial, educational frameworks to ensure equality of opportunity, freedom of belief and speech, reduce the gap between rich and poor, equality before the law, the protection of minorities, and of weak and helpless groups, from persecution.

What these three approaches do is provide a stable society in which not only individuals can flourish and have healthy and fulfilling lines, but businesses can get on securely making profits, employing people, supplying goods and services.

The alternative view, much espoused by right wing think tanks ‒ and set up by big corporations for just this reason ‒ involves shrinking government to nothing, eliminating regulation, privatising every single activity (not even defence escaping), and encouraging great divisions and disparities. These are people who believe, like Thatcher, that there is no such thing as society; like Reagan that government is the problem not the solution. They want to return societies not just to the dark days of Victorian times, but all the way back to a kind of feudal society — although based not on the land, but in cities this time.

Whenever you see a fertiliser factory explode, an oil drilling rig catch fire, a block of flats collapse, you are looking into their world. When you see people drinking polluted water, or starving, or living on garbage dumps, or losing their children to disease unable to afford medicines, you are in their world. Where you see forests turned to deserts, fisheries running out of fish, nuclear power plants polluting the land, and the planet over-heating, you are seeing their world coming to an end.

So those are the two choices now.

All round the world, as the disease of "Libertarianism"* has been deliberately spread like a plague to suit the interests of a few billionaires growing ever richer at the expense of the rest of society, these are the choices available to those with a vote. A vote influenced by media owners also desirous of turning their fortunes of $1billion into $2billion and then $4billion and helping their friends do the same.

The only question is what to call these two political manifestations, and here I seek your thoughts: Socials and Antisocials, the Progressives and Regressives, Democrats and Plutocrats? I mean here in Australia, they are called Labor and Liberal, but the latter was always a joke.

Joke or not, they are going to be turning Australia into an Ayn Rand dystopia (with the help of at least one overtly Libertarian Senator from the misleadingly, in both senses, named Liberal Democrats).

* It should be noted that libertarianism has many strains, as discussed here. In this piece, the author is referring to it its modern, ubiquitous, neo-conservative manifestation.