'Game of mates' being played in COVID-19 Commission

Scott Morrison has been running his COVID-19 Commission as a 'game of mates', particularly in the appointment of Nev Power, writes David Ritter.

PRIME MINISTER Scott Morrison’s National COVID-19 Coordination Commission (NCCC) is rapidly becoming notorious for avoiding fair scrutiny. The covert commission has thwarted Freedom of Information requests from journalists and been able to block the Senate from viewing the conflicts of interest declared by the commissioners.

The NCCC lacks any semblance of the kind of good governance practices one would expect from a Commonwealth instrumentality — particularly with such a crucial role. There was no independent appointment process, there are no oversight mechanisms, there’s no legislative basis for the NCCC, all contributing to a basic failure to apply fundamental principles of public probity, such as ensuring that commissioners will not profit from their decisions.

The furtive conduct of the NCCC, combined with its heavy emphasis on personal networks for getting things done, has set the stage for a pandemic-inspired “game of mates”.

The phrase “game of mates” was coined by academics Cameron Murray and Paul Frijters in their book of the same name, to describe the way the Australian nation is milked by exchange networks of well-connected individuals who make billions from various major sectors of the economy. 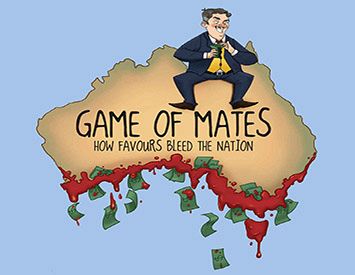 Favours, grey gifts and mutual back-scratching can be profitable when you're part of a loyal circle; Dr John Jiggens explores the acclaimed book, Game of Mates.

In Australia, there are perfectly legal ways for mates who know mates to work together, to get the best for themselves out of the system — including by changing the rules and regulations to their benefit where necessary.

The key to the game of mates is what Murray and Frijters call “grey gifts” — namely a valuable economic asset (like a rezoning, a planning permission, an exemption from regulations or any number of entirely legal “favours”) that can be given to a private entity.

Of course, nothing seems untoward about this among the mates themselves, it is just how it is — “the way you get things done around here, mate, everyone knows that”.

So what happens if we apply the game of mates lens to Scott Morrison’s NCCC?

Well, as we know from the Prime Minister, it all began with a phone call. Scott Morrison says that he rang Nev Power and said, “Nev, I need you to serve your country”.  We don’t have a record or transcript, so this is how I imagine the call.

“Nev, mate, I love your work and I’ve got a sweet gig for you,” I imagine Scott saying.

Then I imagine Scott telling Nev that he’ll get a fancy title and almost $270,000 to cover Nev’s travel, accommodation and other expenses, for six months’ work — with no deliverables and bugger all scrutiny.

“You beauty!” I imagine Nev responding. “Where do I sign?”

After that, both Scott and Nev know that they will need some more mates involved, so after Nev has said “yes”, Scott hand-picks half a dozen others, offering them a miserly two grand a day for their trouble. There’s the MD of EnergyAustralia Catherine Tanna, former CEO of Incitec Pivot James Fazzino and gas and chemicals executive Andrew Liveris.

“Beauty!” I imagine each of them saying, “bring it on!” Really, though, given executive salaries, the $2,000 per day per diem is probably peanuts for the recipients. So, while the individuals may well be motivated by the desire to serve their country according to their own values, presumably a stint on the NCCC Commission might also be a good gig for other reasons, too — a great way to build and use your networks, for example.

Nev is on the public record as saying that the NCCC commissioners can get the job done in part because he and his mates have a lot of personal contacts. They know who’s who in the zoo, mate, so not to worry about that. They’ve got a stack of other mates, in fact. And, as it happens, a lot of those other mates work in the gas industry.

Back in May, when chatting over Zoom to an audience convened by the Business Council for Sustainable Development Australia and the Trans-Tasman Business Circle, Nev said he and his mates on the Commission will use their contact list and knowledge of who’s who in the industry to work out what they need to help the Government. He noted that leveraging their networks would be done via one-on-one contact and that their collective contact list is pretty extensive in Australia, New Zealand and internationally.

Later, Nev said that the commissioners were “looking for those areas where businesses are looking for solutions to problems and issues that they can’t resolve on their own, then we can help”.

There’s nothing like a mate when you need a solution to your problems. It is a fantastic attitude for a neighbourhood or a footy club, but good governance for the public good demands a higher standard.

The way Nev describes it, I imagine a whole lot of lucky mates are going to have chummy phone calls with Nev and the gang. And what will these mates be talking to each other about? Well, Nev is particularly keen to talk about how to get the big deals going.

‘A lot of major infrastructure projects will be proposed… At the moment we’re looking at… how can we remove barriers to improve the viability of these projects.’

There might be a few pesky rules in the way — maybe the usual sort of stuff that safeguards water supplies and accountability and endangered wildlife, for example. But who cares about those when there’s a deal to be done?

Who’s running the country and where are they taking us? Dr Martin Hirst thinks the Canberra bubble is filling with gas.

It is not surprising that there is growing concern about the NCCC. One eminent lawyer described the situation as “quite alarming”.

The Chairperson of the Centre for Public Integrity, former Judge Anthony Whealy, called for the NCCC to be put on a proper footing with:

“...independent appointments, strong oversight mechanisms and to be established under legislation like any other government body.”

Senator Jacqui Lambie asked Nev Power directly whether he could “guarantee that absolutely nobody in the Commission will stand to personally gain” from any of the projects in question.

Nev’s response was less than reassuring:

“I can’t do that, Senator. I don’t know what their individual circumstances are, it depends on what happens…”

And naturally, what happens all depends on the rules of the game.

David Ritter is an Independent Australia columnist and CEO of Greenpeace Australia Pacific, adjunct professor at Sydney University and an honorary fellow of the Law Faculty at the University of Western Australia. You can follow David on Twitter @David_Ritter.

17 December 2021, 7:00am Despite pledging support for climate action, it's possible one of Australia's big ...

19 November 2021, 7:00am By failing in climate policy, Prime Minister Scott Morrison is also failing in ...

22 October 2021, 7:00am Universities and other large institutions have a responsibility to drive Australia ...
Join the conversation
comments powered by Disqus
News updates