The Australian commercial media are the unacknowledged third force in Australian politics. Arguably they are more powerful than any of the political parties.

Consider the pre-occupations that dominate our politics at the moment.

Islamic terrorists are supposed to be a clear and present danger. Boat people are supposed to be a lurking threat, ever-likely to sweep in and over-run the country, taking our jobs, imposing an alien culture and bringing more terrorists. Roughly half the population does not believe global warming is an immediate or serious threat. (And global warming is almost universally referred to by the deliberately propagated euphemism “climate change”.)

On each of these issues, the dominant public perception is so far from evidence-based reality as to constitute a myth.

The number of fatalities attributable to terrorism on Australian soil is zero or two, depending on whether you think the unbalanced gunman Man Haron Monis was motivated significantly by overseas Islamist causes or was mainly just a nutter seeking attention. Many have compared the terrorism threat with the hundreds of deaths annually from domestic violence, mainly against women. One could make many such comparisons as a measure of where our attention might more profitably be directed.

Even if thousands of boat people arrived on our shores, they would still comprise a small fraction of our immigration intake, which we actively promote. It is legal to seek asylum, the vast majority are found to be legitimate and they typically become energetic, productive citizens. Many asylum seekers arrive by plane, unremarked.

The number of Australians who have gone to fight in the Middle East is, apparently, around a couple of hundred. How many of them might return to walk our streets armed and dangerous, as the Prime Minister melodramatically suggested? We don’t know. What would be the best way to reduce the chances of them threatening us? Well, to be less provocative in our rhetoric and by ceasing to slavishly follow the United States into counter-productive attacks on other countries, would seem logical.

The balance of scientific opinion that global warming is an imminent, dire threat caused mainly by burning fossil fuels is around 99 to 1.

Why do Australians hold to these myths, or delusions, in the face of readily available evidence? To be sure, the myths have been promoted by politicians, particularly since John Howard tried to stop the Tampa in 2001. But Pauline Hanson’s xenophobia would never have spread beyond her minority of supporters without active promotion by the commercial media. The outright lie of calling asylum seekers “illegal” or “unlawful” would have been quickly exposed.

John Howard was an expert dog whistler, but without the attack dogs of the commercial media to whistle up his baleful skill would have been wasted. Tony Abbott is a much less cunning politician, and he would be nothing without the constant confection of alarm and hysteria by the commercial media. The front pages of the Murdoch tabloids in response to the Q&A controversy are but the most recent example.

(Lobbyists for the wealthy should not be forgotten. They would be the other major political force, also dominant over the parties. Though they are less visible and the level of their influence is a bit more difficult to gauge, it is clearly large, as the parties govern more and more for the wealthy.)

The commercial media erupt in paroxysms of outraged innocence at the tiniest suggestion they provide anything but “quality journalism”. They pompously parade the cliches of “independent” journalism as the fourth estate, selflessly oiling the wheels of liberal democracy, keeping citizens informed and governments honest. Presumably they then gather at the bar and laugh uproariously at their own brazen mendacity.

Abbott celebrates austerity of the poor with Simon Benson of the #DailyTonygraph #newscorpse collusion #auspol pic.twitter.com/1tSSyywNEB

The Australian is not a newspaper, it is a propaganda rag in the service of its foreign proprietor and his debased, self-serving world view. For some time, it has conducted explicit political campaigns, being quite open about its ambition to “destroy the Greens”. The rest of the Murdoch stable has also lately sunk to this level, if ever they differed from it. Fairfax is littered with far-right columnists, the products of billionaire-sponsored right-wing opinion factories. Radio shock jocks peddle their hateful, divisive fare for the glory and profit of their egos and proprietors. Commercial TV “news” has ever been little more than infotainment — all colour, movement, shock and horror.

The right-wing bias of the commercial media is nothing new, it goes back centuries, with rare exceptions not owned by the propertied. Our so-called liberal democratic societies have always been seriously distorted by the media’s highly selective offerings.

Australians are said by some to be innately conservative, but how would we know without excluding the tabloid rubbish for experimental purposes? There are plenty of examples of Australians exhibiting such “leftist” tendencies as compassion, tolerance, even knowledge of the subject at hand. Malcolm Fraser bemoaned the lack of politicians willing to appeal to our better angels, as he did regarding the Vietnamese boat people.

The ABC used to provide some balance against the excesses and deficiencies of the commercial media. The decades-long campaign to rein in the ABC and require it to be “balanced” is nothing more than a campaign to extinguish the last major independent voice in our culture — independent of the burgeoning plutocratic police state.

The operative concept of balance includes anything from the extreme libertarian or reactionary right but not much to the “left” of Labor, which crowds the Coalition and is currently well to the right of, for example, Liberal Party founder Robert Menzies.

Malcolm Turnbull, Minister for Communications, recently revealed an attitude that is clearly widespread but usually left unspoken and quite possibly unrecognised, when he claimed the ABC

“... has a duty of objectivity that the rest of the media does not. They can be as opinionated as they like.”

Well, no, Minister. Being able to reach a large audience, by whatever technology, is a great privilege and there ought to be clear responsibilities attached. The responsibilities might include such quaint old standards as being truthful, separating opinion (including judgemental words) from news, and presenting broad and roughly balanced selections of news and opinion. Informed opinion might be distinguished from and elevated above, gut-fuelled, fact-free rants and cherry-picked fringe conspiracy theories. Media might desist from vendettas directed against those of whom they disapprove. Such concepts could be a novel experience for The Australian.

“... having a really intelligent, engaging national conversation around the things that matter most."

Exactly. In our large modern societies we depend on technology to have those national conversations that used to be had around a camp fire or a village pump. It is essential to the health of our society that we have those conversations in as wide-ranging and undistorted form as possible.

We are foolish indeed to allow certain wealthy people to appoint themselves gate-keepers of our national conversation. We are foolish to pretend they are not a major force in our politics. Rupert Murdoch, in particular, bears a large responsibility for the present artificially fraught state of Australian society.

At a minimum, we might require commercial broadcasters with substantial reach, on any medium, to be licensed, as radio and TV supposedly are and to require them to meet essential standards of responsibility as a condition of acquiring and retaining a license. 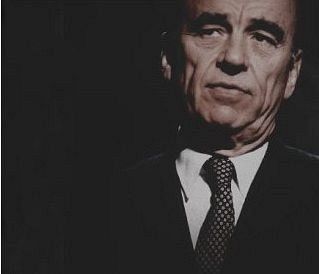 Certainly, the present concentration of media ownership ought to be remedied. The Murdoch empire ought to be broken up. Foreign ownership, however disguised in tricky corporate structures, ought to be eliminated entirely. It’s our conversation and no-one else’s.

A much better form of ownership would be for each media outlet to be owned by its audience, or a substantial number thereof, with a very low limit on how much any one person or entity can own. Such collective, non-government ownership would go a long way towards providing truly “independent” media — independent of both big government and big money.

Our politics and society might then attain, for the first time, some rough approximation to the ideals of an open liberal democracy.

Dr Geoff Davies is an author, commentator and scientist. He blogs at BetterNature (betternature.wordpress.com). The original of the John Graham cartoon featured in this piece may be purchased from the IA store here.

It’s almost as if that’s the exact point of the ABC #auspol pic.twitter.com/BnjsLZPSw9

Help the rise of the Fifth Estate. Subscribe to IA for just $5.