The AUKUS security pact is crippling our nation's sovereignty and perpetuating our position as a lapdog to the United States, writes Dr Geoff Davies.

ONLY ONCE has Australia been actually threatened with military invasion and the bellicosity of an Australian prime minister played a significant part in bringing on that threat. Now another prime minister’s provocations will put us in harm’s way again. Whose interests are served by such blind animosities?

At the 1919 Paris Peace Conference, Australian PM Billy Hughes argued loudly against a Japanese proposal to insert an anti-racism clause into the charter of the League of Nations. Its rejection ensured the League would be a White man’s club, which suited the European powers whose dirty work Hughes was unwittingly doing. Humiliated, the Japanese declined membership in the League and began to prepare for war.

The United States, true to character, is responding to the rise of China with unsubtle military threats. Barely out of its latest Asian debacle, it is charging into the next one, with yapping little Australia joining the rush to confrontation.

The United States’ foreign policy record is one of counter-productive blundering. Its invasions of Vietnam, Iraq and Afghanistan all ended in inglorious retreat and humiliation, which we dutifully shared. 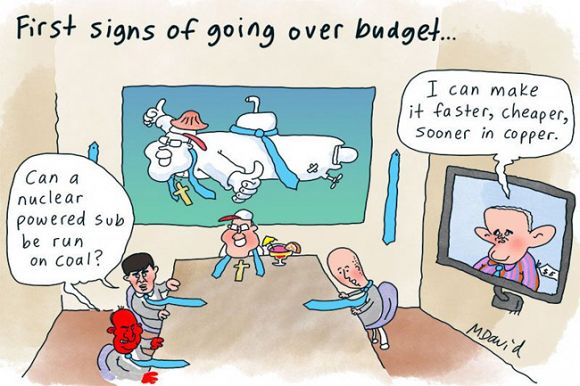 The commitment of the Australian Government to build nuclear-powered submarines is a tale of skulduggery and a game of high risk/high return.

What does the U.S. think it can achieve, short of an old-fashioned nuclear apocalypse? What would Australia have to gain? Losing our trade and being sharply smacked down are among the smaller risks.

China is alleged to be an expansionary aggressor, but it has always moved cautiously and its military-backed moves have only been within its historic sphere of influence. The U.S., on the other hand, has military bases all over the world, has used its military on more than 160 occasions just since 1991 and has interfered in 81 foreign elections since 1946, according to Brian Toohey. It has also overthrown several democratically elected governments in that time and has been almost continuously at war throughout its history.

Talk of shared values among the U.S., UK and Australia, including liberal democracy, is nonsense. U.S. democracy is teetering and ours and the Poms’ are in poor shape. U.S. society is more divided, more fearful, more deluded and more violent. The “shared values” are more about financial elites and the re-emergence of the White man’s club, which our neighbours will not fail to notice.

AUKUS guts most of Australia’s remaining sovereignty. The U.S. is to be given a blank cheque to use Australia as a military staging ground, making us a target. Our strategic posture and operations would be largely determined by the U.S. and industrial support for complex nuclear power technology would be heavily dependent on them. We would be a colony.

According to defence expert Hugh White, the ocean approaches to Australia would be better defended by a larger number of less expensive, quieter, conventionally-powered submarines than by a few long-range nuclear subs, which are for attack. The nuclear-powered subs would be capable of carrying nuclear weapons and adversaries would be forced to assume they were. The move would provoke a nuclear arms race.

Who are the people taking us into this monumental folly? It has been documented that many of the Coalition and their senior staffers have direct ties to mining, arms, finance and gambling. They, along with some social reactionaries and ideologues, have hijacked the Coalition so it bears little resemblance even to what it was in Malcolm Fraser’s day, let alone Robert Menzies’. Fraser resigned from the Liberal Party and Menzies would be thrown out of the Party he founded. 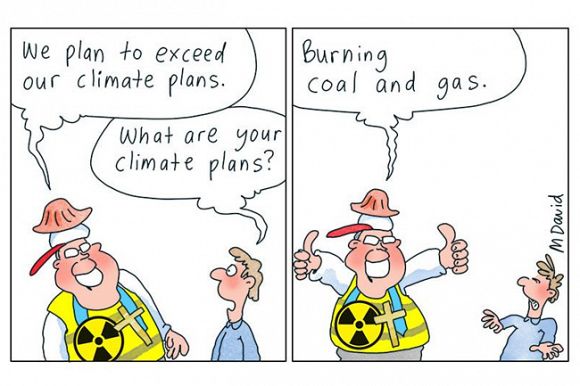 Prime Minister Scott Morrison has further damaged Australia's reputation both overseas and from within his own Government.

Labor has been complicit in much of this erosion of our democracy and many Labor members are also compromised by association with special interests. Many explicitly associate themselves with U.S. interests. It was recently revealed that Bob Hawke was passing intelligence to the U.S. while he was a prominent unionist, deceiving his followers as to his real sympathies and intentions.

The U.S. has tentacles throughout our defence and political systems, and former diplomat Bruce Haigh reminds us its customary mode of influence is to bully. Gough Whitlam threatened the future of the Pine Gap spy station and it is plausible this was a factor that triggered his dismissal, according to Haigh. Certainly, the U.S. was concerned and would have been relieved he was gone. Prime Minister Scott Morrison is inviting them to tighten their grip and we would struggle to break it.

The sad truth is that Australian governments have rarely moved beyond their colonial mentality. With few exceptions, they have served the interests of foreigners, for their own personal benefit but not necessarily for the benefit of their country. If we look past the myth-making, there are clear instances when Australia was very badly served. The AUKUS proposal is a stark example. It is, in substantial part, a gigantic re-election stunt.

We should call out these people for what they are — they are traitors. They betray Australia’s sovereignty to enhance their own power and that of their sponsors, at our expense. They betray us and future generations with their resolute obstruction of action to mitigate global warming.

They are also subversives, subverting our democratic system from within, moving it steadily towards fascist autocracy.

Dr Geoff Davies is a retired scientist, long-term economics critic and commentator on society and politics. He is the author of Desperately Seeking the Fair Go, Economy, Society, Nature and The Little Green Economics Book.