The day the Liberal Party died

Belinda Jones gives us a play-by-play of the events last week in Parliament and the detrimental effect they had on the Liberal Party.

THIS LAST TUMULTUOUS WEEK in politics has been difficult for the average punter to get their head around; even the most astute political observer is having difficulty understanding what went on and why.

Before our very eyes, we all witnessed the political assassination of former Prime Minister Malcolm Turnbull in a fast-moving epic, where even rolling coverage on the television was behind the game. Australians were glued to their social media because the speed at which the information was being shared was almost as titillating as the information itself.

It began with rumblings around Parliament House on the Monday 20 August, on the Tuesday Prime Minister Turnbull unexpectedly declared his position vacant in a party room meeting. Member for Dixon Peter Dutton announced he was challenging for the leadership and had lost confidence in his leader. Turnbull was returned to the leadership in the subsequent vote. The entire Liberal Party accepted the results and threw their support behind Turnbull in a show of unity.

Almost immediately, the bevy of salivating political journalists started speculating about an imminent second strike by Dutton. The Dutton camp were claiming then Prime Minister Turnbull, whom they had just pledged to support, hadn’t played fair. Even though this had been brewing for months, Camp Dutton said they had been caught unawares by Turnbull’s decision to throw the leadership open to a ballot.

This is perfectly plausible, because it was a Tuesday and, as the Bananas in Pyjamas say:

“’cos on Tuesdays they all try to catch them unawares.”

The similarities with children’s characters don’t end there; the politicians did appear to be acting just like B1 and B2 — colourful exteriors consisting of nothing but fluff and controlled by a little man on the inside.

Discontent amongst the Liberals continued to grow throughout Wednesday, like every political journalist’s overtime bill for this week. By Thursday, Turnbull said he’d go, he wouldn’t stand again, but first he wanted a list of 43 — not one less would satisfy him.

I have just been provided with a request for a meeting of the Parliamentary Liberal Party. It has 43 signatures. As soon as they are verified by the Whips, which should not take long, the meeting will be called.

So, it was to be a contest between Dutton, Member for Cook, Treasurer Scott Morrison and Member for Curtin, Foreign Minister Julie Bishop on the Friday.

Crushingly defeated in not only a test of leadership but also a test of loyalty, Julie Bishop bowed out in the first round of Friday’s party room meeting. Scott Morrison was the victor in the second round to become our 30th Prime Minister since Federation in 1901 — an average tenure of about four years per Prime Minister. Morrison was sworn by the Friday night and it was all over. Wham, bam, thank you, ma’am!

First day as Prime Minister and getting on with the job. Meeting with the Deputy PM @M_McCormackMP, my colleague @MathiasCormann, National Drought Coordinator Major General Stephen Day and Chief of the Defence Force General @CDF_Aust. pic.twitter.com/ZeJUxTfx1R

By Sunday, Morrison had played musical chairs with the front bench seats, but mostly things stayed the same. Over the following days, Turnbull announced he would be out of there by the following Friday, a week to the day after he was deposed.

Julie Bishop held a press conference to announce her intention to stay on in Parliament until the next election, giving us all a tantalising cliffhanger to the drama that is her career, the “will she stay on, or will she quit?” question languishes unanswered.

Despite being in the twilight of a stellar career, the mainstream media still thought it pertinent to focus on her earrings and shoes rather than her contribution to public life. I must have missed the articles about what shoes Malcolm Turnbull was wearing at his final press conference.

And so we’re back to Tuesday again and, once again, we’re caught unawares, this time by the Member for Chisolm, Julia Banks’ decision to quit politics at the next election, citing bullying from both her own side of Parliament and Labor. Banks, a "moderate" who had supported Turnbull, has had enough.

All the while, the supporters of this interruption to the status quo of the Turnbull Government, like Senator Concetta Fierravanti-Wells, who implored to the Four Corners audience that it had to be done — “we are bleeding from the Right”. Jones, Bolt, Hadley, Credlin, Kenny, Murray and many others had, simultaneously with Dutton’s Camp, beat their drums to the tune of All About That Bass in a gradual crescendo climaxing at the second party room meeting last Friday. The assumption that their base is “bleeding from the Right” is based on the increased swings to One Nation in the July 2018 Longman by-election.

And they are right, the Liberal Party is bleeding from the Right, but it’s hemorrhaging from the Left.

As Morrison’s first Newspoll results suggest, the swinging voters are moving to the left: 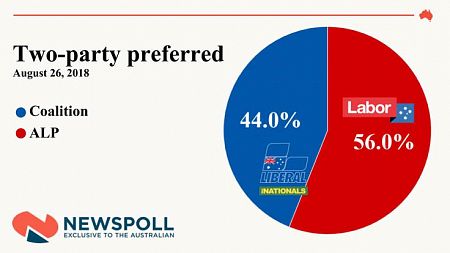 This exodus of moderates is mirrored by the three Liberal Moderates’ departure — Turnbull, Bishop and Banks. Peta Credlin thinks this is just a mere hiccup; she is confident that Australia is in the hands of “one of its own” (so what does that make Malcolm Turnbull?) and all of the shenanigans in Canberra last week will most certainly have been worth it the long run. Credlin continues to push the line “it’s all about the base”, so well she could easily do an extremely convincing parody of Meghan Trainor’s hit song.

Our country has turned an important corner because the Liberal Party is back in the hands of one of its own.

By definition, swinging voters swing Left or Right of Centre and they usually determine the outcome of an election. It is highly unlikely a voter who is fluctuating around the Centre would leap-frog to the Right or far-Right in one fell swoop, yet Camp Dutton and supporters cannot be convinced of this. Humans, by nature, are cautious and move progressively; a Centrist voter, if inclined to do so, will move to a moderate position and then onto a conservative (Right) position and so on to an ultra-conservative position (far-Right), but you try convincing the conservative Right in the Liberal Party Right of this fact. They are so determined to be Right they can’t see that they are wrong.

Scott Morrison’s first days in the top job have been a heady whirlwind of moderate spin and image softening with corresponding reminders of past conservative Right-wing actions and decisions. Morrison’s history in the Immigration portfolio suggests he’s far more conservative than moderate, yet,Newscorp media are peddling the image of a “daggy dad” to complement a cutesy nickname like “ScoMo” to soften his image and suggest he’s a "moderate".

Just lobbed - a general mailout from the PM to subscribers to the Lib website. Keeping the nickname, it seems. pic.twitter.com/8ZSeM6JbnK

The “broad church” that is the Liberal Party is currently split in two. A fault line the size of San Andreas runs through the heart of the Liberal Party, divided by the moderates and the conservative Right, with Morrison attempting to be the bridge between the two. And they will remain that way until the time comes when the Right can be thoroughly convinced that, even though they’re bleeding from the Right, they have almost fatally hemorrhaged from the Left.

Continuing obstinance from the Right on this issue can only end in the death of Menzies’s beloved Liberal Party. These irreconcilable differences seem to be leading to inevitable “divorce” as Bill Shorten described it. The Right are now faced with two choices, try to save this hemorrhaging marriage by capitulating to the moderates or split and start a new relationship with other like-minded Conservatives outside of the Liberal Party, meaning the death of the Liberal Party.

The death rattle of the Liberal Party can be heard echoing throughout the corridors of Parliament House in the infancy of Morrison’s prime ministership — a Party on life support. Time will tell if Morrison is the miracle man to save them.

Kindergarten Cop and the 45th Parliament of Australia https://t.co/oRUFhY6wer via @YouTube #auspol