THE GOOD FRIDAY SHOOTING at the Manus Refugee Processing Centre (RPC) caused shock in Australia and Minister for Immigration and Border Protection Peter Dutton was quick to blame it on actions on the part of the residents. Last night, ABC Lateline cited a new leaked report from Wilson Security, which claimed a shotgun had been fired directly fired into the detention centre, not into the air as the Department of Immigration had previously claimed.

But in messages obtained exclusively by Independent Australia, it is clear that local MP for Manus Ronny Knight predicted these disturbing events accurately. His warnings to the Department of Immigration, however, went unheeded. Had appropriate measures been subsequently implemented, violence against the Regional Processing Centre and its inhabitants may have been avoided.

'This whole situation is so volatile our governments do not realize the potential for the whole island to erupt in violence. I have heard that there is to be a major protest by locals and am trying to get more info on it and to get control of it. We have only 30 police on the island and a riot cannot be controlled.' 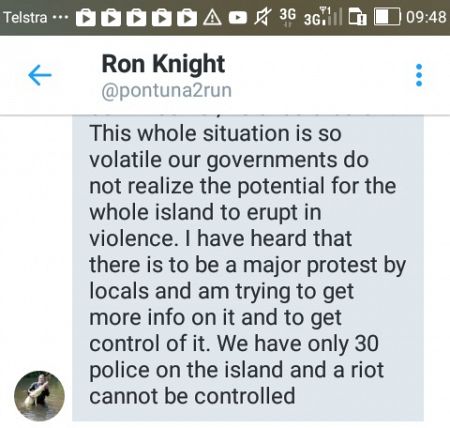 'I am truly concerned now for the safety of all refugees... there will be much bloodshed and violence. All refugees should stay in their compounds from today onwards until I can address situation.' 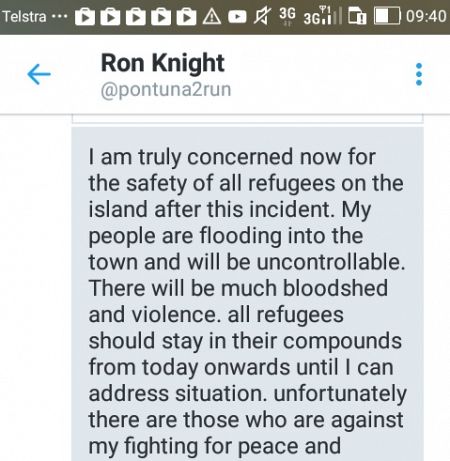 Ron Knight sought a meeting with Foreign Minister Julie Bishop during her March visit to Papua New Guinea to discuss his concerns. His request was denied.

In an exclusive interview with Independent Australia in January, however, he remained dignified under the strain:

"We expected much more in terms of assistance and infrastructure development. We got 800 or so jobs for locals, though menial. We are glad for what we are getting, though we see that it's not much more then the normal Australian aid type of assistance."

Mr Knight has been pleading with the Australian Department of Immigration and Border Protection to speed up the processing of refugee claims within the Manus RPC – a facility that has become unsustainable for the local community – and to resettle it's residents.

His Twitter feed is reflective of this. There he pleads for the UNHCR to intervene to step in and take control:

I am apologizing to UNHCR on my countries behalf and humbly ask them to step on and take control of their mandated charges. The need help

He's well-liked by many of the refugees in the RPC, where he counts the community leaders amongst his friends. They return the favour where they can; one is trying to fund raise to repair the Manus roads, another is helping ease simmering tensions between the refugees and the local community. It seems obvious to him, however, that the plan by The Australian Department of Immigration and Border Protection to resettle the refugees in Papua New Guinea isn't one that could, or should, be followed through on.

It's clear when chatting with Mr Knight that his job description now differs greatly from what he signed up for. The complexities of his role as the elected political representative of a region used as a dumping ground for unwanted people by the Australian Government cannot be understated.

He describes incidents of violence between the Australian RPC workers and local civilians:

He mentions the case of the local employee of the RPC, who was allegedly drugged and raped by Australian guards who were subsequently flown back to Australia before police could interview them, then brings up the death of Reza Berati.

"The last two guys seen kicking Berati in the head were [Australians]. We have heard they are now working in Thailand. How, then, are two Manus boys now serving time for this... when the inquiry had 17 persons of interest?"

Mr Knight is determined to see justice for his people:

"With the criminal aspect of the camp management, that is an ongoing issue I am always pushing."

Knight is clearly and understandably frustrated:

"We see that Australian employees have no respect for our laws. Rape and murder suspects flown out before police can question them. Pay structure of employees is horrendous. Locals receive terrible pay, [Australian workers] receive up to AUD $14,000 each payday. For the same job. Also our IPA laws [are] ignored, allowing illegal security guards to be flown in. Basically when it's over we will have nothing left except the camps, which are temporary. Where is the township they originally promised to build?"

We expected Australia to respect us and treat us as if we were Australians.  We have illegal dumping of toxic waste on agricultural blocks at Salamei, which now have contaminated the water table. The waste is from the camp rubbish. The asbestos is from the old buildings and the liquid waste is daily pumped into a truck and taken out to Salamei and disposed in the craters they illegally excavated for road fill. The kitchen and toilet wastes are very toxic. They also facilitated illegal removal of gravel and coronous from these state lease blocks for road fill, instead of securing and opening a gravel pit.

The roads are substandard, and only have one coat of bitumen which we expect to deteriorate rapidly. Hospital assistance; we need medical supplies. Machines for use. Upgrade our theatre. Basically everything... We need what we asked for.

Is Australia not touted as the land of the fair go?

Mr Knight sounds resigned, devoid of optimism as he concludes:

"We would appreciate any help we can get."

I predicted all that has come to pass and this is the most stupid batshit crazy stunt that could be pulled. There is no option they must go

When Dutton and Turnbull pretend to care about drownings whilst torturing survivors https://t.co/7jBr98t90Q