'Make no mistake: we unlawfully invaded a sovereign state.'

DOCUMENTS produced under Freedom of Information (FOI) laws by the Department of Defence confirm that Australia was caught off guard when the permanent representative of the Syrian Arab Republic wrote to the United Nations Security Council (UNSC) on 17 September 2015. In that missive, the Syrian representative singled out Australia, the United Kingdom and France for taking military measures against the Syrian Arab Republic and asserting that our reading of Article 51 was “blatantly inconsistent” with the Charter and UNSC resolutions. 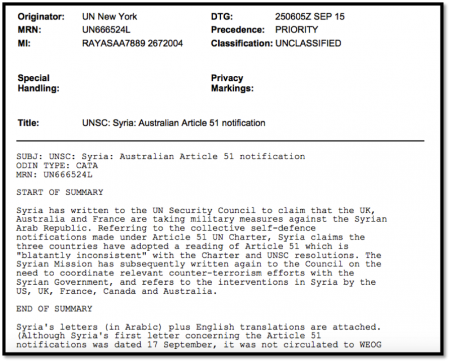 To see the full set of documents produced under Kellie Tranter's FOI request as a PDF, click HERE or on the image above

Article 51 of the Charter of the United Nations recognises the inherent right of the states to act in individual or collective self defence where an armed attack occurs against a Member of the United Nations. States must be able to act in self-defence when the government of the state where the threat is located is unwilling or unable to prevent attacks originating from its territory.

The Government of Syria has, by its failure to constrain attacks upon Iraqi territory originating from ISIL bases within Syria, demonstrated that it is unwilling or unable to prevent those attacks.

Not one journalist in the country – although I’m happy to stand corrected – asked either the prime minister, the foreign minister, the attorney-general or the defence minister to explain how the Government of Syria was "unwilling or unable" to prevent attacks.

What are we doing in Syria? https://t.co/zF3V30oGRH @IndependentAus

In its letter of 17 September 2015 to the United Nations Security Council – unreported by mainstream media – the Government of Syria responded to Australia’s assertions by saying:

In accordance with its constitutional duties, and on instructions from the Syrian Government, the Syrian Arab Army has, over the last four years, indefatigably fought such armed terrorist groups as Islamic State in Iraq and the Levant (ISIL), the Nusrah Front and other organisations associated with Al-Qaida and supported by Turkey, Jordan, Saudia Arabia, Qatar and certain well known western states, which arm, shelter and train the terrorist groups.

Any actor that genuinely wishes to fight terrorism in Syria must recognise the achievements of the Syrian Arab Army and the Syrian armed forces in combating terrorism, and must coordinate with them.

The claims, particularly those made by the Australian letter, are belied by the actions taken by the Syrian Arab Army to combat ISIL, the Nusrah Front and other armed terrorist organisations. Such claims are foolish, mendacious and need not be dignified with a response. Indeed, the so-called international coalition led by America has yet to achieve anything tangible in its war on the terrorist organisations. On the contrary, it has allowed the terrorist organisation ISIL and its satellites and allies to expand, move and deploy freely, not only in Syria and Iraq but also in Egypt, Libya, Yemen, Tunisia, Kuwait and Saudia Arabia, and even at the heart of certain Western States whose behaviour and political discourse encourage their terrorist actions ... ’

The Syrian response seems to have put the cat amongst the pigeons. A series of cables were sent to and from Canberra and the Permanent Missions of Canada, France, UK and U.S. noting that ‘if partners were minded to respond to the Syrian letters in writing, we would propose a coordinated response’ and that it was Australia’s initial view that ‘we did not see utility in a response, but if there was a response, it should be a coordinated one.'

In other words, let’s gather in a huddle and get our stories straight.

The documents produced under the FOI laws relating to the legal basis for the use of force in Syria are, more or less, redacted in full, so we can't directly critically examine the validity of the basis of the position taken by our government. However, given that Article 51 has been the only legal authority relied upon, it's difficult to see how our involvement could have been other than illegal.

Legal expert Olivier Corten wrote an extensive paper, ‘The "Unwilling or Unable" Test: Has it Been, and Could it be, Accepted?’, in which he noted:

Australia was reluctant to support the legality of strikes in Syria without the clear consent of this state’s government. This position began to change in August 2015, when the prime minister asserted that: "While there is a little difference between the legalities of air strikes on either side of the border, there’s no difference in the morality."

If we understand him correctly, it is thus for moral reasons that, progressively, Australia accepted participation in the coalition. From this moment, the Australian legal advisers began to endorse the "unwilling and unable" test in order to justify the strikes in Syria, a test that eventually appears in the letter sent by Australia to the Security Council on 9 September 2015.

Most alarmingly – particularly just before the dawn of the Trump era – Corten concluded:

If we follow the conception of international law as reflected in the letter sent by the U.S. to the Security Council in September 2014, every state would be allowed to launch a military campaign on another state’s territory, under the sole pretext of the ‘inability’ of this state to put an end to the activities of a terrorist group. The main element founding the "necessity" to riposte would be the existence of an ongoing armed attack against a given state (Iraq, in the case at hand), but also of a threat, whether imminent or not, against an undetermined number of other states.

The UK, and later France, considered that targeted strikes could therefore be allowed to put an end to the preparation of criminal activities that could take place on their respective soils. For each of these strikes, it would be for every state to determine if the situation is serious enough to trigger a right to use force on the territory of another state, without ever being obliged either to ask the government of this state for its consent, or for the Security Council to assess the situation and take appropriate measures. Whatever one might think about the opportunity to establish such a new legal order, it goes without saying that its acceptance by the international community of states would lead to a radical change, if not to the end, of the UN system.

Olivier Corten: unable and unwilling test does not provide a basis for military attacks on ISIL in Syria #ESIL2015 pic.twitter.com/5yQlksTIQ1

Where it can be demonstrated that Syria is unwilling or unable to prevent ISIL launching attacks against Iraq from its territory, there would be a defensible legal argument that Iraq, the U.S. and other countries are lawfully able to take action against ISIL in Syria on the basis of collective self-defence. There is a reasonable and objective basis to be satisfied that Syria, while willing to take some action against ISIL, is unable to stop attacks against Iraq from its territory.

That seems to be a pretty thin argument in reality — and doesn't gain any credence from the characterisation "defensible legal argument".

Yet in a document titled ‘ADF Operations in the Middle East’ (departmental information valid as at 21 September 2015) under the subheading, ‘Coalition strategy in Syria’, it states [emphasis added]:

Government took the decision to participate in air operations against Daesch in Syria based on the assessment that Daesh will continue to attach and threaten Iraq from there. The situation in Syria is complex. There are multiple conflicts involving different players-including the Assad regime and numerous rebel groups-with different objectives and different regional and international backers. The prospects for a political or military solution are poor. 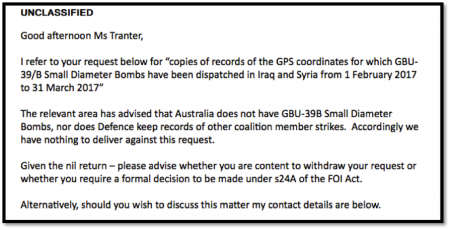 To see the full set of documents produced under Kellie Tranter's FOI request as a PDF, click HERE or on the image above

Which begs the question, what on earth was the Australian Government really thinking, or trying to achieve?

Documents released by the Department of Defence confirm that we have ADF embedded personnel at U.S. Central Command (CENTCOM) in Tampa, Florida, to participate in the execution of any U.S. operations against ISIL in Syria.

'The possibility of ADF embedded personnel at U.S. CENTCOM contributing to the execution of any operations against ISIL in Syria is high ... Conversely, allowing involvement is a genuine and valued contribution to the relationship ... ’

"Contributing to the relationship" doesn't sound to me like an assessment of any relevant consideration under Article 51.

In his first press conference after his election victory in October 2015, Justin Trudeau announced that Canadian fighter jets would withdraw from U.S. missions against Islamic State.

Perhaps Trudeau accepted the 2014 view of the Canadian Minister of Foreign Affairs that [emphasis added]:

[T]he democratically elected government of Iraq has asked the world for assistance and has asked Canada to participate. This initiative has obviously been before the United Nations Security Council, where the prime minister showed great leadership by speaking, as I did at a previous Security Council meeting, in the last two weeks. It obviously has the blessing of both the UN Security Council and the government of Iraq. We do not have any legal authorisation in Syria. As despicable as the political leadership is in Syria, and with respect to the motion before Parliament, we obviously do not have any legal basis at this stage for that effort.

"It is illegal for Australia to bomb Syria."
MP Andrew Wilkie says it's a very bad, reckless and dangerous decision. pic.twitter.com/rxHgJoqLWC

No such announcements were forthcoming by the then "moderate" Prime Minister Turnbull.

Now, just a few years down the track, we have seen the images of some of the heartbreaking carnage wrought by the fighting in Syria: human suffering on a grand scale, rotting corpses in the streets, the bodies of small children washed up on foreign shores after fleeing the insufferable conditions in their country and an ancient birthplace of civilisation reduced to rubble.

Make no mistake: we unlawfully invaded a sovereign state to contribute to that. Both the Coalition Government and the lacklustre Labor Opposition are complicit. Either they remain ignorant of the illegality and, in my view, immorality of their actions, which is hard to accept, or they choose to put the issue to one side while pursuing some agenda we aren't told about, like "contributing to the relationship".

Consistent with the lack of open debate in Parliament before such measures are taken, the redactions of the FOI documents about why the government chose to do what it did make it clear that the government doesn't want us to know. By shutting the door of openness and transparency – which seems to have become the norm on many contentious domestic and foreign policy issues – they seek to deprive us of our right to examine and hold them accountable for what they do.