Europeans are amazed Obama won the presidential election ― but not for the reasons you think. France-based Australian Alan Austin reports. 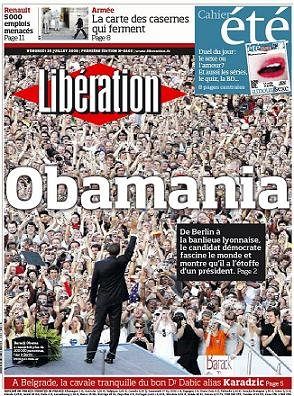 Surprised and delighted, you could say. But also dismayed ― at troubling aspects of the campaign.

The overwhelming response across Europe has been elation.

French President François Hollande offered Obama his “warmest congratulations” ― as did other leaders.

Hollande summed up why the re-election was so welcome; Obama, he said:


“…is fully engaged on the international scene and well aware of current global challenges: peace, economy and the environment.”

The economy is the principal reason Europeans are relieved. Despite its recession during the global financial crisis, the US remains the world’s biggest economy by a fair margin. The EU and the US generate nearly a third of global trade. So there is, in some ways, an interdependence.

A dossier spécial in le Monde diplomatique feared that a Republican victory would have weakened Europe’s ideological resolve. Obama’s defeat


‘…would be immediately interpreted as a failure of progressive strategies of Keynesian stimulus and health care reform.’


‘He showed that federal aid can contribute to economic growth.’

The Republican strategy of “making this election a referendum on how the President had managed the economy” was parfaitement sensée (perfectly sensible). Le problème, however, was that they “did not appear more credible in this area”.


Visit NBCNews.com for breaking news, world news, and news about the economy

Close second to the economy as a reason to celebrate Obama’s win was global security.

‘Un soupir de soulagement’ (a sigh of relief) was the response of Le Figaro’s Jean-Jacques Mevel. That and “fingers crossed for the future”.

‘There is concern about the precedent that a second-term US president is more interventionist in foreign policy”’, Mevel noted. ‘The next term is likely to be more aggressive.’

But this was more portent than warning:


'The US is tired of divisions over Euroland’s inability to end the interminable Greek ordeal.'

Laurent Zecchini’s report from Jerusalem pondered “whether Obama will be tempted to take revenge, and if so, how”. He quoted an Israeli diplomat troubled by Netanyahu’s “bet on the wrong horse”. Israel’s “capital at the White House has been squandered”.

Not surprisingly, Netanyahu was quick to applaud Obama’s win and promise collaboration to “ensure the vital interests of the security of the United States and Israel”.

While the economy, global relations and the environment were causes for celebration, two election issues trouble Europeans. Both are present also in Australian politics.

Jacob Weisberg at Slate.fr was dismayed that personal moral and religious concerns such as marriage, contraception and abortion featured so prominently.


‘It is curious these are considered more critical than anything else by some people. More important than employment or public debt.’

‘The fact that you are pro-choice or pro-life is nobody else's business,’ wrote Jacky Terrasson in Newsring.fr.


‘Talking about rape and abortion in terms used by Mitt Romney’s team is unacceptable for a segment of the population, including centrist voters.’

Philippe-Joseph Salazar expressed bemusement at the place of religion in the election campaign. He noted Romney’s concession speech:


‘I will pray for him [Obama] and our great nation.’

“Seen from France this is so comical”, the philosopher observed.

Commentators were also disturbed by the extent of les mensonges flagrants (the blatant lies) of the Republicans during the campaign. In Europe, this is usually punished with shaming in the media and banishment from public life.

Pierre-Yves Dugua at Le Figaro referred to Romney’s false allegations that Obama planned to slash military spending “by hundreds of billions of dollars” and disarm America. “Military spending under Obama has increased slightly,” he noted. “Democracy cannot come from waging this war of lies.”

How can a party so seemingly committed to biblical values be so laissez-faire about bearing false witness? This is an intriguing question in, mostly, post-Christian France.

Do Europe’s responses hold challenges for democracy in the U.S.A.? And, indeed, in other nations with parallel political processes and similar media systems ― such as Australia and Great Britain? In all three countries, these disturbing political phenomena – alien to virtually the rest of the developed world – of religion-based morality and frequent lying seem embedded in the political right.

Why have so-called “conservative” parties embraced stacking lie upon lie so enthusiastically? What is the role of the media in calling politicians to account? Does having sections of the press which also routinely distort and fabricate encourage this mendacity?

Will this significant election loss by the Republicans prompt a rethink in this area?