Australian politics is in a holding pattern.

The Government circles around and around, but it never gets anywhere and it never lands. At times it seems sure to consume itself in a fiery ball, or run out of fuel and crash, but it never quite does. So the plane of state keeps circling, lower and lower, trailing smoke and sparks, battling through gales and headwinds, with lightning crackling all around it.

In the cockpit, over the intercom, debonair Captain Turnbull attempts to reassure the panicked passengers behind him:

“Please remain calm. Everything is perfectly in order. In fact, it is better than perfect. Despite facing some challenges, such as a severe electrical storm, losing one of our jet engines and being completely rudderless, this aeroplane is achieving substantial success and is well on course to deliver outstanding results for all passengers.”

The pilot takes his hands from the controls to airily emphasise his point.

Screams are heard in the back as the plane drops 200 metres before the controls are casually collected again and the plane slowly levels out. The urbane Captain smiles confidently at a startled flight assistant who has rushed into the cabin to investigate. She backs away slowly, her eyes wide.

Around the runway the aeroplane circles, narrowly missing hills and tall buildings as it sinks ever lower each time.

Beside the Captain sits new Co-pilot McCormack. His teeth are chattering and his face is white. He is awash with perspiration. McCormack is frantically reading the plane’s instruction manual. This is because he is totally unqualified to fly an enormous jet aeroplane, being only a fresh-faced trainee at the academy, only there for the ride.

He had been suddenly promoted from economy class after the previous co-pilot had truculently resigned his commission. There had been a nasty argument between previous Co-Pilot Joyce and the Captain about some of the former's behaviour towards the cabin crew. Now Joyce is in first class with a stewardess on his lap, a tie wrapped around his head, sloshing a half-full glass around, tunelessly bawling ‘The pub with no beer’.

Despite the hasty promotion of Trainee McCormack, Joyce hasn’t ruled out a return to the flight deck. Meanwhile, as Captain Turnbull whistles cheerily, McCormack continues sweatily thumbing through the manual as he looks around the panel in confusion.

“This manual is so gay!” he is heard to mumble to himself.

A voice crackles over the radio. It is the control tower.

“This is the Canberra Control Tower to LNP000, do you copy?”

“I most assuredly doo,” intones the Captain in his euphonious rounded vowels.

“You have now done 27 circuits of the airfield. You only have three circuits left before your loss of height means you will have to land,” crackles the transceiver.

“Never fear,” replies the skipper. “We shall simply jettison some fuel to lighten the weight of the aircraft and allow it to gain altitude. I will just let it trickle down and all will be well.”

“Wait... what? Why on earth do you think that will work!?” squawks the controller.

“Oh, it’s just Aeronautics 101, you impertinent fellow! Haven’t you ever read the Institute of Plane Altitude newsletter?” Turnbull snarls and petulantly flicks the radio receiver off.

The plane continues circling. Seeing the city lights coming closer and closer, the economy passengers look fearfully at each other. Up in first and business class, however, the mood is buoyant and relaxed, with the cabin crew are still circulating, lavishing smiles, and aperitifs, and delightful appetisers on all and sundry. To all except one jug-eared man in first class, who is nodding his head maniacally, his eyes fixed on the door to the cockpit, as if he might suddenly make a dash for it at any time.

A burst of lightning shakes the plane. The Captain begins to hum ‘Hard to be Humble’. The passengers at the back of the plane grimace and begin to assume the brace position. 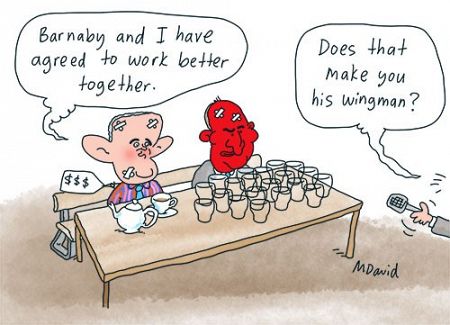 This is only half the story! The other IA editorial this week (the more serious one), originally published as part of the Independent Australia weekly subscribers' newsletter, may be read in the IA members only area. It includes the full response from ABC Audience and Consumer Affairs to our recent complaint about ABC Media Watch and is available to all subscribers. It takes less a minute to subscribe to IA and costs as little as $5 a month, or $50 a year — a tiny sum for quality journalism and many other great extras!

10 February 2021, 9:00pm It is hard to escape the conclusion that the Australian people are being actively ...
Join the conversation
comments powered by Disqus
News updates