The corporate tax cut "plan" is dead — so what comes next? Managing editor Dave Donovan comments.

WE ARE getting down to the fag end of this Government.

The time of desperation. The time of difficult choices. The time when corpulent sweaty men in dark suits in smoky backrooms make hard and ruthless decisions.

Or if winning is seen as impossible, a different set of choices. Such as: How do we poison the well and leave a ticking time bomb? How do we get as many of our agents installed in Government agencies as we can? How do we shovel as much money as possible into our friends’ deep pockets before the Treasury door is bolted?

Or maybe the red-eyed men, deep in their jowls and cigars, will decide that winning is possible, but unlikely, and so they will have to exercise both sets of options at once? To blow up everything in the hope some of their bedraggled soldiers are the last ones standing.

The latter option, it would appear, is what, in the dim backrooms of private clubs, the heavy men with fat cheque books have decided what must be done.

What will they do to win?

They have already decided to ditch the unpopular corporate tax cut and make a deal with the One Nation white nationalists. Don’t believe the spin that Pauline Hanson has backtracked on her deal with the Liberals to pass this proposed tax grab by big banks and multinationals. The truth is, this corporate tax cut was already dead, with the two crossbench votes the Government needed already lost beyond redemption.

In fact, the Liberals needed One Nation to kill off this profoundly unpopular tax cut to allow them to save face. At the same time, One Nation needed to reject the corporate tax cuts to bolster their faltering chances in the upcoming Longman by-election in Queensland.

The truth is, Pauline Hanson’s One Nation is a de facto member of the ruling Coalition. Both she and her puppet-master, James Ashby, are former Liberal Party members. Hanson was once endorsed to stand in the seat of Oxley by them. Ashby worked as a Liberal Party mole to destroy Peter Slipper while working as his staffer. The proof is in the pudding: One Nation votes with the Government almost all the time.

Pauline Hanson hates big business tax cuts so much that her puppeteer likens them to lifesaving medical treatment. pic.twitter.com/XE4ClZACp2

Who will they bribe or pay-off?

With the corporate tax gone, $80 billion worth of potential bribes flows back into the Turnbull Government’s pockets. And they will use them just like they did during the Howard years — to bribe middle-class voters. What they call “aspirationals” — not the poor and those struggling to make end meet, they never vote conservative anyway. They will bribe those already on decent incomes, who want to keep more out of their fat pay cheques each week.

The Coalition has already promised to flatten the progressive tax system for those voters. Now with $80 billion flowing back into the kitty, there is plenty of scope for middle-class welfare in the forthcoming election. The Government hopes greed will help sway a few per cent of the undecided vote their way.

It just might work, too. It’s the only reason people ever vote for them anyway, after all.

Who will they try to smear and destroy?

Bill Shorten, of course. He is already rather unpopular with voters, but they will try to make him unelectable. The slurs began years ago, but the pitch of them has risen to shrieks in recent times.

The new attack revolves around the CFMEU, one of Labor’s biggest donors — as good reason as any to try to vilify. Currently − even though the AFP case against CFMEU boss John Setka referred by the politically charged Trade Union Royal Commission witch hunt has spectacularly collapsed and he is looking at suing the Police − the Government and its News Corp propaganda wing are using this new publicity to attack the Opposition Leader. Shorten is presented as being controlled by the “criminal” Setka and the “lawless” CFMEU.

The truth is, there being no evidence either has ever done anything other than try to protect the rights of their members. But facts don’t matter in the smear game — just keep repeating the calumny until the lie is embedded in the minds of the ill-informed.

This is only half the story! The full length version of this editorial, originally published as part of the Independent Australia weekly subscribers' newsletter, may be read in the IA members only area. It takes less a minute to subscribe to IA and costs as little as $5 a month, or $50 a year — a tiny sum for such superb journalism and a host of other extras! 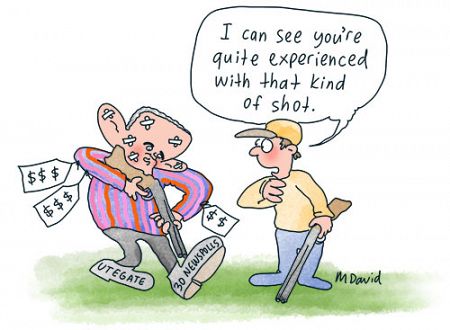 I think this story out of Senate #Estimates today is so wild. Govt gave $450m to a non-profit group backed by corporate Australia with only six full time staff to protect the reef. No tender process. https://t.co/EOKCe0N6Jp

Coalition says there is no 'persuasive evidence' federal Icac needed - STRONG signal they won't set one up despite ongoing consultations. #auspol #auslaw https://t.co/hrYZOuoCIb