Economic health is about more than just financial growth

Politicians, economists, activists and assorted VIPs from all parts of the world have just met for the United Nations sponsored Wellbeing and Happiness: Defining A New Economic Paradigm summit. Professor John Wiseman reports. 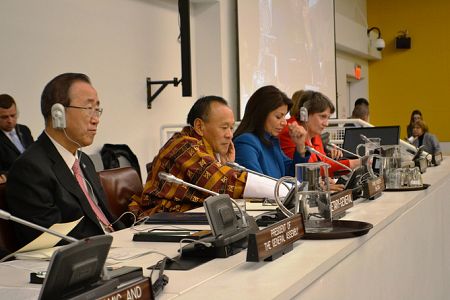 Answer: They were just some of over 600 delegates including heads of state, Nobel laureates, spiritual, business and community leaders who contributed to the opening of the recent United Nations High Level Meeting on Wellbeing and Happiness: Defining A New Economic Paradigm.

This landmark meeting, convened by the Prime Minister of Bhutan, Jigmi Y Thinley, followed on from the 2011 UN General Assembly motion calling for governments to promote polices focusing on sustainability, happiness and wellbeing as opposed to narrower definitions of economic growth measured solely by the expansion of GDP.


An economy that serves humanity

Prime Minister Thinley opened the meeting by noting that


“...the GDP-led development model that compels boundless growth on a planet with limited resources no longer makes economic sense. Within its framework, there lies no solution to the economic, ecological, social and security crises that plague the world today and threaten to consume humanity. We desperately need an economy that serves and nurtures the wellbeing of all sentient beings on earth and human happiness that comes from living life in harmony with the natural world, with our communities and with our inner selves. We need an economy that will serve humanity, not enslave it.”

There was, of course, considerable debate about the potential for cynical, simplistic responses to happiness and wellbeing as core goals of public policy. And there was also broad understanding that care must be take to respect the different meanings that people from diverse cultures give to these ideas.

But there was also a widely shared understanding that whatever words we choose, the time has come to value, measure and implement an economic model which Prime Minister Thinley characterised as “sustainability-based, wellbeing-centric and inclusive”.


Rocking the boat: towards a new economic paradigm

The following sketch of key contributions to this historic event provides an overview of key ideas and priorities discussed.


“The grim reality is that our planet has reached a point of crisis. The time for us to act is rapidly running out. We are facing what could be described as a ‘perfect storm’: the combination of pollution and over-consumption of finite natural resources; the very real risk of catastrophic climate change; unprecedented levels of financial indebtedness, and a population of seven billion that is rising fast."


“...as the Prime Minister [of Bhutan] said … it is hard to rock the boat, but rock it we must. As it happens, I have been doing a spot of rocking myself for a considerable number of years, precisely because I have felt the globally accepted systems of accounting for success – whether in terms of profit, or GDP – are not providing the right information for governments, businesses and other organisations to take the right decisions, given the challenges we face in the twenty-first century.”


“Those attempting to guide the economy and our societies are like pilots trying to steer a course without a reliable compass. We are almost blind when the metrics on which action is based are ill-designed or when they are not well understood."

Professor Stiglitz mounted a powerful case that the time has come to move beyond GDP as the dominant measure of human progress by finalising agreement on the introduction of a more integrated set of ecological, social and economic goals and measures.


“Gross National Product (GNP) has long been the yardstick by which economies and politicians have been measured. Yet it fails to take into account the social and environmental costs of so-called progress. We need a new economic paradigm that recognises the parity between the three pillars of sustainable development. Social, economic and environmental wellbeing are indivisible. Together they define gross global happiness.”


“GNP by itself does not promote happiness. The US has had a three time increase of GNP per capita since 1960, but the happiness needle hasn’t budged. Other countries have pursued other policies and achieved much greater gains of happiness, even at much lower levels of per capita income.”

OECD chief statistician, Martine Durand noted that the dimensions which need to be considered in a more integrated set of progress and well-being measures include: income and wealth; jobs and working conditions; health; the time we have to devote to families and friends; our ties with other people in the community; our capacity to act as informed citizens; the quality of the environment; our experiences of violence and victimisation.

Professor Robert Putnam, speaking at the Columbia University workshop which preceded the UN meeting, drew on extensive new empirical evidence to emphasise the crucial role which social connectedness and the capacity to be part of trustworthy social relationships play in the creation of flourishning and sustainable communities and organisations.


"The current economic model based on the limitless exploitation of the earth’s limited resources is doomed. We now face a historical tipping point at least as significant as the dismantling of the Berlin Wall."

Likhotal’s speech included a number of specific policy suggestions of particular relevance to Australian climate change debates. We need, he argued, to


“...create an alliance of the ‘early birds’, the speedy frontrunners who will be the 'game winners' of tomorrow”. There is no need to wait, as everybody – including traditional energy suppliers – will heed this call. The 'carbon justice' approach can propel low-carbon technologies to the South. An alliance of champions on effective climate policy from America, Europe, Asia and leading 'developing countries' (90 per cent of the world’s population) can help provide the revolutionary shift needed to recalibrate our economy, protect our environment and achieve a truly sustainable development."

Dasho Karma Ura, director of the Centre for Bhutan Studies and Dasho Karma Tshiteem, director of the Gross National Happiness Commission of Bhutan: The true meaning of happiness and wellbeing lies in our relationships with our families, friends and communities, rather than in the endless consumption of material possessions. At the same time, a more enlightened recognition of the true sources of human happiness and fulfilment are also a necessary foundation of overcoming our broader ecological challenges.


A sustainable pathway for the 99%


"We must move rapidly from words to action if the 99% are to find a path to a future that is both just and sustainable. One important step will be to convene an international forum capable of forging agreement on the key principles and institutions for a new, sustainable economic paradigm – a Bretton Woods agreement for the 21st century."

Prime Minister Thinley concluded by reminding the gathering that “business as usual cannot go on and tinkering with the existing system will not do… we need a fundamental transformation”.

He also emphasised that this was just the beginning of an extensive work program designed to turn words into action by building support for alternative political and economic policies. The next steps in this process are likely to include the establishment of an International Commission on Gross National Happiness as well as detailed policy proposals to be presented to Rio + 20 in July and the UN General Assembly in 2013.

The meeting closed with prayers from senior Hindu, Buddhist, Christian, Jewish and Muslim spiritual leaders. All of them called for an awakening of the awareness that the rapid implementation of a new economic paradigm is an essential precondition for ensuring that we are to able pass on a sustainable way of life to our children and grand children.