Do you have Trump Derangement Syndrome? It really is deplorable!

Political editor, Dr Martin Hirst, confesses to a slight obsession with “The Donald”, but, he argues, it is not what you think.

I AM MILDLY OBSESSED with following the news of President Donald Trump. There’s part of my brain that still has trouble processing the fact that this low-rent reality TV “star” actually won the 2016 U.S. election. I really don’t think he could have done it without Russian help.

My fascination with Trump is borne out of my long and deep interest in politics and world affairs. It is impossible for me – a child of the Cold War – to ignore the historic role of the U.S. President as so-called “leader of the free world”. I know that this is an ideological trope that hides a century of imperialist aggression and mass slaughter (by the “fine people” on all sides), but it holds a certain truth because it is a boast backed up by the world’s largest arsenal of nuclear (and conventional) weapons of mass destruction.

Trump’s instability and his fat, little fingers hovering over the launch button should be grabbing the attention of most half-woke people. We are literally one Twitter meltdown away from Armageddon. However, I do not believe my dedication of serious thinking time to the Tangerine Fascist in the White House is a case of “Trump Derangement Syndrome” (TDS).

In mid-July, the pro-Trump Fox News personality (I use that term loosely), “Judge” Jeanine Pirro was on Whoopi Goldberg’s TV chat show (Why, Whoopi, why?) and they got into a slanging match. In a widely-reported exchange, Pirro accused Goldberg of having “Trump Derangement Syndrome”.

What Pirro meant by this is that Goldberg’s criticism of Trump – which verges on visceral hatred, like it does for many of us – is unwarranted and that inability to cope with the Trump presidency is a sign of mental illness.

This is the definition that you get from a quick check of the Urban Dictionary:

Trump Derangement Syndrome (TDS) is a mental condition in which a person has been driven effectively insane due to their dislike of Donald Trump, to the point at which they will abandon all logic and reason.

Symptoms for this condition can be very diverse, ranging from hysterical outbursts to a complete mental break. TDS can also often result in the sufferer exhibiting violent, homicidal, or even genocidal desires.

Sufferers have also been known to wish direct self-harm on themselves (such as increased taxes, a desire for an economic recession and even nuclear war), provided that an action might in some way hurt Donald Trump.

That the entry was written by a Trump fan, most likely dressed head-to-toe in MAGA merch (which is mostly made in China and Bangladesh, BTW), is not surprising — the term did start with the pro-Trump lobby back before the election. 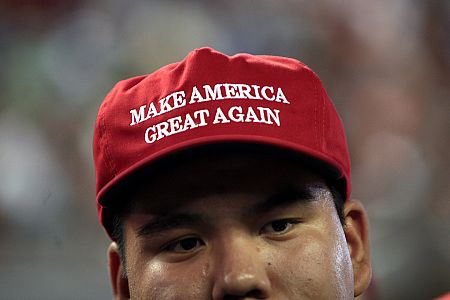 USA! USA! *Made in China (Image via Wikipedia)

'Bitter hatred is a dangerous emotion: It destroys one's objectivity and judgment. When journalists become true haters, the results can be cringe-worthy. Presently, there seems to be a hate-induced epidemic sweeping the nation's journalists — call it "Trump Derangement Syndrome." Infected pundits have been spewing idiotic, unsupported and intemperate opinions, even vulgar outbursts, about Donald Trump. Ironically, this is only helping The Donald.'

You get the point. Meister is sympathetic to “The Donald” and, who knows, maybe they’ve done business or hung out.

As you know, I like to be thorough, so I checked out Mr Meister.

Here’s a sample of his earlier work for the Washington Examiner:

As an attorney who's worked for Trump (I have not represented him for the past year and a half) — and many years ago, against him — his success on the campaign trail comes as no surprise: Trump's a man of exceptional tenacity and guts, insightful intuitions, clear purposes, an intelligence that's expressed forcefully and directly, always without regard to political correctness and a world class negotiator. Trump intuitively understands what troubles Americans and boldly states their concerns; I guarantee he'll never be an appeaser of foreign governments; there'll be no Neville Chamberlains or hapless apprentices for domestic or foreign policy, in his administration — if you're not doing your job, you'll be fired.

This piece, from a week before the TDS article, is headlined 'A personal assessment of Donald Trump' and this how it ends:

‘In a match up against Sanders, Clinton or Biden, the GOP is better off with Trump, whose business experience, successes and star power can overpower an ageing socialist, a corrupt dynastic politician, or the vice president of the most pathetic administration in modern history.’

As you might have guessed, the Washington Examiner is a very conservative and pro-Trump publication.

So, TDS has become a signal catch-cry for the Trumpsters and it allows them to vent and troll those of us who don’t swallow the party line parroted by Trump supporters.

It has also made its way to Australia thanks to the imitative behaviour of certain Newscorpse agitprop recyclers, who ran out of original insults several election-cycles ago.

Luckily our good friend @thekennydevine was on hand to document it for those of us who are blocked by the best and brightest of the Murdoch hacks.

Australia has quite the panel of experts on Trump Derangement Syndrome...#brainstrust pic.twitter.com/yNhJ3z3qhH

TDS has become a meme-worthy go-to deflection tactic for Trump supporters, who hate the fact that some of us are willing to call out the President’s erratic behaviour — behaviour that I have previously argued verges on potential mental illness or brain injury. It’s fair to say I believe that the Donald himself is possibly suffering from undiagnosed Trump Derangement Syndrome.

Reclaiming TDS for the sensible side of this debate

You know it’s time to address an issue when Trump tweets about it.

Some people HATE the fact that I got along well with President Putin of Russia. They would rather go to war than see this. It’s called Trump Derangement Syndrome!

This tweet kick-started a wave of explainers in the news media that attempted to define and contextualise Trump’s tweet. The Daily Dot piece sets out the history of the “syndrome” in a calm fashion, and points out that it has become weaponised by both Trump supporters and critics.

CNN got in on the act and re-upped an interesting piece from 2016 by Trump booster Justin Raimondo, which is still relevant, but not for the reasons Raimondo espoused two years ago.

In the first stage of the disease, victims lose all sense of proportion. The president-elect's every tweet provokes a firestorm, as if 140 characters were all it took to change the world.

The mid-level stages of TDS have a profound effect on the victim's vocabulary: Sufferers speak a distinctive language consisting solely of hyperbole.

As TDS progresses, the afflicted lose the ability to distinguish fantasy from reality.

FYI, Justin Raimondo runs a website called AntiWar.com, but it is a gaslighting operation that simply regurgitates pro-Trump and pro-Russia nonsense, such as this recent piece which attempts to equate Trump’s disgraced former campaign manager, Carter Page, with Julian Assange and to argue that they are ‘martyrs to the cause’. The “cause” is taking the plunge into the rabbit hole of “deep state” conspiracy theories.

Just take a second to reflect on Raimondo’s definition of TDS symptoms.

If you look at these three “symptoms” with a cool head, you can’t help but reach the (quite valid) conclusion that they more accurately describe Trump supporters who cling to the President like demented barnacles.

In other words, it is TDS that makes hardcore Trump supporters what they are.

Trump’s “deplorables” are willing to believe Trump’s obvious lies and to be willingly gaslighted and led by the nose, and Trump himself is pouring fuel on this already raging dumpster fire.

Just this week, Trump’s ongoing campaign to confuse and corral his base moved to a new level. The President of the United States told his supporters not to believe anything they see or what they read in the news.

“The party told you to reject the evidence of your eyes and ears. It was their final, most essential command.”

In other words, Trump told his supporters that they should only believe him and what he says. That he alone is capable of defining truth. This is a descent into Orwellian doublethink and echoes down through history as the favoured tactic of dictators who want to goad the faithful into mass hysteria and unquestioning loyalty to “the leader”.

This is also the point of Trump’s incessant tweeting about “witch hunts” and conspiracies to undermine his legitimacy.

It is unlikely that Trump himself believes that there is a conspiracy and he almost certainly knows (because he’s implicated) that the Mueller probe is a real threat to his continued occupancy of the White House. However, by casting doubt on the legitimacy of the investigation and constantly muddying the waters with chump bait, Trump hopes to deflect attention away from his own crimes and to mobilise the deplorables to defend him.

Beyond that, the desired effect is to make it so difficult for interested observers to get to the truth that they give up and stop looking. If the allegations of collusion and Russian interference can be reduced to a “he said, she said” back and forth, the truth and import gets lost and people switch off.

The other form of TDS is the one on display at Justin Raimondo’s AntiWar.com website. It is a delusion shared and fostered by some on the “libertarian”, “progressive” side that, somehow, Hillary Clinton would have been (and still is) somehow worse than Trump.

I find this form of TDS intriguing because it is combined with a form of politics (Libertarianism) that objectively helps Trump, while subjectively claiming to be independent and challenging the left-right dichotomy.

The founders of Antiwar.com were active in the Libertarian Party during the 1970s; in 1983, we founded the Libertarian Republican Organizing Committee to work as a libertarian caucus within the GOP. Today, we are seeking to challenge the traditional politics of “Left” and “Right”.

The totalitarian liberals and social democrats of the West have unilaterally and arrogantly abolished national sovereignty and openly seek to overthrow all who would oppose their bid for global hegemony. They have made enemies of the patriots of all countries and it is time for those enemies to unite — or perish alone.

These two statements, in consecutive paragraphs on the AntiWar.com ‘About us’ page, are totally incompatible and simply highlight that conservative (anti-Left) nature of the site’s intent.

The ideology behind this politics – and made explicit at AntiWar.com – is disorienting to newcomers and ultimately politically sterile as a form of intervention.

In the end, it is just another form of Trump Derangement Syndrome and, like the hardcore of deplorables, those most infected are in denial about their condition. Perhaps TDS is related to Dunning-Kruger Effect too — certainly, it is one psychological diagnosis of Trump that appears to have some credibility.

In the past week, the mainstream media has made the reasonable link between Trump’s gaslighting operation and George Orwell’s 1984, in which the propaganda of Big Brother could be adjusted to ensure that the Inner Party was always in control of the narrative.

Ensuring that his supporters – the real victims of Trump Derangement Syndrome – keep drinking the Kool-aid is a key strategic aim of the pro-Trump media and his top officials.

Everything else – inconvenient facts, actual truth, or contradictory narratives – is just shovelled into the memory hole to be burnt and erased from history.