Lachlan Barker discusses why coal seam gas (CSG) is no longer a viable energy option, both from an environment and economic perspective.

CSG IS NOT – and never will be – financially viable for NSW.

Recently a story appeared in The Australian highlighting the appalling trouble gas company Santos is in.

I read that with great interest and as the tale unfolded, it began to dawn on me that the fight against coal seam gas (CSG) in NSW is now over.

There were/are four CSG projects in NSW. AGL had two, Gloucester and Camden, Metgasco had one at Bentley on the Northern rivers just west of Lismore and Santos has the remaining project, at Narrabri in the far north-west of NSW.

AGL gave up on Gloucester once they realised it was not financially viable and with that decision, the economies of scale needed to make Camden work were lost, so they decided to close that down as well.

Metgasco ran up against red-hot opposition on the Northern Rivers and were eventually sent packing by the furious locals, which left only Santos at Narrabri.

Now, NSW resources minister Anthony Roberts and Santos themselves are still frantically trying to convince the general public that the Narrabri gas project is viable.

Essentially – and as ever with these gas projects – it comes down to money, and more specifically, Santos’ lack thereof (Santos ASX code is STO). 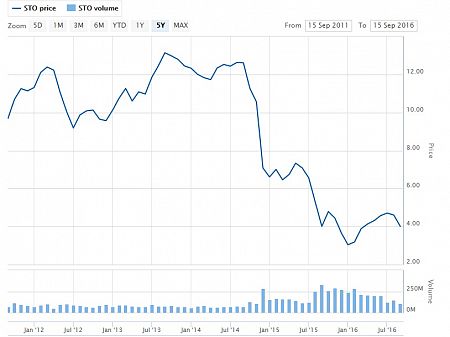 The Narrabri gas project is rated by Santos as a $2 billion dollar project, yet the story in The Australian quotes Macquarie discussing possible financial solutions for Santos as so:

Last week, Macquarie’s analysts claimed the remedy was either a sale of its stake in the Exxon-operated PNG LNG project, or another blockbuster equity raise. If Gallagher opted to sell off the crown jewels, Macquarie argued, management could bank $US2.7bn, enabling it to repay a €1bn subordinated note as well as a portion of its $US1.7bn export credit facility.

So on the one hand, Santos are selling off the crown jewels – a financial term for the best asset in a portfolio – to raise US$2.7 billion (AU$3.6 billion) to retire debt.

Then in the next breath, Santos would have us believe they are going to suddenly increase their debt again by US$1.5 billion (AU$2 billion) to start Narrabri, which is an unknown quantity and would be years away from producing gas at commercial scale.

And even then I have serious doubts about that $2 billion price tag for Narrabri that Santos quotes. I say — paraphrasing Mr. Mackey from South Park, Oh it’s worse than that.

To give you a measure of scale, recently QGC announced they are going to open a new gas field on the Darling Downs, Charlie field.

This gas development is rated at $1.7 billion and includes 300-400 wells, a compressor station, pipe infrastructure and the like, plus claims of 1600 employees during peak construction.

Santos’ Narrabri project is projected to have 850 production wells.

But then in 2013 the Australian Petroleum Production and Exploration Association (APPEA) upped the ante saying:

‘The average exploration cost in Queensland (reflecting both conventional and CSG targets) has increased from less than $1million per well in 2008 to almost $3 million in 2013.’

So if we go with that, it would cost Santos $2.5 billion just to drill the 850 production wells — clearly money they don’t have.

If you want a general proportional multiplier, the Charlie field with its 300-400 wells cost $1.7 billion, so Santos with 850 wells will have to spend (minimum) $3.6 billion to build an 850 well production field with field compressor station and gathering pipes at Narrabri.

Santos has a current net debt of $6 billion so they are hardly going to suddenly send their debt skyrocketing back up to $9.6 billion to open a field that is not even certain of its productive capability.

Last note on the Narrabri project — even Santos themselves don’t think this is worth anything, having written the value down to zero in their last annual report for the year ending December, 2015.

Finally, there is one other CSG project in NSW that I better deal with since we’re in the far west of the state.

I didn’t mention it above as this project is so nebulous and non-viable that it hardly rates a mention.

The “company” is called Paradigm Resources and is supposedly a collaboration between the local Indigenous people and the resources industry. 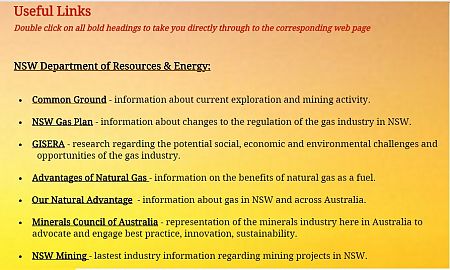 As you can see, it is really the NSW State Government, APPEA, the gas companies (GISERA) and the minerals councils of Australia and NSW.

Clearly, this is a cynical political ploy to front another gas project with an Indigenous façade, in an attempt to make it harder politically for the opponents of gas in NSW to counter.

However, it is neither here nor there as all of the financial non-viability of Santos’ Narrabri project applies here as well.

Details are sketchy – actually non-existent – at this point; however, if we apply the Charlie field comparison here we once again see the issue.

Say Paradigm decide to open a production field with 300-400 wells, then that group of entities listed on the useful links page has to find $1.7 billion dollars to get this thing moving.

Currently, Paradigm is not listed on the NSW Planning Department’s Major Projects website: 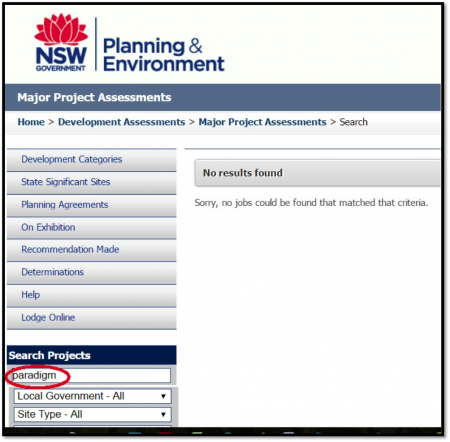 The only commercial entities on that useful links list are the gas companies themselves and, as listed above, Santos don’t have any money to invest.

Origin likewise are in a mountain of trouble — they have $9.5 billion of debt and are currently debating whether to sell their LNG business, APLNG.

Finally, QGC (that stands for Queensland Gas Company by the way, now owned by Shell) are hardly going to suddenly invest $1.7 billion in a gas field to provide gas for NSW.

So at the end, it is only with the wildest optimism that the last CSG project in NSW, Santos’s Narrabri project, could be described as active.

Santos themselves have written its value down to zero — a further reflection of the growing industry-wide understanding that CSG is not financially viable.

Thus, the Baird Government can make all the gas exploration licences they like available to companies in NSW but no company will take them up, having seen what’s happened with Santos, Metgasco and AGL.

Make no mistake, CSG is finished in NSW.

For sure, anyone who visits the gas chambers of the Darling Downs cannot still think #CSG is safe.#nswpol #qldpol https://t.co/deFcZTmLJM

#Baird gas plan 'dead in the water' as AGL gives up on coal seam gas https://t.co/CqEXSlNHnx