Michael Galvin sends a message to Opposition Leader Bill Shorten, pleading with him to show courage not to become Australia's version of Mitt Romney.

Have you noticed the way the steady stream of negative publicity about you has suddenly started to intensify?

Brace yourself, I think you are in for a lot more of it.

Do you remember Mitt Romney?

He was the nice-enough guy who was convinced that he was going to consign Obama to the dust-bin of history. He was so confident, he didn't even bother to prepare a concession speech.

Do you remember one of the main election strategies Mr Nice Guy Obama used to defeat Romney? Obama went in hard and went in early with a costly, dirty campaign to paint Romney as an elitist, out of touch, plutocrat.

Obama's successful strategy was to paint a picture in the electorate's mind of and about Romney before Romney himself had a chance to portray himself. Once the paint on that picture had dried, Romney could do very little to change it.

This is the bad news for you, Bill. For whatever reasons, you have spent nearly eight months on the sidelines of public consciousness. You have not been able to spend this time building a strong personal identity in words or actions. Perhaps your tactic has been to give Abbott enough rope and expect that the dangerous weirdo will hang himself, and put us all out of our misery.

The tactic has half worked.

Abbott has enough rope to hang himself and everyone else in his party room, but I don't see him swinging from any tree just yet.

That is why you are now going to get the Romney treatment. We are going to hear endless negative stories about you.

The current Union Royal Commission is just the start.

We know that Abbott and his claque are world leaders in the art of negative and unfair political character assassination. Why is it possible that some of this mud will stick and you will not be able to present a credible alternative to the Libs?

First, because they will use the tiniest shreds of stuff about you (union history and links, for example) to damn you. And, secondly, there was a vacuum there which they will fill with their own bile.

Sadly, you have not done enough in the time you have been leader to make a strong, multifaceted, positive impression on swinging voters who care very little about politics, or enough of the Labor base who do take an interest and hate what they see about Abbott's Government.

Bill, in short, you are being Romneyed.

And it is partly, if not largely, your own doing — as it was Romney's.

But all is not lost.

You are about to have your make-or-break moment. The new teams in the ballgame are about to start playing. Actions will now speak louder than words. Abbott's dreadful Budget measures will be either defeated or passed in the Senate.

Two things have to happen for you to avoid Romney's fate.

One, all of the Budget measures that are unfair to ordinary voters must be defeated in the Senate. This is a sine qua non for you. You cannot fail to deliver on this.

And two, you will have to show that you are the deft and strategic leader who can work with the Greens, the Palmer mob and sundry others to achieve this outcome.

It won't be enough to defeat these measures if the Greens and/or Clive Palmer end up all over our TV screens talking about how they have defeated Abbott and saved the Australian people from disaster.

It is a bad outcome for you and Labor if it appears that you are being dragged or led by – rather than leading – the minor parties in the gunfights that we are about to see in the Senate.

Whether you like it or not, you are going to have to get your hands dirty. (All of those players will want something in exchange for their vote; why else would they bother turning up?)

If you can pull this off, if the public believe in six months' time that it is Labor – led by you – that was in control of the situation in the Senate, who did the dirty stuff and wheeling and dealing in the backrooms to get the required votes, then there is every chance that you might avoid Romney's fate.

The battle is imminent. The issues are clear.

This is penalty shootout time.

Victory or defeat, your moment has come, whether you are ready or not. 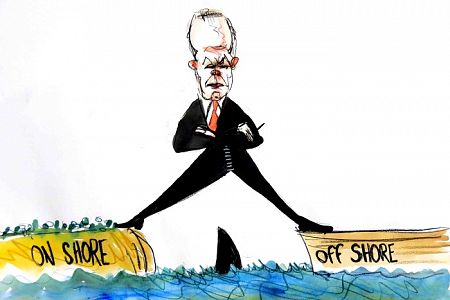 15 May 2019, 12:00pm Prime Minister Scott Morrison may be on track to lead the conservatives to an ...
Join the conversation
comments powered by Disqus
News updates