Disunity, disloyalty and incompetence abound as the L-NP abandons its chosen messiah and stumbles to the end of its season in power, writes Geoff Dyer.

WITH THE L-NP TERM nearly over, receiving terrible reviews and slammed by critics for lack of policy, plot, character and action, the Morrison Government is floundering in the polls. Star player, Prime Minister Scott Morrison, is already being mooted as “the worst PM ever”.

Backstage, it’s a mess. Infighting has surfaced, Deputy PM Barnaby Joyce is eating his own words and a new faction has formed supplanting “the big swinging dicks” — they call themselves “the wee chamber-pot men”. Unsurprisingly, lead women in the Coalition are keeping quiet or running for cover.

“No comment”, “it wasn’t me”, “I don’t accept the premise of your question” or “I’ve never known Scotty to lie” are the only lines being issued by the PMO.

Things are so dysfunctional that bagging China is the only way to get a solid “Hear! Hear!” of approval from the back bench. Yet, the “troupes” are no longer keen to man the turrets.

With multiple ministers washing their hands of their responsibilities, saying they did do what they didn’t do and didn’t say what they did say, the Parliament has descended into an absurdist theatre. 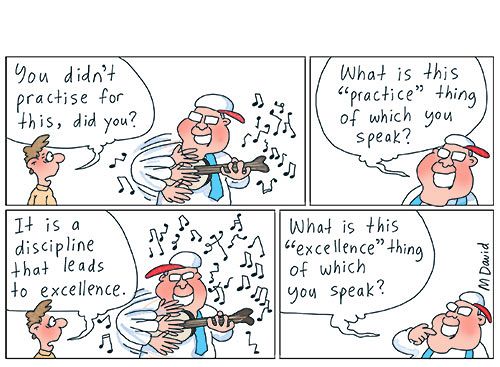 Coalition gaffes galore to the tune of an off-key ukulele

The Prime Minister's abysmal ukulele performance is a parable for the off-key tune by which the Coalition governs Australia.

This difficult to define, anti-government Government, with its anti-policy policy, seems to be rushing through the last act with minimal thought for the performance, or the legislation. Even their state colleagues are worried about what they’ll botch up next.

On stage, the Opposition’s attacks are mounting and the Liar From the Shire, having deployed all the clichés and meaningless language at his disposal, is losing Party support and is being driven to distraction (distraction being his favourite tactic when cornered).

For Morrison, the situation is dire, the audience is heckling from the gallery, shouting out “I don’t hold a hose, mate”,  “It’s not a race” or “If you have a go, you get a go”. The PM would be well advised, under this barrage of sledging, to either exit stage right or don his Australian flag mask and say no more.

Audiences love charades, but this charade has obviously had too long a run.

With the chips down, the PM, as the protagonist, knows it is time to break a leg — but as the climax approaches, he isn’t feeling lucky. Trying to save the show, he has already thrown several dead cats on stage to re-engage the audience, (religious discrimination amongst them, though it was thrown straight back at him). The one about kids on forklifts almost worked and his laying on of hands at the hairdressers completely took integrity behind the curtains for a day.

But what comes around goes around and the atmosphere became tenser backstage when the L-NP cast realised that Murdoch, up in the heavens, had walked out before the last act had started. 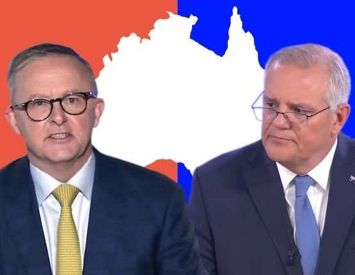 The big question is, will Morrison’s villain smirk, his ability to beat up fear of China and offering to bigots the opportunity to discriminate against LGBTQI communities be enough to steal a second term? It’s hard to know. But lately, some of Scott’s most damning critics are part of his own cast. The backstage chatter is scurrilous and malicious, everyone avoiding eye contact and whispering, “out, damned Scott”. Some are even threatening to tell the truth in their post-politics autobiographies.

Nor are his supporting cast of ministers big fans. They’re either not going off to work or falling off the front bench. Most of them prefer a day at the cricket, tennis, footy or gun club rather than joining Scotty on the hustings, or in after-dinner prayer for electoral success.

Even on the way to his own dressing room, Morrison can hear the stage crew grumbling, “something wicked this way comes”. References to “The Scottish Play” are frowned upon by Scotty, especially with Malcolm Turnbull making regular Banquo-like appearances in the media and commenting on his success in the role of PM.

A battler, Morrison is shaken but not stirred. The “Man from Marketing” has stepped up on centre stage, playing fast and loose with the truth, but it’s obvious he hasn’t memorised the script, constantly slipping back into his award-winning role as Pinocchio when the role requires the Pied Piper. The RATs have left the ship and his performance is disappointing, to say the least.

Morrison’s understudies are impatient for the final curtain and are waiting in the wings, eager to take the leadership. Two aspiring actors are leading the off-stage jostle for the Prime Ministers role — Dutto and Frydo. Both have openly declared their loyalty and affection for Scomo and are standing right behind him.

“He said, she said” Defence Minister Peter Dutton (affectionately called “Potato Brother” by his Chinese counterparts) is manning the tank turret to defend Australia from Labor. He’s willing to beat up fear of both Labor and China in the audience and spend billions of dollars supporting American arms dealers — to create a bit more drama and tension in his play for the top job. 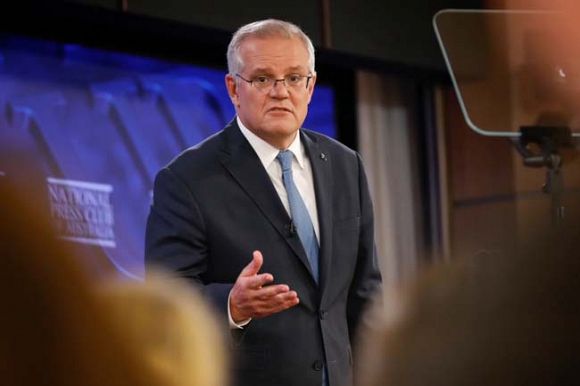 Dutto can hardly wait; he’s leaking like a sieve in anticipation of an early shot at the crown. Nothing comes of nothing if you don’t give it a nudge in the right direction. He’s sure Australia needs a khaki election and he’s the man to deliver.

“Deep pockets” Treasurer Josh Frydenberg, having left billions of free taxpayer money in billionaires’ bank accounts, is hoping for a bit of tit-for-tat support in his run for the lead role. In Parliament, he’s begun strutting his stuff, ad-libbing (lying) about “death duties” and “taxes” while rolling out the barrel for election investments.

Frydo could come through as the favourite. He has impressed on the floor of Parliament trying his hand at character assassination. His fellow players appreciate he’s at least aiming at the opposition. Furthermore, he’s shown a willingness to corrupt the system to ensure no advisors get to help super funds make socially responsible investments. A brave move amongst all the calls for a federal integrity commission. (He was booed off the stage when he attempted to pass this one off as having “integrity”).

As for Morrison, the writing's on the wall. It’s as clear as the nose on the man's face that it’s time for him to move on. He’s already been having a go by auditioning for new roles, getting sudsy at the hairdresser's, trying out a collection of very convincing tradie costumes, sitting on a forklift and kicking the footie down the road desperate to get another go. Dud politicians never willingly retire, they simply lose the plot and are ushered by their cabinet to the trap door.

In this chamber of the absurd, “we are all born mad. Some remain so”.