SUBSCRIBE   DONATE LOGIN SHOP
SUBSCRIBE   DONATE
How we prevented a Morrison dictatorship
How Howard screwed the Libs
U.S. site tries to ruin what makes fairy bread great
Bloody Idiot of the Week — Episode 28: Get used to it
Morrison's 'politics of retribution'
Media Editorial

News Corp suddenly promoting climate change action is just another example of how Coalition governments and establishment media operate in tandem to create and control the political narrative.

Many are viewing this unexpected Murdoch media about-face on the subject of climate change with optimism and relief.

But for those of us who have been watching closely, it also seems possible, even likely, that this sudden awareness of climate change by News Corp signals a new and more sophisticated greenwashing of the political discourse.

It is certainly unlikely that the editors and producers of Australia’s most ardent climate-denying publications and media outlets awoke to a collective epiphany and thought, “Wow, the sun appears hotter today — we should report the science on climate change!”

What, then, is behind this instantaneous and coordinated editorial campaign shift?

After the most spectacular implosion of the New South Wales Government, the resignations of the Premier and her Deputy have all but disappeared from view. It's as though being implicated in corruption investigations over a period of six years and then choosing to just give up the highest public office role in the state, instead of facing the music and clearing one’s name, are of no consequence.

After a week of sickening sycophantic farewells to Gladys Berejiklian, uttered in all corners of the media as though she was stepping down due to the onset of a tragic terminal illness, instead of the reality of her own alleged unscrupulous deeds catching up with her, the subject appears to be closed.

John Barilaro, himself no stranger to corruption allegations, has likewise vanished from the media landscape, despite his sudden and inexplicable exit following Berejiklian's by a matter of two days.

And the litany of corrupt and questionable conduct on the part of Federal Government parliamentarians, such as Christian Porter, Angus Taylor, Bridget McKenzie and Sussan Ley, to name a few, has also magically evaporated from our screens and news feeds.

We now have Barnaby Joyce, safely ensconced as Deputy PM (again) as though nothing ever happened, being interviewed on the ABC about the Nationals’ "climate policy" — a futile search for the holy grail, surely, in the party of mining interests and the largely vacant mind of its current leader.

On the non-Murdoch programs that appear somewhat progressive, the likes of The Project’s Waleed Aly joined the ridiculous fanfare that followed the Gladys exodus with inexplicable gusto.

Why do you have Steve Price on as a guest joint host?

Why do you feel like you need to pander to white conservative dudes and don't believe in science? https://t.co/Q0CZxZsIJq

And Steve Price, ever the poster boy of climate denial, weighed in to direct us to his mate Andrew Bolt – who continues to rant about the climate change "lie" – and to correct our mistaken assumption about News Corp with this:

“... Both sides of the climate debate have always been prosecuted in the Murdoch papers.”

Apparently, this was not satire. It did, however, serve a dual purpose. Firstly, Price's claims attempted to legitimise the rancid anti-climate-change drivel that has spewed forth from his employer for years on end as somehow being about "balance", of course. But also, it managed to conjure the existence of a so-called “two-sided debate” — when there has only been scientific consensus on the fact of global warming since the 1980s.

INVENT A DISTRACTION ... OR SEVERAL

Meanwhile, the ever-present targeting of Daniel Andrews, Annastacia Palaszczuk and other Labor leaders continues full steam ahead in every News Corp gutter rag, Sky News "report" and associated establishment media outlets. Regurgitated stories of past ALP MPs, union members or anyone else associated with Labor ever found to have done the wrong thing have also magically reappeared with nauseating regularity.

As well, the idiotic ramblings of Victorian Shadow Attorney-General Tim "no idea" Smith against Premier Dan Andrews have been given a hearing in all manner of publications and media outlets, even though he freely admitted to having "no idea" about whether there was any substance to his accusations.

Then there are the ongoing accusations directed at progressive non-parliamentarians who dare to speak out against the Government and the media, such as Australian of the Year Grace Tame. Tame was accused by the non-partisan publication (ahem!) The Australian, of supposedly 'politicising her position', being 'divisive' and 'exhibiting dirty partisan politics' for calling out, among other things, that most divisive of politicians, Pauline Hanson.

Firstly, what is the point of holding the title of Australian of the Year if not to politicise the issues for which you advocate? And secondly, Pauline Hanson! 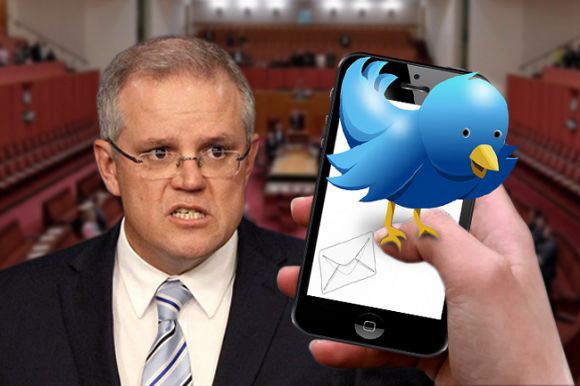 And then there's Morrison's latest tirade against social media. That's the one where he is outraged by mean and anonymous social media accounts — but not when the anonymous and mean social media behaviour comes from his own MPs.

The more cynical among us know that nothing is as simple as it appears with News Corp. This latest so-called "shift" is simply another News Corp public relations campaign designed to give the nod to Scotty from Marketing so that he can hold his head up on the world stage under a pseudo-climate action policy "change".

We need to consider, too, what happened at the last supposed "climate election". That's the one where we were fed Newspoll statistics and evidence of the electoral importance of climate change to the degree that many assumed it would be impossible for the climate-denying Morrison Government to be returned. Yet here we are.

As former PM Kevin Rudd tweeted, this is how Murdoch can:

Cynically pretend to one audience you now support climate action while still allowing Bolt’s denialism to rage to the other!

It's all simply part of the old "let's change tactics to create a new, more convenient political narrative" trick from our most insidious instrument of climate denial.