LOOK! UP in the sky! It’s a tram. It’s a train. No, it’s Andrew "Ferry McFerryface" Constance being parachuted into the federal electorate of Gilmore because Scotty "Hardhat McFluro" – this strange "liar from another shire" – has convinced Constance to have another go despite the train-wreck of his career in state politics.

As the PM finally pulls the ripcord on the Federal Election and fills the skies with captain’s picks – 'deplorables, backgrounders, liars, underminers and Liberal acolytes' – he has chosen Andrew Constance as his first weapon in the fight for the Lodge and continued access to government perks.

And this is the Liar from the Shire to a tee! pic.twitter.com/JJpdMmzVeg

It’s shocking that in an age of accountability, best practice and merit selection, we not only pre-select and elect but continue to re-elect politicians with a proven record of incompetence. Constance can definitely claim such a record. When he started running as a Liberal candidate for Gilmore, journalists should have asked him what he was running from.

As NSW minister for transport, he was not fit for purpose — nor were the trains, ferries, or light rail he bought from overseas. He cost NSW taxpayers billions of dollars in "fixing" transport problems and left the public with a crippled transport system. 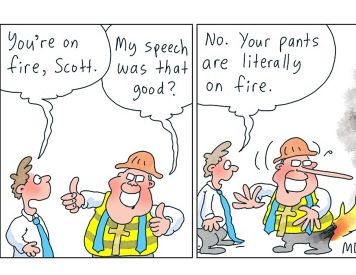 His “achievements” include a train fleet too wide for tunnels, ferries too high to get under bridges and trams that were a different width from the trams on the inner-west line, so they could not be used to keep the route running.

I hope the irony of Mr Morrison opening his re-election campaign with a $40 million "bribe" for local roads in the Gilmore electorate – while spruiking for a man who wasted billions as the minister for transport – has not been lost on the voters of Gilmore.

“Andrew has... a great deal to offer at the federal level, especially given his experience in the NSW Government."

What planet is Scotty "Hardhat McFluro" from? For all our sakes I hope he’s not putting McFerryface in charge of climate and bushfire prevention. On form, one could assume Constance might buy cheap flammable fire engines from overseas, firefighting planes that don’t hold water and then chop down all the trees within a kilometre of a road so they can’t burn.

To cover up his mistakes he could go down the road of firing a competent public servant, paying out hundreds of thousands of dollars in severance pay, only to then rehire him for another job at twice the price!

To be fair, Constance has his good points. Firstly, he can hold a hose, something that Scotty has difficulty with despite having been photographed with every other tool in the workshop and having done some flash welding for Australia. And like many of us, he experienced the trauma of bushfires.

Secondly, like many Liberal and National party MPs, Constance has had moments of honesty and clarity when talking about the Prime Minister. For instance, saying the PM received "the welcome he probably deserved" when confronted by locals in the fire-ravaged town of Cobargo, on his return from Hawaii.

But Constance has also engaged in "political gymnastics", telling us what an excellent job Scott Morrison has done during the floods.

In another moment of honesty he said:

"It took a bloody big fire to make me realise how wrong politics is in this country."

Constance wisely decided to resign from politics but said he’d wait until after the bushfire recovery effort was completed to make sure no victims were forgotten.

There’s the rub — with many bushfire victims still struggling and forgotten, Constance got out of there. He is now back and announcing, alongside the PM, millions of dollars for roads in the seat he aspires to.

His efforts to get back on the political gravy train should be judged in light of his past failures and his present lack of understanding of what Scott Morrison has put on the table. Typically, the standard you walk past is the standard you accept.

Scott Morrison got it wrong during our latest natural disasters like he’s done so many times before. He’s sitting on a close-to-$5 billion emergency response fund, while people are still living in caravans and have not rebuilt their homes since the bushfires — thousands of flood victims are homeless. Apparently, it’s a fund of “last resort.”

Morrison tells us that the last three years have been really tough: there’s been droughts, floods, fire and a pandemic. Yet, he and his Government have been late, inactive, disinterested, or absent — absent on disasters, vaccinations, housing, aged care, climate change, childcare, domestic violence, fairness and integrity.

Look! Up in the Sky! Slower than a raging fire, sneakier than a rising river and able to change the truth into multiple lies in a single speech.

The strange "liar from another shire" – who, disguised as Scotty "Hardhat McFluro", can dam mighty rivers without a plan and bend truth with his marketing skills – is out in Gilmore to offer you his recycled captain's pick: Andrew "Ferry Mcferryface" Constance.

Slow clap for the man responsible. Andrew; Ferry McFerryface, Constance.
Now wanting to move on & boondoggle the people of Gilmore if they are foolish enough to vote him in. https://t.co/HG2EA13gAT

Don’t be fooled by these Hi-viz frauds. It’s your job to vote out this pair of bogus tradies knocking on doors, quoting for votes. They won’t get the job done and they have no intention of bringing integrity back into Parliament. So, “Out damned Scott!” Constance, too.

Unsurprising news: when questioned about his record in the Parliament of NSW, Constance indicated he doesn’t want a cabinet position thereby suggesting he just wants a comfy seat on the backbench. A share of the pork without a share of the responsibility.

Another retail politician wants the government out of his life but wants our vote to keep him on the public teat.

Geoff Dyer is a retired teacher with 41 years of experience in the classroom. Subjects taught include English, Modern and Ancient History, Society and Culture, and Aboriginal Studies.