Having waded into politics so deep he is being haunted by the ghosts of those he undermined and backgrounded on in the past, he has fallen back on his trusted tactic of denial. However, before he signs his statutory declaration to say he didn’t do what he likely did, he should consider the fact that accusations against him are not malicious, bitter slurs or in any way offensive if they are true.

Now Morrison says the only reason he would be required to sign a statutory declaration is if a court ordered him to do so.

Clearly, neither the Prime Minister nor his cronies agree with depictions of him as a liar, bully, backgrounder, hypocrite, racist and fraud. In fact, he’s dismissed such characterisations of himself as a bit of sledging.

Let’s look instead at the other Coalition front runners and what they have to offer for a better Australia. How do these 'sinister ministers" stack up? 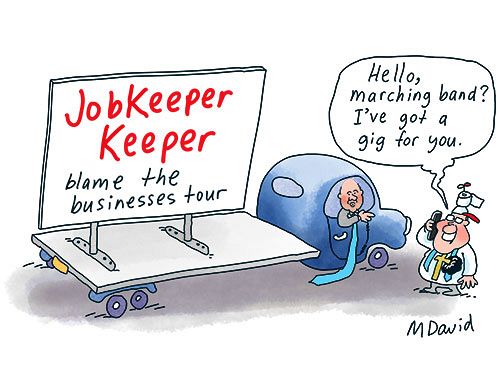 Scotty from Marketing: What a way to run a country

Word is, Prime Minister Scott Morrison intensely dislikes the moniker "Scotty from Marketing" bestowed upon him last year by the Betoota Advocate.

This barely coherent roustabout and parliamentary clown is a “retail” politician who sold his brains along with his soul early in his career.

He pretends to be the farmers’ friend but his career highlight was when he got to hold Scott Morrison’s lump of coal in Parliament. Joyce and his Party received billions of dollars in a "payoff" from the PM for agreeing that climate change is real. He hopes to use the money to attract votes by building lots of dams without due diligence or a plan.

If he survives the election he should watch DamNation, a 2014 documentary that supports an emerging environmental strategy of dam removal as a way to restore river ecosystems.

McKenzie is the not-so-honourable Minister for Emergency Management and National Recovery and Resilience. She is famous for her use of coloured pencils in the sports rorts that had Government ministers lined up behind her to defend their favourite clubs and wondering where the fiction that funds are allocated fairly came from.

Only a year earlier, they gave $1 million in drought funding to the Moyne Shire Council even though they weren’t enduring drought. McKenzie is now in possession of, and sitting on, the Government’s $4.8 billion disaster kitty and a new packet of coloured pencils. In future, you may need to flash your Liberal Party card to get in a lifeboat.

The Treasurer lies about Labor introducing death duties and taxes, and offers pennies to the poor while barrowing billions out the back door to his capitalist friends. He hates advisors messing with his mate’s profits by helping super funds make socially responsible investments. Supporting Frydenberg is a Murdoch media favourite; they are calling him the “pocket rocket” as he empties the treasury in a pathetic attempt to buy votes.

Frighteningly he is in “pole position” to replace a stumbling Scotty.

The Minister for Defence and War. It’s tempting to “wax Shakespearean” and say he has “a lean and hungry look”,  but his resemblance to both the common spud and the infamous Harry Potter villain Voldemort means that, despite having done his fair share of stalking, he’s not really a contender for the top job. He is more a collaborator than a team player.

Surrounded by the off-putting stench of dodgy contracts and backroom deals he’s definitely the most sinister of the ministers. His career highlights include joking about rising sea levels at the Pacific Island forum and costing the taxpayer $5 billion for cancelling the French Submarine project. This, "he said, she said" Minister is desperate to shirtfront Chinese President Xi Jinping and start World War III. 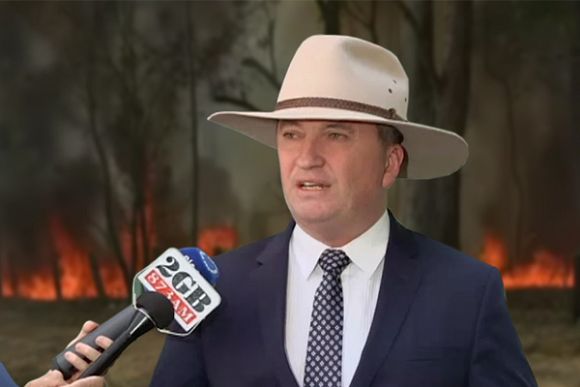 Liar, liar, the bush is on fire

Has lying become the new normal for our elected officials? Dr Martin Hirst argues that events of this week prove it has.

The Minister for Industry, Energy and Emissions Concealment. This high ranked climate denier attended COP26 aiming to stop or delay international action to control climate change. Taylor loves his coal and is a gaseous piece of work with leadership aspirations.

The Minister was central to Australia winning the "fossil of the day" awards at the climate conference, COP 26, in Glasgow and becoming known as “the rich world’s weakest link".

A decision by him to open up the market for carbon credits has made it cheaper for companies to pollute. As a result, $3.5 billion gets transferred from the taxpayer directly to the private sector (where undoubtedly his next job is waiting).

Minister for the Neglect of Senior Australians and Aged Care Services, and Minister for Sport. Minister Colbeck was careful to attend to a cricket crisis while COVID ripped its way through residential aged care. He has no plan for improving aged care services and avoids committee meetings that try and develop a plan.

He appears unphased by 711 residents dying in COVID outbreaks by March 2022, compared with 282 deaths in all of 2021, and 685 in 2020. He insists there is no crisis in the aged care sector, so he focuses on local and community sport hoping to build on Minister McKenzie’s success in this area.

The Attorney-General and Minister for Industrial Relations. A laughable choice for this position. Infamously entangled in a police raid on a union, aimed at digging up dirt on former Labor Leader Bill Shorten, another minister short on integrity.

Her career highlight was her famous utes, utes, utes speech, telling apprentices that Labor were banning utes and she would defend them when Bill Shorten came to take their cars away. Her attack on electric cars was described as an absurd, shameless fear campaign.

When paying at the pump now, many of those same apprentices are dreaming of an electric ute.

Minister Cash has been tasked with handing out lucrative jobs packages ($500,000 a pop on the public purse) to Coalition minions on the way out the door. She’s hoping this will help maintain a biased system after they are ejected from the Government benches.

These are just a few of the dozens of albatrosses hanging around the honest PM's neck. Why these characters got their jobs in the first place is puzzling. Perhaps it just seemed to be a clever idea at the time.

There are many Coalition pollies jostling for positions of power, unfortunately, all the quality is on the Opposition benches. Some of the Coalition gang have already been thrown overboard and others are jumping before some form of ICAC starts checking the books.

Australia is still waiting for Morrison's statutory declaration. He’s happy to lie in Parliament, and to the media, but when a legal document with a potential five-year jail sentence for lying is put in front of him, he appears to have second thoughts.

Happy voting in May. Let’s hope their like will never be seen again.

Geoff Dyer is a retired teacher with 41 years of experience in the classroom. Subjects taught include English, Modern and Ancient History, Society and Culture, Aboriginal Studies.