Lachlan Barker investigates reports on whether Adani is proceeding with its plans for a mega-coal-mine in Queensland.

RECENTLY, there has been a bit of heat around Adani and their plan to build a mega-mine in central Queensland. So, when the stories came out I scanned them with interest, but could find no confirmable fact indicating that anything had changed.

It seems only political and public relations rhetoric, and this coalesced around the rather bizarre claim that Adani would be starting their mine in late 2017.

However, this was almost immediately contradicted by, of all people, new Queensland Resources Council head Ian Macfarlane, who reportedly opined that:

".. it appeared the project could be stuck in the courts for another two years because of the queue of three other cases where a decision is pending."

Macfarlane is right here — there is no way that Adani are going to start this mine until all the court cases are settled. It is just too risky and also makes getting finance impossible while court decisions are pending.

7 reasons why splashing $1B taxpayer subsidy on #adani coal billionaire is a terrible idea https://t.co/0H7zoYoJx6

So that’s one point and next is the overarching and still-the-same-as-before-issue — that of finance for Adani, which hasn’t changed. The mine is still being called unbankable and rightly so.

It was probably best put by Tim Buckley of the Institute for Energy Economics and Financial Analysis (IEEFA) here, when he pointed out that Adani Enterprise’s net debt at the end of September was US$2.4 billion. So raising the money to start an A$10 billion (US$7.5 billion) mine, rail and port project in Queensland is clearly not something that is going to happen.

Following on from Tim Buckley’s point, I did some checking of my own and discovered that as bad as the above financial situation is for Adani, it’s about to get a whole lot worse.

This is to do with the current rise in world coal prices, IndexMundi reports Australian premium thermal coal is up near 90 per cent, to US$99, from a recent low point of US$53/t.

In the most recently reported quarter, Adani Power spent approximately US$345 million on imported coal. With the coal price rise, represented by the Harga Batubara Acuan (HBA) price for Indonesian coal, I estimate they are going to spend half a billion U.S. dollars on imported fuel in the next reported quarter. 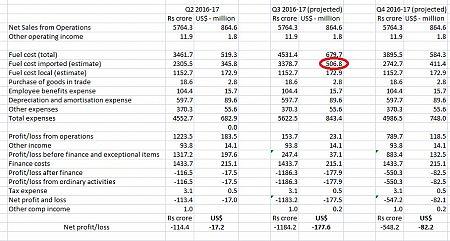 Their loss for the quarter reported was US$17 million. Plugging the new figure into the reported values and assuming for the purposes of the argument everything else stays the same, their loss for the upcoming quarter will likely be US$178 million. With the Indian Rupee depreciating from Rs66 to Rs68/USD in the last two months, this will only compound the losses, given the currency mismatch against Rupee denominated electricity tariffs and Adani’s lack of currency hedging.

Following the coal futures, the loss for the quarter after that would be around US$82 million, before the coal price returns to close to current resting levels mid-2017 and Adani’s quarterly losses return to “normality” at around US$20 million. HBA Indonesian coal prices used for the forward projections are US$85.1 (actual) for Q3 and US$69 (projected) for Q4. 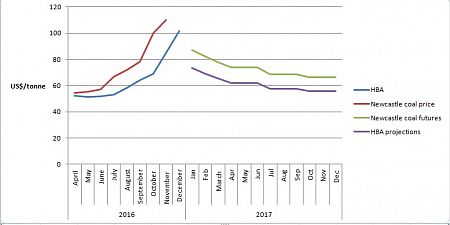 But, please note closely here, the Newcastle coal futures projections, which the HBA projections are based on, are very conservative. If the red and blue lines representing the actual Newcastle coal and HBA prices just level off where they are over the next quarter, at US$110 and US$100 respectively, then Adani Power’s losses for Q4 will be US$267 million, taking their total losses for the remainder of the financial year to US$444 million — close to half a billion down in just half a year.

This is clearly a problem, as they are struggling already. In the past six quarters – since Udupi power station was added to their stable of four coal fired power stations – Adani Power has reported a loss in four. 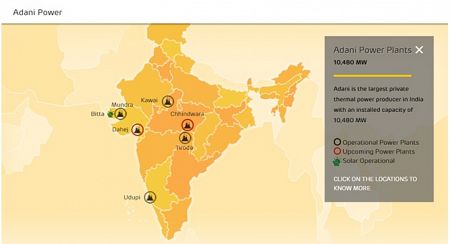 The only two quarters that showed a profit were quarters when the government allowed them a compensatory tariff.

(And I might add, some of the quarters that showed a loss had the compensatory tariff added anyway, the most recent quarter for example. NB one crore equals 10,000,000 rupees, with current exchange rate of 0.015 INR-USD)

This compensatory tariff is essentially when the power generators ask to be allowed to raise their prices because the price of generator fuel, in this case imported coal, goes up.

This compensatory tariff is back in court again, with the Appellate Tribunal for Electricity (APTEL) about to hand down their decision.

However Adani Power is damned in every direction on this one. If APTEL allows them a serious enough compensatory tariff to regularly show a profit then the mid-range distribution companies – Discoms as they are known – will not be able to afford to buy as much power, so Adani will have lower gross sales.

If APTEL says no to the compensatory tariff then Adani Power will be selling power at a greatly reduced profit, if not break even or a loss (and potentially have to reverse its decision to book as revenue a yet to be legally approved tariff increase).

This was all put well By Megha Manchanda in the Business Standard here:

‘Rise in coal prices has led to an increase in the variable cost of power producers. This, in turn, would be recovered from the end-consumer in the form of higher tariff. But, there is a flipside to it – expensive power has fewer takers.’

In the general, this expensive imported coal issue will not be lost on the Indian government of Narendra Modi, and will increase the general and much stated desire to end all coal imports.

So at the end of the day, we can say that Adani’s bizarre claim they will be starting the Carmichael mine in September 2017 is fanciful.

Galilee basin coal is similar to Indian indigenous coal is calorific value and ash content, so if Adani want crappy coal with ash in it, they can get as much as they like, as cheap or cheaper, in India. (Here is a quick comparator):

And on the financial front, they haven’t got the finance now and by June 2017, going on my estimates, Adani Power will have racked up a quarter, if not close to half a billion U.S. dollars in losses.

If they can’t get the finance now, they sure as hell won’t be able to get it then.

The ultimate hypocrisy. @Barnaby_Joyce saying that we have to "turn the budget around" while giving #Adani a billion dollars #abc730 #auspol

You can't build and operate the world's biggest coal mine and expect we can slow down global warming
https://t.co/hBgBjJVdiV #auspol #Adani

Keep an eye on the COAL-ition! Subscribe to IA for just $5.