David Horton was at the Canberra March in March protest yesterday, which he says was social media made flesh and blood — and passion.

I WENT to the Canberra March in March protest yesterday, so I need to write about it.

Everyone else has written about their own experiences among the 100,000 plus people who marched in cities and towns all over Australia in last three days, so I should too. 100,000 people, by the way, virtually ignored by the media (except to complain about one or two signs, out of thousands, with a rude word or two, in order to discredit the event), but whose actions, just six months into the term of a new government, are unprecedented.

The Canberra event was much like the other events everywhere.

It all had a pleasantly amateurish feel — no professional protesters or rent-a-crowd here. Ordinary people with no second names (“I’m Jim” “I’m Lisa” and so on) standing in front of an “open mic”, most clearly for the first time, saying in a few stumbling and, in one case, tearful, words, why they had made the effort to come. Young and old, radical-looking and very conservative, men and women (about equal numbers), straight and gay, Aboriginal and “Indigenous” (as one Aboriginal speaker put it), local Canberra and “from Goulburn” ,“from Newcastle”, “from overseas”, healthy and not-so-healthy.

The March set off – symbolically, by accident, I suppose – from the back of the Parliament House of the old Australia, so many of the protesters were obviously missing, to the front of the new Parliament House, where politicians – except Adam Bandt later – were conspicuously missing. These weren’t a few protesters bussed in and paid by shock jocks and holding nasty signs, so there was no sign of Abbott.

The organiser set off, half tripping over the amplifier he was trundling along for the microphone, and tried to get a proper demo feel going with a couple of made-up slogans which at least some of the crowd, feeling that this is what one was meant to do at protests, tried to chant.

As everyone has noted, this wasn’t a protest about nothing, but a protest about everything. There was signage and tee shirts covering every political event of the last 6 months. These were people who would normally attend single issue protests (refugees, environment, education) but who had come together on a pleasant Canberra Autumn day to protest about multiple issues.

And that is odd.

These were certainly politically aware, probably well educated, reasonably intelligent and well-informed people. The sort of people who knew Keating’s aphorism “change the government, change the country” and would fight however they could during an election campaign not to have a change to a Liberal government, but, if losing, would shrug and start getting ready for the next one. They were people (at least the older ones) who had been annoyed by John Howard’s “core and non-core” promises, but had accepted it as hard-nosed politics.

So what the hell was the difference this time?

This is a government that actively and extensively lied before the election. To a far greater extent than ever before, this was an election victory based on a totally misled electorate. Not just lied but concealed its real intentions. Apart from the removal of the “carbon tax”, itself a lie, virtually every other action of the government in the last 6 months was unannounced or hidden in very fine print during the election.

What’s more, the surprise actions are not just random quirks – a payback here, a special interest there, a shock jock’s special project another day – in the way Howard tended to operate, an expedient day at a time. Nor is this another Whitlam-Barnard “making up for 23 lost years by hurrying to implement the policies the public just voted for” period.

No, this has been a concerted, ideology-driven (by both the Party and its shadowy right wing think tank urgers) attack on every aspect of Australian society, culture and environment. I have written about the warning signs before the election, and some of the actions since, but the scale of this political blitzkrieg has even left me shocked and awed. This is a government viciously determined to not only wipe out every trace of its predecessor, in a manner quite unprecedented in this country, but to remake (Khmer Rouge style) the country in the image of Freddy Hayek and Milton Friedman, Maggie Thatcher and B.A. Santamaria.

Not just policies and legislation being used to effect change. Every advisory body of any kind is either being closed down or packed with Liberals. Multiple inquiries have been set running, each with a predetermined outcome written by a reliable inquirer. Parliamentary institutions like Question Time and Senate Committees have been nobbled and blocked. Any group receiving government funding is being silenced. Secret trade agreements blocking our own laws are being signed. Protests are being legislated against. School curriculum is being re-written by right wing reviewers, a think tank fellow is put in charge of a Human Rights Commission. The ABC is threatened, and will clearly be privatised along with any other agencies still in government hands. The NBN is wrecked to suit the interests of Murdoch, while at the same time reducing the effectiveness of the people’s communication tool in social media. Unions are being crushed. Corporate taxes being slashed ready for drowning government in bathtub. Billionaires are determining economic policy. Science is being destroyed and religion promoted.

Phew, glad I got that off my chest (there is more, much more, but that will do).

Point is, I am sure any of the couple of thousand people at this protest could sound off in a very similar fashion, with additions and different emphases. But we were all there because of this terrible certainty that Australia is being shattered before our eyes and turned into an ersatz America. And no one signed up for that in the polling booths of 7 September.

Finally we were all there for another important reason.

Has anyone got a link to the more offensive signs at the #marchinmarch events?

The media have long proclaimed themselves the Fourth Estate, speaking truth to power, guardians of the people, fighters for Justice, finders of facts. But in 2010-2013, they were instead active political players throwing their battalions into destabilising the Labor government and protecting the Opposition from scrutiny. And since the election they have continued on exactly the same agenda.

No-one would be aware of what was going on, my diatribe above, who used only mainstream media for information. Only social media is acting as watchdog as the Panzer brigades and Stuka squadrons roll on across the Australian political landscape.

People were on those green lawns yesterday in order to try to compensate in a small way for the lack of media scrutiny on this government — and the lack of media reporting (consisting mainly of attempts to denigrate the protesters) confirmed that reason dramatically.

March in March was, in a very real way, social media made flesh and blood. And passion.

You can read more by David Horton on The Watermelon Blog or follow him on Twitter @watermelon_man. 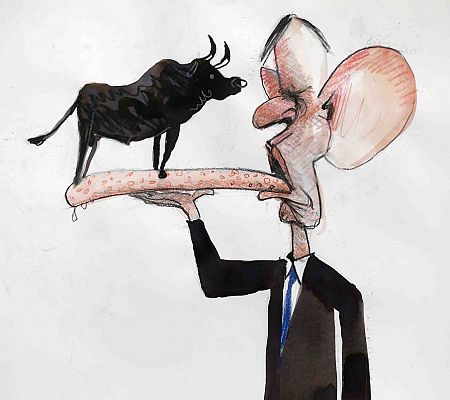