It is not illegal to seek asylum in Australia. Marilyn Shepherd explains how this lie and the demonisation of people smugglers became folklore in Australia. 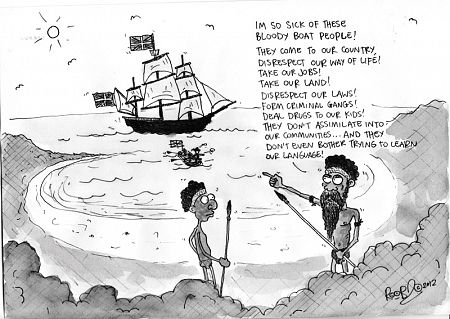 When the UN Refugee Convention was written in 1951, the understanding and letter of it was that signatory nations assess the claims of anyone who applied in their territory. Articles 31, 32 and 33 were written and ratified to ensure that would be the case, yet it is those three articles that have become the most bastardised by our “leaders” over the last 25 years — since that day a few hundred Cambodians arrived by sea, in spite of Prime Minister Bob Hawke believing he had brokered peace within Cambodia.

Article 31 is very clear ― no state shall apply any penalties to asylum seekers if they are “illegally” in their territory provided they present to the authorities and state their reasons for being there.

In 1992, though, Australia decided that this only meant fines or being taken to court and charged with the “crime” of illegal entry.  Instead they instituted a system of imprisonment without charge for the purpose of “administration” of claims, enshrined the Refugee Convention into the Migration Act and made it a crime to escape that detention.  Perhaps the best description of this insanity can be found in Peter Mares book Borderline, first released in late 2001.

People started to go mad, they started to stitch their lips and they started to burn the prisons to the ground. And also, over the last 20 years, there have been dozens of reports showing that imprisonment in this manner is indeed punishment for “illegal' arrival ― even though the arrival is a right enshrined  in the migration act almost 20 years ago now.

Article 32 forbids expulsion from host territories for any reason other than war, yet in the case of the TAMPA, PM Howard did it to win the votes of the more racist “Hansonists” and to maintain a lie. As shown by Peter Van Onselen and Wayne Etherington in their biography of John Howard, it was Jackie Kelly, before the 2001 election, that confronted Howard and told him something had to be done because the holders of marginal seats were being killed by racists.

So, with such clear rules, legally binding on all signatory states – and even non-signatory states, to some extent – how did Australia come to have so little leadership on the three most important and non-derogable articles of the Refugee Convention?

1  Offshore resettlement ― which is for those few refugees we accept on a voluntary basis, provided that we are the country of last resort, that they suit us and that they can work and fit in.  It's a well funded, expensive program but it is not obligatory on us and it has no legal treaty cover or basis.

2  Special Humanitarian visas ― for the family members sponsored by those refugees who are already here, families must pay all their expenses but, again, this is voluntary.

3  Onshore applications for protection visas under the Refugee Convention ― this is the only program that is legally binding and legislated by the parliament, yet not one media outlet, not one politician other than Judi Moylan, in a speech last year, has pointed it out to the public.

So, lie number one festers into a vile sore, as we continue to jail innocent people who have the right to come and claim asylum here, as stated in the Al Masri case by Justice Ron Merkel.

62 The Refugees Convention implicitly requires that, generally, the signatory countries process applications for refugee status of on-shore applicants irrespective of the legality of their arrival, or continued presence, in that country: see Art 31. That right is not only conferred upon them under international law but is also recognised by the Act (see s 36) and the Migration Regulations 1994 (Cth) which do not require lawful arrival or presence as a criterion for a protection visa. If the position were otherwise many of the protection obligations undertaken by signatories to the Refugees Convention, including Australia, would be undermined and ultimately rendered nugatory.

63 Notwithstanding that the applicant is an "unlawful non-citizen" under the Act who entered Australia unlawfully and has had his application for a protection visa refused, in making that application he was exercising a "right" conferred upon him under Australian law.”

This has been upheld by the high court in the Al Kateb case when the full bench stated:

As Gummow J indicated in Al-Kateb at [86] ff, the current Migration Act, unlike its precursors, does not make it an offence for an unlawful non-citizen to enter or to be within Australia in contravention of, or in evasion of, the Act.

31 Further, as Hayne J observed in Al-Kateb at [207]-[208] the description of a person’s immigration status as "unlawful" serves as no more than a reference to a non-citizen not having a "valid permission to enter and remain in Australia". The use of the term "unlawful" does not as such refer to a breach of a law.”

Imagine how different the 'debate” would be in this country if one politician simply stated this truth and showed the leadership to believe in it.

Then we come to Lie Number 2, considered by Malcolm Fraser and rejected way back in 1976 when the first Vietnamese arrived ― “people smuggling”.  We claim that providing transport for refugees is “people smuggling”, even though the law of this country states that it is a legal right to arrive without papers of any kind and ask for help.

How can something that is legal for the refugees possibly be illegal for those who give them nothing more than one way transport?

In 1999, Ruddock introduced penalties for giving refugees transport to this country and, in response, the UN wrote and put in place two protocols against the trafficking of humans and the smuggling of migrants.

The first is concerned with the trafficking of (mainly) women and children for sexual slavery; the second is for the forced movement of migrants across borders to exploit them on an ongoing basis.

Australia has never jailed a single person for people smuggling.

We jail Indonesian crew members not for people smuggling ― we jail them because they force us to assess the refugee claims of those they bring here, as can be seen in this list of cases:

As has been observed in relation to other cases of this kind, the prisoners were not involved in a 'people-smuggling' exercise. There was nothing covert about either operation.

They were transporting the non-citizens to Australia for presentation to Australian authorities. There was no attempt to hide from the authorities or to disguise what they had done.

It is only now that the courts are realising it is a lie to call it people smuggling and the real insult is in the language of the protocol itself:

Imagine if the leaders today simply told the truth, instead of demonising everyone as being the vilest of the vile?

We are told the refugees are cashed up queue jumpers, illegals, not worthy of anything but to be pushed away to some other country and the Indonesian crews are even lesser human beings.

Imagine if our leaders told the simple truth that, without “smugglers”, no genuine refugee could ever escape their persecutors?

Would so many still blame the refugees if the truth was told openly by the “leaders” we have today, or are they all so tainted we would not believe them?

Or is it simply that the two ignorant lies have taken hold and no amount of truth will ever dispel them?

Australia has never been a leader on refugees, even though we helped to write the Convention ― we just like to pretend we are.

(This article was originally published in On Line Opinion on 21 October 2011, in a slightly different form.)

This work is licensed under a Creative Commons Attribution-NonCommercial-NoDerivs 3.0 Australia Licese