It may be entertaining to watch the pratfalls of oafish prime minister Tony Abbott — but excruciatingly for Australians, his endless blunders are also covered extensively by the international press. French correspondent Alan Austin reports.

FOR THE world’s media which feed off the pratfalls and humiliations of the notorious, Australia and Tony Abbott have been the gift that keeps on giving. Unfortunately, the prime ministerial blunders are covered extensively by the prestigious press as well.

Those include virtually all Australia’s trade and security partners.

The most damning reports have been in Australia’s immediate neighbourhood. The New Zealand Herald, which was quite forgiving of Abbott’s earlier blunder with the knighthood to Prince Philip, was scathing.

‘Such a policy combines moral bankruptcy and counter-productiveness in equal and forlorn measure. Yet Mr Abbott's refusal to deny the claims made by an Indonesian police chief, and others, indicates it is indeed happening.’

The secrecy seemed to trouble the Kiwi conscience:

‘Australians are none the wiser, however. Their Prime Minister is evading questions by insisting this is an "operational matter". That is little wonder given such an abject abandonment of good government.’

‘Someone doing bribery is wrong ... Bribery is not right ethically in relations between countries.’

"At the very least [NZ prime minister] John Key should be urgently seeking an assurance from Tony Abbott that they have not mandated or sanctioned payments of thousands of dollars to criminal people smugglers. That would be an outrage if they have." 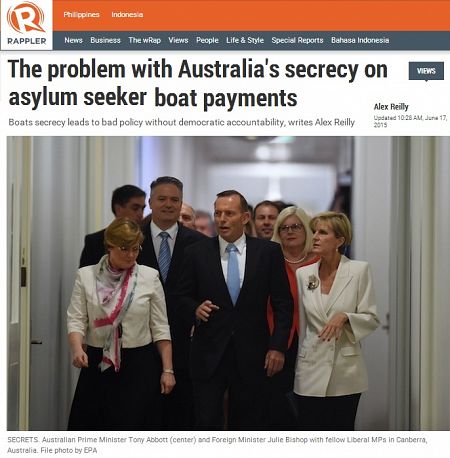 Rappler in the Philippines said:

‘The secrecy around whether the Australian government has or has not paid people smugglers highlights a deeper problem with the way it is handling asylum-seeker policy. The withholding of information about government actions in pursuit of achieving its policy ends undermines its democratic accountability to the Australian people.’

‘The escalating row risks further damaging relations between Australia and its northern neighbour.’

Earlier Australian Foreign Minister Julie Bishop suggested that Indonesia was to blame for failing to properly manage its borders, prompting an angry response from her Indonesian counterpart Retno Marsudi.

Marsudi, who had demanded answers from Australia's ambassador about the issue at the weekend, accused Canberra of “diverting the issue”, adding: “It isn't difficult for Australia to respond to my question”.

The Jawa Pos reported splits in the Abbott cabinet, with some ministers denying the bribes and others remaining silent. It also claimed the actions fractured relations – retak hubungan – with Indonesia.

#MP Australian Leader Is Pressed on Whether Migrant Smugglers Were Paid to Turn ... via New York Times http://t.co/yj9fQ4k6hP

‘We see no circumstances under which paying people smugglers can be in the interest of vulnerable migrants. This is all the more so in light of well-documented gross violations of the human rights of migrants by unscrupulous smugglers in recent weeks and months.’

"We must take action against the smugglers and trafficking, not pay their way."

"Stopping the boats is the only real success story for the government to hang its hat on. I am speculating, but Mr Abbott will be thinking that eventually [stopping the boats] will get tougher and he is not willing to remove anything from his bag of tricks."

As they are reading in Tahiti, ‘vraiment regrettable’.

Get the real stories, subscribe to IA for just $5.