Abbott’s problems are all Rudd’s and Gillard’s fault

Alan Austin investigates why Abbott's humiliation is such a huge story with the international media.

WHY IS the leader of a relatively small country deciding in good faith to honour a long-serving elderly official such a monumental story around the globe?

It was news in France, Spain, Russia, Denmark, Switzerland, Lithuania, Pakistan, the U.S.A., Germany, Ireland, Holland, Japan, Indonesia, Singapore, Thailand and Tahiti. In China, several hundred outlets across the nation covered it on television and in print.

Many played the story straight. Some were even sympathetic to the unappreciated Aussie battler PM. But most seemed to relish his verlegenheit, or смущение, or malu, or 困窘, or kejengahan, or varžymasis, or embarrassment.

Greece was delighted, of course. Neos Kosmos led with

“Greek” the new Knight of Australia

Making sense of this global fascination with an incident, which only impacts one person negatively – Abbott himself – may be helped by a retrospective of big international stories from Australia.

All around the world they are wondering who this buffoon is that is Australia's Prime Minister http://t.co/M20Re9HeK2

After a sleepy period through the 1950s and 60s, the Whitlam years provided significant world news. Stories included the first visit by a Western leader to China and major shifts in relations with both Britain and the U.S.A. Gone were imperial honours, ‘God Save the Queen’ and automatic engagement in U.S. invasions.

The Fraser years provided fewer fireworks – after, that is, the drama of the Coalition “coup” subsided.

Coverage through the Hawke and Keating years included economic initiatives such as floating the dollar, cutting tariffs and the wages accord. Plus the personalities of the two men themselves.

After that, however, it was all downhill. Journalists abroad were appalled as John Howard slashed overseas aid, became George W. Bush’s deputy sheriff in the Pacific, refused to sign Kyoto, declined to apologise to the stolen generations, paid bribes to Saddam Hussein in the Iraq oil for wheat scandal, backed the illegal U.S. invasion of Iraq and upset relations with neighbours the Solomon Islands, Indonesia, Malaysia, Fiji and P.N.G.

The world was amazed at the next Government: that new leader Kevin Rudd was a Canberra outsider, that the Kyoto accord was signed immediately, the formal apology delivered on the second day of the new Parliament, and so on.

An early report in Zeit in Germany was headlined ‘Vorbild Down Under’ – Model Down Under. It noted Rudd’s two first official acts: signing the Kyoto Protocol and the formal apology. It observed that the latter was ‘beispielhafte politik der versöhnung’ – an exemplary policy of reconciliation.

The article suggested that:

‘even the German Social Democrats could look closely at the history and success of this Rudd model’. 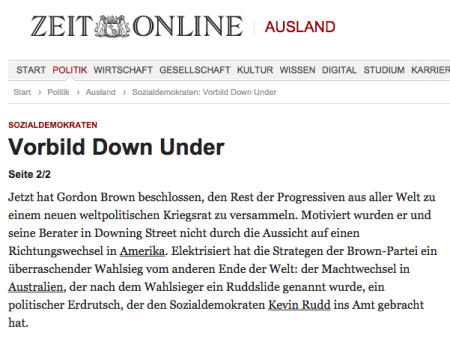 Then Rudd telling China to fix their human rights – in language they understood – was reported globally, including across China. The headline of this piece translates as ‘Rudd urges the Communist Party of China to revisit human rights during the Olympic Games’.

The Rudd and Gillard period saw repairs to all relations with the region shattered during the Howard years. Australia was given a seat on the United Nations Security Council, asked to chair the Pacific Island Forum and voted to chair the G20 group of the world’s 20 major economies.

Gillard addressed the joint meeting of the U.S. Congress in 2011 and received a record six standing ovations and ten seated rounds of applause. All widely covered.

And just in case all that wasn't enough, they generated the best economy the world has seen — during the worst global downturn since the 1930s. Treasurer Wayne Swan getting the best treasurer award was noted. 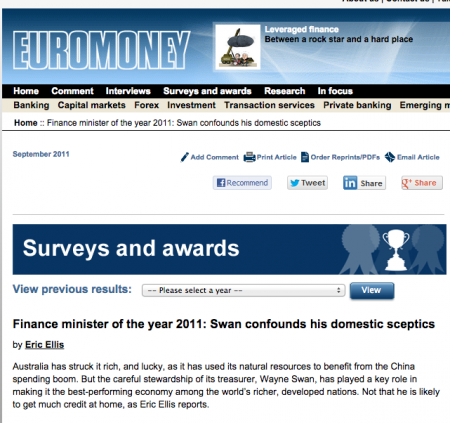 Wayne Swan wins 'Finance Minister of the Year Award' for the best-performing economy.

Then came a searing moment which made not only Julia Gillard the darling of the world’s media, but inaugurated the international reputation of Tony Abbott. That was the famous misogyny speech, covered prominently in almost every major newspaper, from the U.S.A., the U.K. and Finland to Slovenia, Portugal and Japan.

It was not good coverage for Abbott. Christopher Hume of the Canada’s Toronto Star recently described Abbott as the leader who:

'... outside Australia will always be the man who was sliced and diced into little pieces in the famous ‘misogyny speech’ by his predecessor Julia Gillard delivered in 2012. After being reamed out so definitively, it’s a wonder he can still show his face in public.'

The theme running through this short potted history appears to be this: that the world’s media will applaud Australian moves towards being a good global citizen, having an independent voice, ending imperialism – ancient or modern – supporting global initiatives to advance women, protect the planet, end racism and defend the disadvantaged.

Retroactive decisions will be noted with disappointment, sometimes dismay and, where necessary, ridicule.

Hence the highly negative media coverage of much of Abbott’s brief prime ministership so far. His election win was greeted with incredulity by many publications.  Rue 89 in France headed its piece: 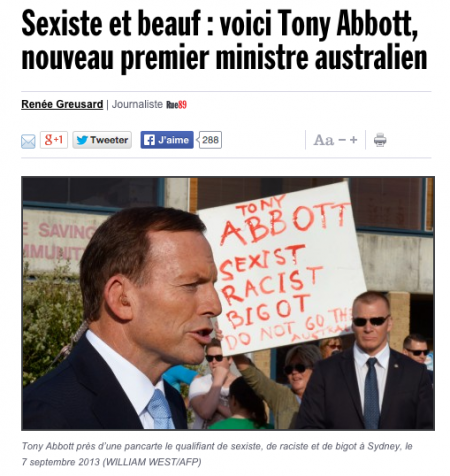 It has gotten worse since then. Abbott’s destruction of relations with Indonesia, his activism against action on climate change, cutting foreign aid to the region, his embarrassing trip to Davos in January last year, his ineptitude in France on D-Day last June, his continual sexism offences and his failure to pass the budget have all been reported globally with dismay.

And now his obeisance to the oldest of the old guard of the British royals.

Perhaps Abbott’s humiliation in the world’s media might not have been so mortifying had his two predecessors been somewhat less impressive in their eyes.

But to look on the bright side, perhaps he will not be in the spotlight for much longer. 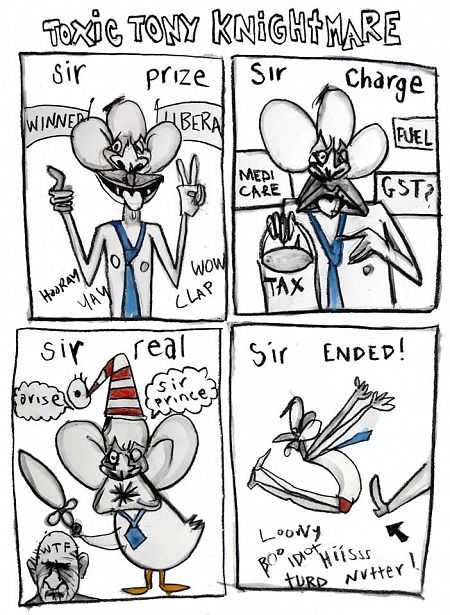