AUSTRALIA'S ECONOMY has been managed just as poorly through the current pandemic as through the global economic boom which ended abruptly in February. The contrast with the last major international crisis could hardly be starker.

During the Global Financial Crisis (GFC) which began in 2008, Australia’s economic performance was widely hailed as the world’s best. Accolades from all quarters affirmed the Rudd Government’s decisions were the right ones, taken more swiftly than responses implemented elsewhere.

Research staff at the International Monetary Fund (IMF) observed in 2009, uniquely of Australia:

'The authorities' timely and significant macro-policy response cushioned the domestic impact of the global financial crisis. Staff commended the quick implementation of fiscal stimulus and noted that the shift into deficit was justified ...'

The Federal Government has won glowing support for its controversial economic stimulus, with the Western world's leading think tank saying the strategy will save up to 200,000 jobs. The Organisation for Economic Co-operation and Development's (OECD) annual employment outlook says Australia will be one of the Western countries to suffer least in the global financial crisis.

This cannot be said of the response of the Morrison Coalition Government to the current global crisis.

Kennedy of treasury at senate estimates " Australia is already a long way into a recession ,Unemployment will continue to rise from 17% , There will be no V shaped recovery. We were heading to recession before #covid19 @ScottMorrisonMP

Half a million jobs lost

The number of Australians now looking for work climbed to 823,300 in July, the highest since September 1994, when Paul Keating was busy restructuring Australia’s economy and ending high jobless numbers forever — as was expected at the time.

Australians underemployed – needing a job or needing more hours – now number more than 1,816,000. That’s the highest ever by far and more than double the number in September 2013 when this Coalition Government gained office, promising "jobs and growth".

The jobless rate, according to last Thursday’s detailed labour force update from the Bureau of Statistics, is 6.22%. Underemployment is 13.71%, the highest ever.

Wait — it gets worse

Jobless numbers and rates do not tell the full story as workers with just one hour per month are counted as employed. The best indicator is the total hours worked per person per month. This takes into account full-time jobs, part-time jobs and population shifts into and out of the workforce.

During the last global economic recession, this fell slightly in Australia to a low of 85.8 hours per month in August 2009. It soon recovered under the stimulus program and reached a post-GFC high of 88.2 hours in January 2011.

That remains the high point in recent history. The Coalition has not matched that yet — despite its promises of more jobs and enjoying the greatest global economic boom since World War II.

Hours worked per person fell below 85 in Tony Abbott’s first year as Prime Minister, then below 84 in his second year, before recovering to Labor-era levels in 2018. The latest number, however, is a disastrous 78 — the lowest since records began in 1978, when Malcolm Fraser was Prime Minister.

Impact of the coronavirus on jobs worldwide

These depressing outcomes in Australia were not inevitable. This can be shown by tracking jobless rates in other developed countries impacted by the pandemic.

The virus has impacted all populations, but its effect on jobs and other economic variables has varied greatly. Clearly employment in tourism, hospitality and entertainment has collapsed everywhere. But there have been simultaneous increases in jobs in food production and distribution, health care, medical research and, in several countries including Australia, in retail sales. And not just toilet paper, it seems.

Both Italy and France copped the earliest onslaught of the pandemic and have lost 541 lives per million and 434 per million, respectively. But jobless rates in both countries have improved in the first quarter of this year over last year. Other countries enjoying buoyant employment despite the pandemic are Poland, Israel, Japan, Mexico, Iceland, Belgium and South Korea.

At the other end of the spectrum, Australia has lost more than a full percentage point of the workforce over the last year, despite experiencing only four deaths per million to the pandemic.

Other losers are Canada, Chile and Austria, with the USA copping the worst outcome in the entire world with its jobless rate soaring to 14.7%. 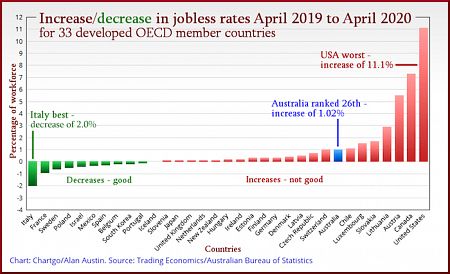 The red and silver chart, above, shows the annual change in jobless rates for all OECD members which have reported jobless outcomes to March or April. Those to the left of the chart in green have done well. Those in the middle have fared reasonably. Those to the right, which include Australia, have managed matters poorly. (Note: some numbers for March may not reflect the full impact of the pandemic on jobs. So, we shall revisit this later when June quarter figures are available.)

Among the 36 OECD countries, Australia’s jobless rate, now 6.22%, has fallen from ranking eighth in 2013 – behind Switzerland, South Korea, Norway, Japan, Mexico, Germany and Iceland – down to 19th today.

On the full global table, Australia ranks 90th, the lowest since the dismal Howard years. That is well behind Sierra Leone, Bangladesh and Zimbabwe. Australia has more than double the jobless rates of East Timor, Uganda and Papua New Guinea.

Can do much better

There is no excuse for this. The global economy was extraordinarily strong before the coronavirus hit. It remains strong in most regions despite the pandemic.

Australia’s exports in March were the third-highest ever. This March exceeded last March by nearly 8% and the same month in 2018 by a thumping 21%. These are still boom times for the multi-national exporters and for Australia’s foreign customers who cannot believe their luck.

But failures in fiscal policy – notably collecting taxes or royalties from the big corporations – ensure the majority of Australians continue to miss out.

Today the #IMF said they expect Australia’s economic downturn to be worse than in the US, UK and elsewhere and for unemployment to keep rising into 2021. Frydenberg shouldn’t exclude millions of workers from JobKeeper, which would prevent them joining the jobless queues #auspol pic.twitter.com/7o2mDpADxG

Australia’s unemployment ranking statistics now worst ever.
We are now ranked 21st in the OECD.
Is our govt deceiving us about a "strong" #economy?#auspol https://t.co/zxlU7P2BHw @IndependentAus