This year, in advance of this day, pre-empting the usual bitter debate over the January 26 date, the Federal Government launched another advertising campaign. Its aim, it would appear, was to promote the date as inclusive and featured many smiling, well-pigmented faces.

Then on Monday this week, in a blaze of publicity, we heard that the Indigenous flag had just somehow been “freed” by the Morrison Government. This seemed like good news, though most of us probably hadn’t previously been aware of its imprisonment.

In fact, like the one-word change to the National Anthem just before Australia Day last year, the flag announcement was just a cheap, feel-good, sugar-rush publicity announcement by Scotty from Marketing. A tokenistic media bite, of little avail or importance to Indigenous Australians.

A DAY NOT TO REMEMBER

The fact we celebrate Australia Day each year on this date, January 26, is a glaring example of just how deeply ingrained the casual racism of the nation is towards First Australians.

The lead up to this day, as is usual in recent years, has been marked by the publishing of a series of opinion polls about Australia Day. The conclusion trumpeted throughout the mainstream media and some of its supposedly progressive alternatives is that Australians overwhelmingly support A-Day remaining on its present date. The hallowed day upon which it has been celebrated since time immemorial — or at least since 1994. 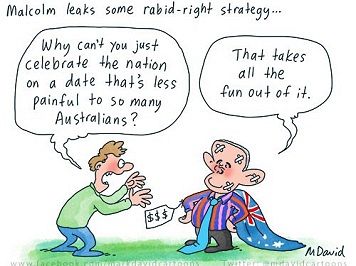 This year’s polls, as ever, were all purported to be “representative samples” of the Australian population. The results were broken down into various demographics ─ age, religion, sex and so on. Indeed, the Conversation’s poll suggested more young people are supporting changing the date this year, which is somewhat encouraging.

But the only demographic that should be of even the slightest interest in this debate is the constituents of the ancient civilisation who occupied this continent before, for aeons. Because it was the arrival of convict ships on 26 January 1788 to establish the Colony of NSW – the very date Australia Day marks − that ended their peaceful relationship to this land. If they don’t think it a very fine day to celebrate the nation, then it wouldn’t matter if 100 per cent of the settler population loved it, it would still be wrong. Wrong, divisive, disrespectful and ─ whether intentional or not − racist.

The last poll Independent Australia could find that surveyed the Indigenous population’s attitude towards celebrating Australia Day on January 26 was from half a decade ago, in 2017. Then, the McNair polling company found the majority of Indigenous Australians wanted the date of Australia Day changed, with only 23 per cent feeling “positive” about the day. Of course, given the dispossession, devastation and death caused by the invasion of the continent by colonisers, this makes a lot of sense and is a finding unlikely to change any time in the future.

And it means that the only thing established by most Australia Day polls is whether Australians have become more, or less, racist over the past year.

For invaders to celebrate the date of invasion, while their vanquished still suffer and contest their sovereignty is simply an act of gloating. And no number of paid Black actors appearing in Government commercials to promote the present date can make it any less repugnant.

But then, Coalition Federal governments have never really wanted to help Indigenous Australians. What they want – even among the slightly more progressive elements of the Liberal Party – is for Indigenous Australians to stay calm and quietly assimilate. Recall, for instance, former Prime Minister Malcolm Turnbull’s paternalistic rejection of an Indigenous Voice to Parliament on ABC’s Q&A in 2017.

On Monday (24/1/22), a bizarre situation in which anyone wishing to display the Aboriginal flag was compelled to seek permission for the privilege and pay a fee came to an end, after the Morrison Government acquired the copyright and licensing rights to this flag for around $20 million.

This issue had been bubbling under the surface of reconciliation since sprinter Cathy Freeman wrapped herself in the Aboriginal flag for a victory lap at the Commonwealth Games in 1994.

The Aboriginal flag was designed by Harold Thomas in 1970 and first flown on National Aborigines Day, in July 1971. The following year it became the official flag for the Aboriginal Tent Embassy and was later proclaimed as an official flag of Australia under the Commonwealth Flags Act.

An Indigenous-led “Free the Flag” campaign had for several years:

'... called for the Aboriginal flag to be treated like every other officially recognised flag in the world, free of licensing agreements and allowing Aboriginal people to have equal rights and access.'

Now, according to Prime Minister Scott Morrison, the flag may be freely used by anyone without seeking permission or paying a fee, so long as it is presented in a "respectful and dignified way".

This sudden development has occurred not only in the week of Australia Day but also in the last months before the upcoming Federal Election, ticking a box labelled "Aboriginal initiatives" in the Prime Minister's campaign folder. 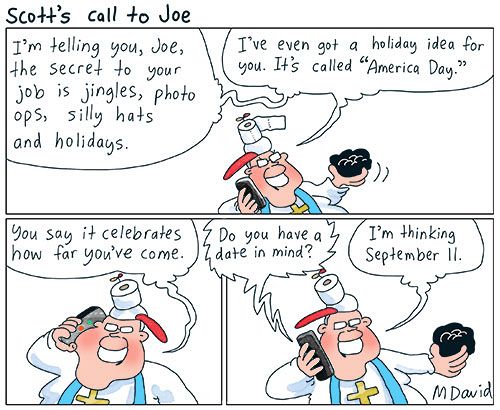 But why does the Australian Government need to buy and control the use of the Aboriginal flag?

As Professor Bronwyn Carlson, a First Nations person, wrote in another Conversation article, the Australian Government had no right to "free" a flag it doesn't own:

…The truth is the Aboriginal flag has always been our flag. We didn’t need an act of parliament to recognise its significance…

...Morrison's statement about having “freed” the flag for all is offensive.

It is ours; he has no authority to “free” it.

Speaking to IA, Dutton also expressed significant misgivings about the Government's motives in buying the rights to the Indigenous flag:

Where has a government ever pressured an owner of a copyright, who legally held it, in this case the Aboriginal flag, to sell it on and why?

What is the motivation for this long term, beyond taking it from the copyright business owner? Is it actually “freed”?

How will they manipulate this in the future if it no longer suits their colonial views?

Dutton explained that like other previous Coalition Government Indigenous policies, “freeing” the flag is essentially an empty statement, which does not translate into more freedom or better outcomes for Aboriginal Australians:

Closing the Gap — what does that mean? It’s just ticking a box but does not lead to meaningful change.

They also suffer disproportionately from COVID policies, with the virus now spreading unfettered through vulnerable communities.

Meanwhile, a constitutionally recognised Voice to Parliament is ignored and substance continues to be lacking in this Coalition Government’s position on Indigenous affairs. All we see from the Morrison gang is "tick a box" policy announcements, designed to dazzle briefly and fade away just as soon.

But hey, the flag was “freed” so it can fly alongside the Colonial one on Invasion Day. For now, anyway.

This was offensive, argues @Macquarie_Uni @BronwynCarlson. "It is ours; he has no authority to 'free' it". https://t.co/f0YDRmMgJT