Astroturfing the Senate: Another attack on democracy by the 'haves'

The recent Senate astroturfing scandal by the 'Family Office Institute Australia' is another example of the elites in our society being willing to manipulate democracy to advantage their own selfish concerns, writes John Maycock.

The recent "Family Office Institute Australia" astroturfing “attack” on the Senate should not just be seen as an outrage by all, no matter the political party they prefer, but it also should be heard as a wakeup call as to the dangers in giving to a few the resources that belong to the many.

(It is not just mineral resources referred to here, the wealth generated by the nation belongs to everybody — after all, it is generated from the bottom up.)

What this astroturfing affair does reveal is what that “lucky few” really think about how democracy is done. Bear in mind here that this astroturfing event should not be considered in isolation – no doubt there have been others – but rather it is just another example of the various lengths that those with the economic power will go to in order to skew the democratic process to their liking. Other examples include political donations (graft and corruption), favourable/un-favourable media coverage (lies, dog whistles, kingmakers) and clothing their machinations in respectability (religion, honest successful business people).

So then, these people are collectively those who we are supposed to look up to as role models, examples of what can be achieved as well adjusted members of a capitalist democracy; indeed we are all encouraged to aspire to attain similar wealth to theirs — ”work, save invest”.

However, just like the paedophile priest (amongst others), these people tell us they believe in principles that we should all not just adhere to, but that by adhering to those principles we can all gain access to a utopia. However, in both instances, a utopia measured against a yardstick based on those less fortunate than oneself — hell in the first instance and working class poverty in the second. Indeed, there is no let up in the effectively identical victim blaming levelled at both those perceived to be heading for hell and those trapped in working class poverty.

It seems then that neither the paedophile priest nor the wealthy believe or practice what they preach. The priest uses his position to further his apparent hell inviting activities, just as the rich tout our democracy as representing us all, while at the same time subverting democracy to suit their own selfish agenda.

We are told to work hard, be honest, adhere to our social/democratic/Christian mores, lore and laws (taxes anyone?), and then you too can be “bathing” in wealth. But it’s just that that doesn’t appear to be, for the most part, how the rich accrue or maintain their wealth and power over and above the masses.

And, of course, the fact that our parliament/government has been infiltrated by people of the same calibre as those we are discussing (Cayman Island Mal and his predecessor’s $80 million net worth, for example, and not forgetting those rabid right wing/fundamentalists draping themselves in the cloak of religion), begs the question: did any of the Liberals in either house of Parliament know the truth about the Family Office Institute Australia (FOIA) submission before the fact?

Or, indeed, did any of the Liberals actively participate in, or encourage, the setting up of the FOIA? Because, if they did assist, it is a conspiracy designed to subvert democracy, conjured up by people who are not just supposed to believe in democracy, but also by the same people we elected to be the custodians of our democracy?

Now, if we consider democracy as a resource – although an intangible – which we all have equal access to (as it is sold to us), it can be seen that we – “the many” – collectively (at the ballot box) hand our share of that resource over to “the few”, with the expectation/understanding that those “few” will exercise the power of those resources we have handed to them for the good of the “many”.

Just as notions like trickle down, philanthropy and such are supposed to justify governments handing tangible national resources over to the few, implying that the few will use the power of our share of those resources for the good of the many.

However, in light of this astroturfing affair, and all else said, it can be seen that those who control our tangible resources – mineral, economic and information – are using the power that provides them to hijack our intangible resource — democracy. There is a big disconnect between how the haves treat democracy and how the have nots believe democracy is treated by the haves; that and politicians who are in a symbiotic relationship with the “haves”, or are outright “haves” themselves (claiming that philanthropic and/or Christian principles are behind the supposed benevolence that brought them into politics), between them have completely broken democracy.

More worrying, however, is the fact that although people are onto what is happening (sift through the comments on this IA article, for example) it seems that those who have been usurping democracy, foreseeing a backlash from logical reasoning people, have also been “manufacturing consent” based on xenophobia and hate. They have been driving a one-sided religious ideological/political divide in the community, where those propagandised by the MSM/L-NP/RWNJs believe they are some sort of warrior heroes fighting a battle against what are actually illogically reasoned intangible threats. At the same time, these automatons are convinced that the opposition voice (which they appear to hate as much as the intangible threats) is driven by political ideologies of the “left”. (See HERE for more on this.) 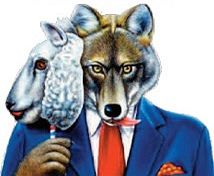 @independentaus has a practical guide on how to spot an astroturfer or an online fake http://t.co/iOV9KuCL #auspol

And herein lays the problem for those who would “rise up” against this hijacking of our democracy: it would more than likely be a “rise” from the left — or at least, with Murdoch’s help, would seem such to those aforementioned “warrior heroes”, who they appear to have been shaped up as a “fifth column”, like sleeper agents spread through the community

In other words, those few who need to be brought to account, if we are ever to reclaim democracy, have established a first line of defence within the ranks of the many, reflected in the polls/elections and the lack of support for many valid social issues.

And this is also a problem for those commenters who pine for a revolution. That is, depending on how well that fifth column is “primed” (and those warriors hitting the streets on the 22nd of this month certainly like to threaten to inflict considerable violence on lefties), the battle to take back democracy could take place within the ranks of the working class — a fight where everybody loses, except, probably, for those lucky few who would bring us to revolution in the first place.

* NOTE “The Family Office Institute Australia” cannot be linked as it appears to only exist on paper.