Will Abbott clamp down on Reclaim Australia's racial hate rallies?

Reclaim Australia, an extreme right-wing group inciting religious and racial hatred is planning rallies across Australia this Saturday, 4 Aprll. John Maycock asks whether Prime Minister Abbott will be true to his word and shut them down.

AS THIS WRITER recently reported in Independent Australia, following a review of counter-terrorism strategy, Tony Abbott declared his intention to:

I followed up with the question:

‘…if they plan to tighten the “speech” laws, they surely do not plan to shut down the likes of themselves, Bolt and Pickering, the Murdoch chorus line or, indeed, any rightwing commentator — so just who do they intend to shut down?’

With this in mind, consider the Reclaim Australia rallies, planned Australia-wide on 4 April 2015; a movement that is inciting religious/racial hatred, preaching hate, and blatantly spreading discord and division.

The main people behind this movement appear to be groups like Australia First Party, the Australian Defence League and various other radical right/white groups who import their extreme ideas and propaganda from outside Australia, particularly the U.K. and especially the U.S.

These “reclaimers” have rebadged their ideas as Australian’s ideas and label those who oppose this importation of foreign “culture” as un-Australian; ironically, accusing them of being complicit in allowing other’s to change our culture. This is the true mark of a bully —turn your attack into a defence.

And these rallies could be a problem. Recall that previous occasion when people primed on these ideas took to the “streets” (or should that be beach), resulting in the Cronulla riots. The various Reclaim Australia Facebook sites set up to “spread the word” are loaded with “veiled threats” of mayhem. 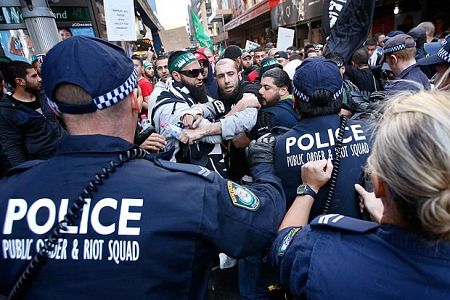 More troubling though, the problem has escalated. There is now an anti-reclaim movement calling for protests in the same places at the same time — surely a recipe for a possible catastrophic clash of ideologies that should not be allowed to go ahead!

Here is one of the more benign comments posted (since removed) by a “reclaim” supporter on an “anti-reclaim” FB site:

‘be sure all you left wing chicken nuggets turn up to this, your insignificant numbers will only make ours look bigger your voices will be drowned out and actions unheard as you will be swarmed and out numbered by genuine australian loving patriots who reject your terrorist sponsoring wahabbist islamic ideology and who will be shouting you down as we stand up for what our for fathers have fought and died for over the centuries our freedom

It seems they have draped themselves in the veil of patriotism, declaring all opposition as un-patriotic “haters” of Australia, and lefties.

These people represent a radically extreme political/religious ideology, and it appears their “sights” are set on much more than Islam, indeed, this rally is more about “attacking” fellow Australians who do not acquiesce to their imported ideology; the supposed problems are a “whistle”, “tuned” to bring out “blind followers” to agitate against all Australians who disagree with them.

Their top order “draw card” is protesting Islamic extremism, conjuring in the mind the terrible state of affairs overseas, and suggesting that it is directly affecting “us” in the public “domain”. They ask us to:

‘…stand as one against extremism we are currently facing in Australia.’

But then as evidence of this effect, they cite ideas that, as pointed out above, originated elsewhere —  the supposed threats to Christmas, the Halal issue, etc. (American memes edited to sound Australian) that have been doing the rounds for years in those ridiculous emails and now FB posts that dare you to pass them on (unless you are a coward).

These memes (myths) have been rebutted time and again, revealing their genesis, the ideology behind them and the outright factual misrepresentation, even down to showing the morphing from American specific to Australian specific narratives, and of course the probable “anti-other” processes involved in taking such generalising miss-information on as a “truth”, xenophobia.

The “reclaimers” hear that as racism, which suits them as they believe they can both defend and attack from that position from

'we’re not racist you $#@ lefty, Islam is a religion, not a race”, to, “you ^%$# lefties don’t even know what racism is, you call us racist and that proves you are the racists.'

Indeed, they know that this counter narrative to their position reveals such and, like the “I’m not racist but...” preamble, they attempt to head off criticism with:

‘This is not a supremacist rally, it will simply be Patriotic Australians of all nationalities & beliefs standing united against radical extremism!’

‘Free democratic speech against the far left and the Islamic extremists.’

Now the notion “Free democratic speech against” seems a bit “loaded” (freedom of speech is also in the “reclaimers” list of threatened values). They certainly haven’t been missing out democratically; considering this IA article discussing:

And also considering Labor’s complicity in the detention centre betrayal of refugees' Human Rights, it can be seen that they have been democratically getting what they wanted from both major parties.

But then they also want to exercise that freedom of speech “against” someone, and this has to mean in the public domain. Yet even here they have a free reign. If they weren’t “speaking” there would be no “counter narrative”.

As for their targets; “Islamic extremists” is a “whistle”, blown to give “meat” to their otherwise anti-Muslim myths, those afore-mentioned emails and FB posts that are regularly re-run for example. And the “far left” is not a real entity at all, in that it is the counter narrative that the “reclaimers” are objecting to, and for them the counter narrative is personified as lefties irrespective of where the “message” is coming from.

Pol Pot was too.. Abbott: Australians 'sick of being lectured to' by #UN http://t.co/d6bQg4KwAZ @smh #auspol pic.twitter.com/8hp1ZHLpbQ

The “reclaimers” are sick of being “lectured” to by fellow Australians when they (the “reclaimers”) sprout their nonsense in a “public” sphere. Facts are their enemy, the truth discredits them, and the “lecture” is the counter narrative that they direct their divisive hate campaign against. Indeed, it is the freedom of others to speak “against” them that they seek to restrict.

Now is the time for Abbott to make good his threat to reign in purveyors of hate and division by putting a stop to the rallies. To do this he would have to give a “lecture” — to dampen the affect of “reclaimer” cries of rights and freedoms’ abuse. That would require him to publicly rebut the myths, reveal their genesis, the ideology behind them and the factual misrepresentations. Furthermore, he'd need to stress that taking such generalising misinformation as “truth” suggests a “problem”.

And here lies the irony. This is the counter narrative that the “reclaimers” are intent on shutting down. As Abbott is complicit in bringing them to this, it is only fitting that he should be the one to deliver the lecture and incur their wrath.