For those looking for an update on IA’s most recent Ashbygate story – Ashbygate emerging – the Ashbygate Trust provides an update along with fresh information. 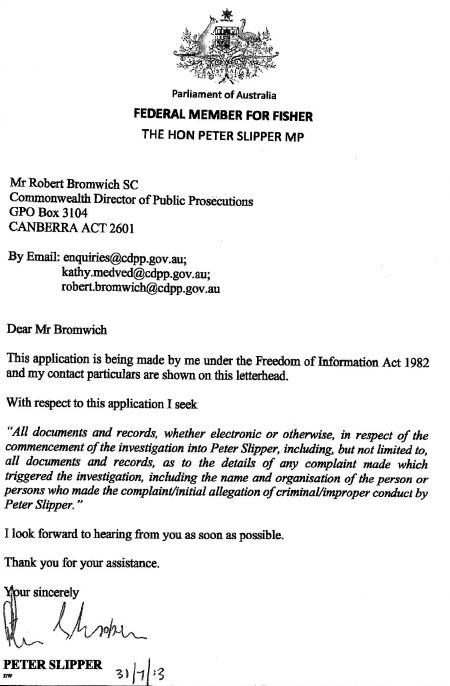 THE Ashbygate emerging story has not been mentioned in any mainstream media publication, however it has received over 60,000 pageviews and more than 16,000 unique visits. This is quite a lot, even for a highly popular news website like IA.

Christopher Pyne has not been questioned by the mainstream press about the story, however on Sunday 18 August IA sent the following message to the Opposition frontbencher:

On Saturday 17 August 2013, the online magazine Independent Australia published an article under the heading ‘Ashbygate emerging’.

The article was submitted for publication by the Ashbygate Trust and, given its nature, the publisher made every reasonable effort to ensure its content could be supported before accepting the item for publication.

We are writing to invite your comments regarding this article and assure you we will publish your reply, unedited, of up to 1000 words. We reserve the right to then add editorial commentary to your considered response.

We would appreciate your earliest response.

He has not yet responded. 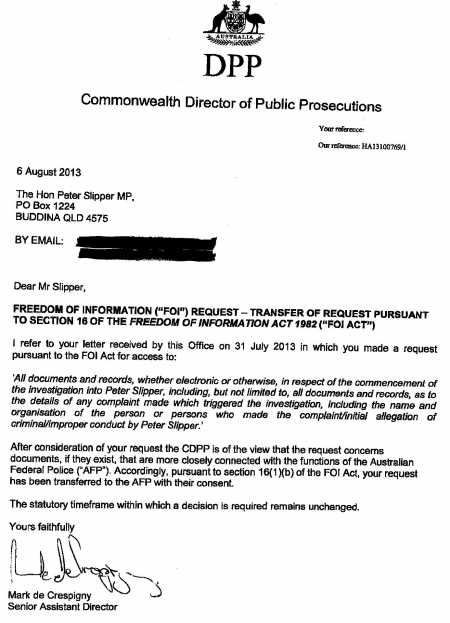 Interestingly, the most robust response to our article was received from certain journalists from the Sunshine Coast Daily, who objected with some significant sensitivity to a supposed slight — namely that they have, may, or might, have accepted the odd gratis libation from LNP Fisher candidate, Mal Brough.

One, we never stated nor implied the dogged SCD journos had ever accepted free beer. But now we think about it — how unAustralian is that? Have they never seen Wake In Fright? Maybe they’re new to the Yabba? We don’t even know if Mal likes beer. It was, of course, no more than a fanciful projection.

Second, after a couple of irate phone calls, Dave penned the following editor’s note — which read, in full:

EDITOR’S NOTE (19/8/13, 5pm): Certain Sunshine Coast Daily reporters have claimed to have been defamed by what we considered to be a rather innocuous phrase:

‘To seize Fisher, all Mal had to do was hang around the Sunny Coast with sleeves rolled up and give free beer to the dogged SCD journos and he was a shoe-in…’

This quote originally, merely for the benefit of readers, had a link to a recent story the paper had done on Ashbygate. It should be clarified that this sentence was meant to figuratively demonstrate that Brough had no need to intervene in the Slipper affair as he was, as the pre-selected LNP candidate in a safe conservative seat, virtually assured of election. The reference to “free beer” was a figurative, rather than a literal, comment — there was no suggestion made or intended that Sunshine Coast Daily reporters had ever accepted free beer from Brough, or even that Brough had ever offered any. The comment was also not a reflection on any particular journalist, but rather that IA feels – we believe with some justification – that the newspaper as a whole, editorially, has been rather more tenacious in its pursuit of Peter Slipper over alleged entitlement misuse than they have in Brough’s part in a combination to bring down the Government. Nevertheless, to any journalists who feel they have been unfairly tarnished by this comment, we sincerely apologise, as absolutely no insult was intended.

Out of the now more than 280 comments the article received, not one mentioned the SCD. Not one tweet that we saw mentioned he SCD. Facebook, as far as we can tell, was also a zero. Our readers did not appear to see what the SCD saw.

Well, we are back on SCD turf today — on the Sunshine Coast seeking more information. In South Australia, we continue our search for the missing staffer. We await numerous FOI requests — as do the Slippers, as you can see by the documents published in this piece, including directly below: 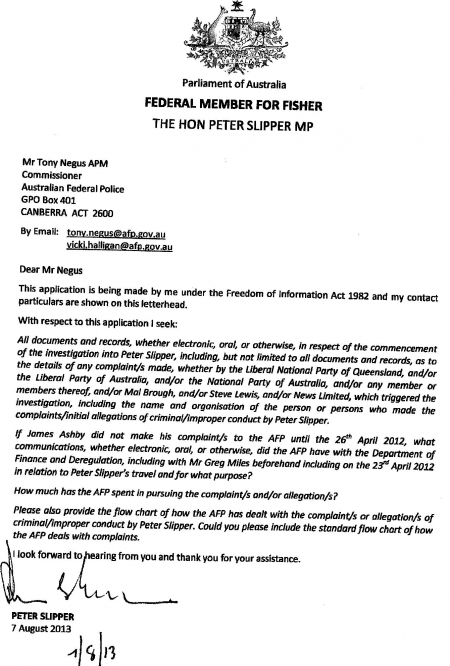 Later this week, or early next week, we expect to formally receive a legal opinion which suggests Mal Brough may have committed a criminal offence by conspiring with Ashby and Doane to copy Slipper's diary. With Federal Court judge Steven Rares' decision about Brough being in a combination with others to bring down the Government should have been enough to get him disendorsed — one would expect this be the final straw.

If it is not, then we will see that the LNP under Tony Abbott hold their opponents to far higher standards than they hold themselves.