'It seems to be an unwritten law that the banks are untouchable, or a "no go zone" when it comes to them committing criminal behaviour.' Bank fraud victim Thomas Brookes fights back with a new campaign.

I HAVE BEEN taken to the cleaners by one of the big banks, who used fraud, threats, lies and a host of other unconscionable and criminal behaviour to take almost everything I owned.

This is a very personal story for me and my family.

The bottom line in all this is that if you or I defraud a bank, the authorities will be all over us. But when a bank defrauds you, the system covers it up and almost everybody else turns a blind eye. The banks, it seems, don't have to abide by the same laws we do.

There is not a single part of our society that does not involve interaction with the banks. Yet the banks have become parasites of the worst kind. The banks gouge the economy, commit criminal behaviour with impunity, destroy people lives and have no remorse for their corrupt behaviour and, it seems, nobody in authority does anything to stop them. Just a lot of talk and no action.

“The issue which has swept down the centuries and which will have to be fought sooner or later is the people versus the banks.” ~ Lord John Dalberg-Acton, 1st Baron Acton.

I have been waiting 12 years for the unconscionable and criminal behaviour of the banks to become a public issue. In the lead up to the federal election it finally has — with the very wealthy, former banker Prime Minister Turnbull fiercely resisting calls from the Labor (ALP) Opposition for a Royal Commission of enquiry.

In 1994, the ANZ Bank committed fraud and perjury against my family by forging documents in a court action between my family and ANZ. Initially, we were not able to prove what they did.

Then, in 2003, an anonymous whistleblower from within ANZ sent me over 100 pages of original bank documents proving forgery, fraud, deceptive conduct, conspiracy, perjury and numerous breaches of court regulaitons by the ANZ Bank.

Of course, ANZ then denied any wrongdoing and instead responded with threats and clumsy and deceptive attempts to recover their documents.

In frustration, we then went to Channel 7’s Today Tonight program, who spent three months investigating the documents.

“An extraordinary bank scandal — how one of Australia’s biggest banks actually forged documents.”

You can watch it here:

Please be sure you watch to the end including the “deleted scenes”, which detail alarming comments by ex-senior bank manager John Salmon, confirming that the big banks routinely

“... doctor documents [when they] find themselves in litigation.”

Within a few days of the Today Tonight story going to air, ANZ had illegally accessed our unlisted home phone number (we had changed address multiple times and moved interstate) and proceeded to threaten my wife and then myself with legal and personal harm.
They confirmed that:

“… word has been filtered down to me [the ANZ representative] from higher up to have a word to you.”

Despite indictable proof of blatant criminal behaviour and a deliberate cover up, nobody would take on the ANZ — not ASIC, not the ACCC, not the APRA and not the Banking Ombudsman. All they told us was what they couldn’t do. NSW Police looked at the documents and agreed criminal forgery and fraud had been committed and then proceeded to do absolutely nothing further about it at all.

Letters to politicians ‒ including John Howard and Malcolm Turnbull ‒ ministers, commissioners and attorney generals all ignored what the ANZ had done.

Multiple recent communications to authorities, since the banks have become an issue in the current federal election, have been met with just total ignorance or stonewalling.

It seems to be an unwritten law that the banks are untouchable, or a "no go zone", when it comes to them committing criminal behaviour. What is going on here?

Of course, as anyone who has read the articles of Dr Evan Jones on this publication knows, my story is just one of many — a multitude of defrauded and defunded bank victims

And, of course, the banks will bitterly resist any action and lobby their cronies in government to prevent a Royal Commission into their widespread criminality. For instance, we should note the recent outrageous threats to interfere in the upcoming federal election by the Australian Bankers Association CEO Steve Munchenberg. He publically threatened a mining tax-style ad campaign to fight Bill Shorten and the ALP’s proposed Royal Commission of enquiry into the banking and finance sector.

"As the great parliamentarian Edmund Burke said, 'The only thing necessary for the triumph of evil is for good men to do nothing'." ~ John F Kennedy

So how can you do something about it?

If you, like me, are fed up with seeing bank scandal after bank scandal with nothing getting done about it, this is your chance to do something about it and constructively hit back to force long overdue change.

I have started a GoFundMe page to crowd fund the campaign and put pressure on the Government to support a banking Royal Commission. 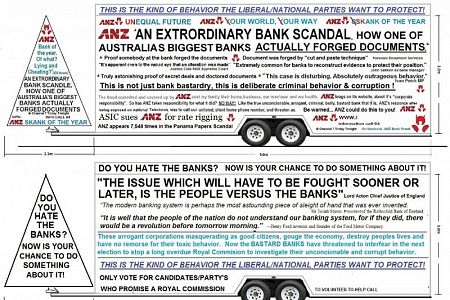 My plan is to construct as many of these huge mobile billboard trailers as we can to pressure LNP marginal electorates, so these LNP candidates in turn pressure the party and Malcolm Turnbull for a bipartisan Royal Commission.

Dr Evan Jones' shocking analysis of bank corruption - happening at a bank near you. https://t.co/1jWFNCTyFX @IndependentAus

21 June 2016, 4:30pm 'It seems to be an unwritten law that the banks are untouchable, or a "no go zone ...
Join the conversation
comments powered by Disqus
News updates