A safety net for all of us

As the Turnbull Government prepares to deliver what is expected to be another tough budget, it's time to stop the welfare shaming and support the needy and deserving in our society, says Aaron Tucker.

MANY AUSTRALIANS only ever have fleeting encounters with our social services sector.

Maybe your daughter and her husband had a child and received a baby bonus, perhaps your son accepted Youth Allowance while studying his way through university.

Over a few generations and many more governments, the Australian people have instituted a robust social security network.

This safety net is funded through government tax receipts that provide people with a helping hand when they are in need.

This helping hand takes the form of unemployment benefits for the Holden factory worker who recently lost his job or childcare subsidies for the mum who wants to maintain her career. Most likely, it is the age pension payments for our country’s grandparents, often the same people who literally cleared the land we now grow produce from and export to the world.

However, more and more, our government is telling us of the massive burdens these safety nets place on our country. We are told of unsustainable budgets and the need to curb spending and that we are experiencing structural, that is, permanent rather than cyclical, deficits for which there is only one escape.

What can we do to reduce our burden? Of course, we should reduce the amount we contribute towards the most at risk members of our community.

Do you want to know what our country’s total expected spend this financial year will be? It’s a shade over $434 billion. Of this amount our social security and welfare system is expected to use $154 billion. At roughly 35 per cent of the budget it is this country’s largest expenditure by a margin of $60 billion.

For all of the kicking and screaming you have heard from our government ministers, you might expect the less scrupulous amongst us to have run up a fairly large unemployment bill.

AUSTRALIA spends 3.5% of GDP on age pension, while UK spends 6%. France and Italy spend 14% and 15% respectivelyhttps://t.co/9dAmesfheI

Well, what about those people living it up on the age pension you might ask? First of all, wow. It takes a great deal of discipline and planning to live at all on the age pension. However, with assistance to the aged coming in at 39.4 per cent of our social security budget it does make for a big target.

Increasing the age people can access the age pension will go part of the way. Talk of including the family home as part of the assets test has the frightening possibility of becoming actual policy.

What on earth do we think we are doing to the people who helped developed this country? Didn’t many of these people help build The Snowy Mountains Hydro-Electric Scheme and the Sydney Opera House as well as put sandwiches cut into triangles in your lunchbox for school?

These men and women deserve to have dignity in their retirements and our respect for soldering on through the hardships of life. What they do not deserve is the scornful rebukes for having bought a house 40 years ago that has since boomed in price, or for staying at home to care for their families and homes.

So in an age where the government sends you a letter to show where your hard earned tax dollars have been spent, let’s break that down into something we can understand. If you earn the average full time wage (including overtime) of $80,927.50 per year or $1,556.30 per week then you are paying $17,889.99 in tax per year. 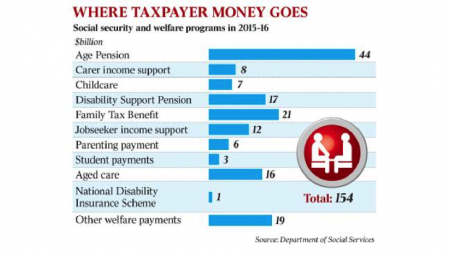 So what are we really arguing over? Well if you work all year then only $32.95 of your weekly wage goes towards assisting the aged. That’s right, for less than $35 of your $1556.30 wage every week you are helping our country’s senior citizens put food on the table every day, buy medicines and read the newspaper.

We are a country of hard workers but we aren’t fortune tellers. Sometimes car factories shut down production, nickle refineries fold and GFCs  wipe out our retirement savings. It’s when these things happen that we, as a civilised and modern country, need to help. We do what we can to get these shell-shocked people get back on their feet. We reach out to those workers who have fallen on hard times, helping them up and encouraging them to start again. We do these things for each other and we would do them all for you. What is the bill for all of this assistance on our average income earner? It doesn’t even cover the ubiquitous coffee a day for a week; the final bill is $6.25 per week.

The mark of a great society is how we treat our fellow citizens when nobody is watching. We honour the memories of those that came before us by caring for those who are, no matter how briefly, less fortunate than ourselves.

We have a choice; we can support the needy and deserving in our society or we can stand blithely by and watch as these people fall through the cracks.

Walk tall Australia, our safety nets are worth fighting for.

Aaron Tucker works as a data analyst and business consultant within the private sector of Western Australia.

Middle Australia to feel age pension pinch the most - https://t.co/713sJSu6Db

"The age of entitlement is over" for everyone - except politicians. Kero-Bronnie's post #AusPol pension is OBSCENE! pic.twitter.com/yd7JqGMm6Q

A safety net for all of us

22 April 2016, 4:00pm As the Turnbull Government prepares to deliver what is expected to be another tough ...

Medicare: We can do better

Tax: One of the two certainties of life, so get over it!

16 April 2016, 8:30am In life, as the fatalistic proverb goes, only two things are certain: death and ...
Join the conversation
comments powered by Disqus
News updates