A dark and bumbling future for Australia

Australians should be very, very, afraid about what might happen if Prime Minister Tony Abbott and Deputy Prime Minister Barnaby Joyce get a licence to run Australia, says senior correspondent Barry Everingham.

One of the scariest and most bizarre political scenarios since the Joh for PM Campaign was laughed out of politics a few decades ago has emerged — and it centres around Tony Abbott and Barnaby Joyce.

Let’s leave Abbott aside for a moment and take a look at the jester of the Senate, Barnaby Joyce, who has signalled he’s looking for a seat in the House of Representatives, so he can roll the current Leader of the Nationals, the anonymous Warren Truss.

Now, if this happens and the Opposition gets the Treasury benches, this pair of Jesuit educated misfits will become Prime Minister and Deputy Prime Minister — giving the egregious conservative Cardinal Pell unfettered influence into the shaping of a future Australia. 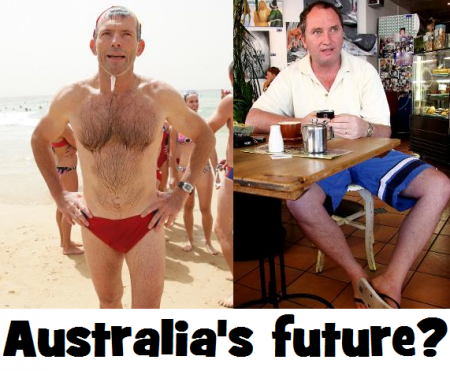 An Abbott, Joyce, Pell, triumvirate – setting polices of health, education, defence and foreign affairs – will march this country right back into the dark ages.

Back to Abbott, whose thought bubbles will become policy.

In Barnaby’s case, linking him to thinking is a surprising oxymoron — his performances in the Senate and at media conferences are, in the main, unintelligible and somewhat reminiscent of the Goon Show — without the humour and wit.

Abbott and Joyce, of course, were against the Government – very correctly and very humanely –  stopping the export of our livestock to Indonesia — where local  slaughterhouse workers had the kind of fun with our livestock that those brave US Marines had with the “terrorists” incarcerated in George Bush’s and John Howard’s Guantanamo Bay playpen.

Bugger the animals was their catchcry — the cockies needed the money.

The swaggering and – given his ardent love of undergraduate pugilism – most likely punch-drunk Opposition leader, will take the move towards a Republic off the agenda, and one of our most respected Governors General, Quentin Bryce, will no doubt be replaced by John and Janette Howard — whose gravy train has been standing at the station in eager readiness waiting to fulfil their penchant of living off the public purse and whose tenure in Sydney’s Kirribilli House – and not The Lodge – cost taxpayers untold millions of dollars.

Of course, we’ll see Bronwyn Bishop as House Speaker under an Abbott Government; I can’t wait to see her in the Speaker’s wig and bow tie, accentuating the quality of frontbenchers such as Kevin Andrews, Phil Ruddock, and Peter Dutton — who will no doubt hold ministries.

Lastly, I noticed the agonising Sophie Mirabella was waxing ecstatic about the ‘waste’ of propping up the jobs of Ford Australia’s workers — she may have forgotten these workers are not able to tap into the largesse of an ailing law professor to secure funding for their homes.

In all, Australians should be scared – very scared – if Abbott and Joyce get control of our country.