Barnaby Joyce's indiscretions with his former staffer dominated the media early in 2018. This excellent article by Bee Jones from March gathered over 21,000 unique views.

VIKKI CAMPION’S behaviour appears to indicate she is an intelligent operator who has played this scandal like a Stradivarius.

A former media adviser to the then Deputy Prime Minister Barnaby Joyce, Campion does not appear to have naïvely fallen under the spell of Joyce’s charms.

Barnaby Joyce’s life has been under the spotlight since early February, this year, after news broke in the mainstream media of his relationship with his former staffer, Campion, who was believed to be pregnant with his child. This culminated in Joyce's resignation as Deputy Prime Minister and Leader of The National Party.

What may have been closure on a scandalous chapter of Australian politics didn’t quite give us closure for the following reasons.

There has yet to be a satisfactory consequence for Joyce’s actions regarding the two high-paying jobs especially created for Campion.

Another reason is Joyce’s own bizarre admission he may not be the biological father of Campion’s child.

Finally, because of Campion’s pregnancy, she has been somewhat shielded from the typical onslaught of public scrutiny that may otherwise be targeted at a woman in her position. Her deliberate low profile (she has deleted social media accounts and avoided media spotlight) has helped to make her an enigma to the public.

Why Barnaby Joyce’s private life is a matter of public interest https://t.co/sq7P4aebsq @IndependentAus

Though Campion was not a public figure, she has had no compunction about joining Joyce when during an interview with Fairfax or, for part of a phone interview, to deny paternity. So that contradicts the old "our private life is private" argument — she’s a player in the game.

Australia is on tenterhooks with the imminent arrival of Campion's "bundle of joy" – supposedly due in April – but I have a hunch it’ll be any day now. I reckon about nine months to the day from when Joyce was in the UK and Europe — when they were supposed to be "apart". Joyce’s denial of paternity comes, coincidentally, just when his expenses are being investigated.

Did Joyce and Campion concoct the paternity denial to cover the fact she accompanied Joyce to the UK and Europe in June and July 2017, when she was the media advisor for the Minister for Resources and Northern Australia Matt Canavan?

I compared Joyce’s expenses for that trip with those of Finance Minister Mathias Cormann who also took a similar trip at the same time as Joyce: 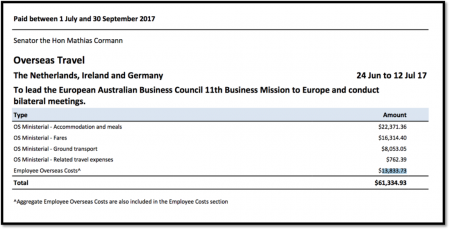 Based on those figures, it appears Joyce may have taken more than one staff member. Usually, Government Ministers are automatically approved for one staff member to accompany them. Under Ministerial Guidelines, the prime minister must approve all ministerial travel, including spouses and all staff.

This timing of this trip was identified – by Joyce himself – as the time of conception of Campion’s baby due in April 2018. Joyce said he was away on a taxpayer-funded trip with his wife — he and Vikki were apart at that time.

'The pair’s travel does appear to make the paternity uncertain. Mr Joyce was in Europe travelling on official business –accompanied by his then wife Natalie – for ten days from June 23, 2017. Ms Campion was in North Queensland at the time.'

So, I did a few calculations and if the baby was conceived on that trip, the due date would be late March.

Barnaby Joyce says he had no choice but to discuss paternity of partner's child https://t.co/WZcaBtSkNE

Campion’s baby is supposedly due in April; if that is true, then the baby would not have been conceived at the time of Joyce’s trip and, therefore, there would have been no need for a "paternity denial" interview. Joyce said “we felt we had no choice but to tell the story” — to the world. A possible explanation is to remove speculation Campion accompanied Joyce to Europe, even though she was Canavan’s media advisor at the time.

Joyce’s paternity denial has also given him the perfect opportunity to suggest that the "stress" of the past couple of months, to which he has contributed, brought on a premature birth in March when it may be a full term birth — possibly conceived in Italy on the taxpayer dollar.

Time will tell. Campion was last seen in public on Friday, 2 March 2018 at Canberra airport — that would suggest it was her last flight, adding weight to the March birth theory.

Campion did garner some sympathy when Joyce suggested the paternity of her unborn child was a "grey area". That puts her in a pivotal position of power. Seemingly complicit with every one of Joyce’s disastrous steps in front of the media, she is now in a position where she completely controls the media and the relationship reins.

As well, Campion's enigma status puts her in an ambiguous position — the public doesn’t know her and people haven’t yet made up their minds about her. After the baby is born the gloves may come off and she may attract some negative attention from which she was previously insulated due to her pregnancy.

Will the notoriously "private" couple seek out a high-paying media deal for the first pictures of the baby? It would be in keeping with their on-again, off-again relationship with the media.

It may also be another indication that Campion is quite comfortable in the media spotlight, contrary to her behaviour during her first interview with Joyce:

'Ms Campion refused to be photographed during the interview and is deeply uncomfortable with the public scrutiny placed on her, Mr Joyce, and the couple’s respective families.'

Campion has a choice to make. She can either stay with Joyce and enjoy that spotlight and the trappings of political life or, alternatively, should she choose to leave, she is perfectly positioned to become the "victim".

Joyce doesn’t appear to have the same choices as Campion; he has backed himself into quite a corner. He can continue with the relationship, either possibly raising another man’s child or abandoning a new mother. Furthermore, his chances of garnering sympathy over the relationship were seriously diminished after the "grey area" comment.

And, of course, there is the little matter of the birth registration and paternity fraud.