After years of IA asking for proof he had renounced his British citizenship, Tony Abbott finally produced a letter in July. Ross Jones got an expert to take a close look at it and over 20,000 IA readers took a close look at the results. This was the second of our Sydney bureau chief's three stories in the IA 2017 top ten.

ON THURSDAY, 13 July 2017, Greens Senator Scott Ludlum was turfed out of the Australian Parliament after it was revealed he was a dual New Zealand citizen and therefore ineligible under s44(i) of the Constitution to hold representative office.

FYI rumour mongers: I renounced my UK citizenship in 1993 and here's the proof: pic.twitter.com/tHAeJeqo5T

The timing was no coincidence. Abbott was responding to a tweet by Senator Derryn Hinch, which the @HumanHeadline had dashed off while Ludlam’s seat was still warm:

The question is: why did Abbott immediately reply to Hinch after stonewalling for so long?

The UKVI letter posted by Abbott is dated 7 January 2015, so Tony could have shoved it in everyone’s face any time since then but for his own reasons chose not to.

Labor MP Terri Butler wrote to Abbott back on 23 January 2015, asking him to provide a copy of his renunciation certificate, or at least advise the date. Despite Abbott apparently already being in possession of a letter which, if valid, would have killed the issue stone dead, instead Abbott chose to ignore his fellow MP.

It is odd behaviour for someone with nothing to hide. But then again, Tony Abbott is an odd man.

Yet, when Hinch tweeted the other day, Abbott suddenly leapt to attention.

Why is he so sensitive now?

It was not until the following day – Friday, 14 July 2017 – that Abbott’s UKVI letter became public knowledge, but it received barely any media coverage.

There was this in Junkee:

No, the fact that Tony Abbott was born in the UK doesn't mean he's ineligible to hold office. https://t.co/PVZC8vsZLL

And a mention in the New Daily:

As well as a couple of other web mentions, but that was about it. No big News Corp splash.

So is that it? All over red rover?

Well, not quite. Because the Home Office has refused all our requests to verify it. And this is a problem, because we can see a number of "irregularities" with this document.

The letter didn’t get around much and it is unlikely anyone has given it more than a cursory read, so let’s have a go now courtesy of a vigilant IA reader — something of an expert in the field, given he has a printing background.

Here is the original: 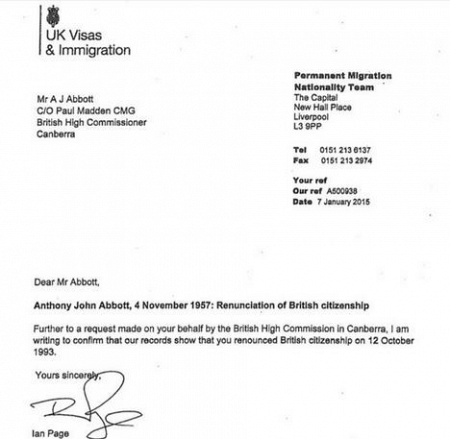 Our expert reader superimposed a grid over Abbott’s UKVI letter, as you can see here: 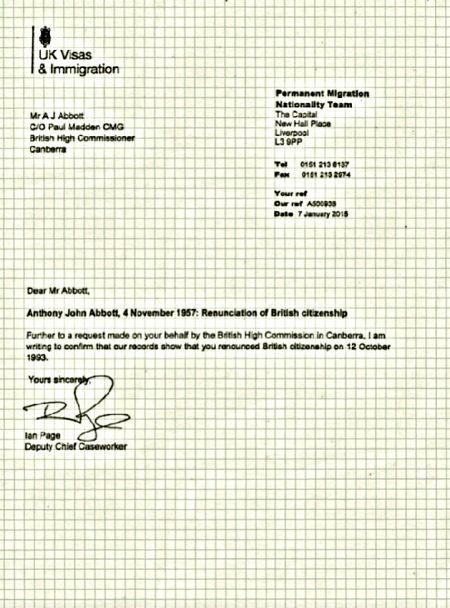 The expert points out several issues with the document, most of them imperceptible to the untrained eye, but two that can be easily detected.

Firstly, the line next to the UKVI logo is not vertical — it’s just not:

For comparison, here is the logo from the UKVI website (as at 2015):

Secondly, the words on some of the lines are not strictly level.

Its subtle, but it’s there. Typewriters can do this.

A 2015 UKVI letter would have been computer-generated and should be tight.

Our expert reader says that some anomalies may have been caused by repeated photocopying — note the unclear crown detail .

Why would the document have been repeatedly photocopied? As far as anyone knows, this is the document’s first outing.

The non-vertical line is a bit more problematic. Professional printers just don’t do that. Off-true elements can mean that element has been shifted — nudged a little.

The UKVI letter was purportedly signed by Ian Page, 'Deputy Chief Caseworker'. Independent Australia called Mr Page, who certainly does exist at the number provided. But, sadly, Page he couldn’t talk to the press and refused to confirm the veracity of the document — or anything else, for that matter.

The letter was allegedly forwarded to Abbott via the British High Commissioner, Paul Madden CMG (my English friends tell me these initials stand for Call Me God).

Madden is currently British ambassador to Japan, but in January 2015 he was indeed British High Commissioner to Australia.

It is interesting that Madden gave the job of confirming Abbott's nationality to a someone without authority to speak to the press — even just to confirm or deny he wrote it.

This becomes even more perplexing when when one considers a UK renunciation confirmation letter received by Minister for Human Services Alan Tudge in 2010:

Even though in 2010 Alan Tudge was a mere backbencher, his letter was from the vice consul, not a mere caseworker. And coffee stain, bandaid, glaring typo and all, it is printed squarely on the page and looks authentic.

It should also be noted that the reference number in the Tudge document is in an entirely different format to the one in the Abbott letter, which may or may not mean anything.

Tudge's letter also has an official stamp on it, which Abbott's letter does not.

Tudge produced his letter, because the fall of former Senator Larissa Waters – a Canadian dual citizen as it turns out – not to mention the latest catastrophe of Matt Canavan (thanks Mum!), has seen foreign-born MPs like him hunting though their desk drawers for evidence of their single nationality.

Independent Australia contributor Tony Magrathea is considered a "birther" nut by some in the lunatic media for his dogged pursuit of Abbott over the dual citizenship matter. In fact, British-born but a naturalised Australian himself, "Mags" is simply interested in seeing this provision of the Australian Constitution applied evenly. And far from only picking on Abbott, he has been diligent in his efforts to gain verification for all foreign-born MPs.

As he wrote to then Senator Waters on 16 July this year:

It is sad to see Senator Ludlam go, but I did write to ask him about S44 at the same time I wrote to you and every other foreign born MP in 2014.

HOME OFFICE STONEWALLS AND CONTRADICTS ITSELF OVER ABBOTT

Tony Abbott could have saved Magrathea a lot of trouble if he had released his letter in 2015, when he allegedly received it, because since 2015 Magrathea has been battling with the British Home Office to get them to release any details of Abbott renunciation.

In short, they point blank refused releasing any information under a freedom of information request.

After considerable toing and froing, this escalated to the point of litigation in January this year.

So, after Magrathea saw Abbott’s tweeted letter, he forwarded a copy to the Home Office, through his lawyers — to tell them he would discontinue his court action if they could simply confirm Abbott’s letter matched their records. It was already public knowledge, so why not?

Anthony John Abbott born 4/11/57 in London and renounced his British citizenship. Could I please request a copy of the form RN he submitted and a copy of the receipt for fee payment please.

The matter is no longer covered by your privacy rules because he has tweeted the information about his renunciation to the world. The form RN and receipt is to confirm the document he showed the world is legitimate.

On 24 July 2017, the Home Office replied to Magrathea, thanking him for his email of 14 July 2017 and advising him that they could

‘... confirm that the Home Office does not hold this information.'

Does not hold this information? What?

As the UKVI forms part of the Home Office, this is the same as the UKVI saying it does not hold this information. But Deputy Chief Caseworker Page wrote in 2015 'records show' Abbott had renounced in 1993.

So which is it? Do they have records, or do they have no information? Or did they destroy all the records sometime after 2015?

The recalcitrance of the Home Office to confirm Abbott's renunciation stands in stark contrast to their eagerness to confirm Malcolm Robert's late renunciation this week.

Media reports about Roberts' British citizenship only emerged on Monday (24/7/17) and yet by Friday, Fairfax's James Massola was able to Tweet that officials had given him the exact date:

So, why the stonewalling with Abbott, yet the carefree abandon with Roberts?

This whole affair is, like Abbott and Roberts themselves, extremely strange.

It’s a big call to say Abbott’s letter is a poorly-constructed fraud dropped only on Twitter to placate Hinch, so we won’t go there.

What we can say, however, is that it is a poor quality apparent photocopy released in haste two-and-a-half years after Abbott got his mitts on it. It smacks of something — maybe just contempt for the electorate, maybe something else.

We can also say that the way the British Home Office have treated any information involving Abbott's citizenship is radically different to the way we have seen them treat other MPs. We have no idea how they can send a letter saying their records show he has renounced and then send another letter saying they hold no information about the matter.

Nevertheless, this is probably the end of the matter — although, while the concerns above remain unanswered, questions will still linger.

Of course, all this could all be cleared up today if the British Home Office simply contacted us to verify Abbott's letter was legitimate — or perhaps otherwise. They have our number.

So British happy to immediately talk about Malcolm Roberts' renunciation but go to court to deny FOI documents concerning Abbott's. 🤔