Kevin Rudd's replacement in the seat of Griffith, Terri Butler, writes to Tony Abbott asking him to put to rest speculation he is ineligible to sit in the Australian Parliament due to never having renounced his British citizenship. Sydney bureau chief Ross Jones reports.

TERRI MEGAN BUTLER is the Labor MP for the federal division of Griffith, basically Brisbane’s inner southern suburbs. It used to be former Prime Minister Kevin Rudd’s seat until he spat his final dummy. Kev’s abrupt but overdue departure triggered a by-election held on 8 February 2014.

Terri, previously an industrial lawyer, had secured Labor pre-selection and, on the day, prevailed over the LNP's Dr Bill Glasson with a 2PP of 51.76%, despite a 1.25% swing against Labor.

It’s probably a much safer ALP seat now and, at 37, Butler has a bright future before her.

IA readers are familiar with the indefatigable Tony Magrathea as the man trying to uncover the truth regarding the Tony Abbott’s citizenship status. The results of his attempts have been well-documented in IA.

Fed up with frustrations attending the almost-impossible task of proving something doesn’t exist, in this case Abbott's 'Form RN' – his renunciation of British citizenship – Magrathea decided both-barrels, choke off, was the best approach.

So he emailed the following question to every MP in the land:

If a politician were to find out about something that might or might not be a crime, should they make that decision themselves or should it be left up to the police? I know most state crimes acts require all who are aware of a crime to let the police know, otherwise they risk being charged with perverting the course of justice, especially if the politician and potential criminal are mates and there has been some sort of monetary or political advantaged gained by staying quiet.

I ask because the Department of Prime Minister and Cabinet declared in an FOI request, 2014-159, in October last year, that Mr Abbott is still a dual citizen of Britain and Australia. They said his renunciation paperwork for the British citizenship does not exist.  If a politician were to find out about something that might or might not be a crime should they make that decision themselves or should it be left up to the police? I know most state crimes acts require all who are aware of a crime to let the police know otherwise they risk being charged with perverting the course of justice, especially if the politician and potential criminal are mates and there has been some sort of monetary or political advantaged gained by staying quiet.

Tony Magrathea, explains why he is not a “birther”, as some have alleged. http://t.co/1TxJxkyRDC

After explaining the possible legal repercussions of their staying quiet, Magrathea asked:

Now that you are aware of the crime or potential crime, will you advise the police or make the decision yourself that all is OK? I would hope you forward the matter to the CDPP, the AG department and the AFP or at least ask a question in Parliament so we can all find out what's going on.

Coincidence, by definition, is a funny thing. Terri was on the ALP campaign trail in Rockhampton on 22 January and got chatting to booth workers.

IA notes it has not yet spoken with Butler, we will try although she is a tad busy at the moment, so the next bit is an informed, but not confirmed, reconstruction.

It seems the ALP booth workers filled a hitherto unknowing Butler into the detail of the Abbott citizenship scandal and Tony’s findings to date in that regard. She contacted her staff, who advised the content of Tony’s email advising MPs of a possible criminal breach — not only by Abbott, but anyone else who knew and was deliberately concealing a crime.

Butler is now on record as the only MP, and that includes the crossbench zoo, to respond to Magrathea’s mass entreaty.

A gem or a dual? Tony Abbott's Lying-ingate, by Ross Jones. http://t.co/wbqg4FwJlB

She begins her reply:

Thanks for emailing me.

I understand the Prime Minister’s office has said that the Prime Minister has renounced his British citizenship. If so, he would have done so by paperwork filed with the British government, which may explain why there aren’t Australian government records amenable to FOI. Not having seen any proof that the claim is a lie, I am not in a position to make any statement as to its veracity. I’d say that the person best placed to know the Prime Minister’s citizenship status is the Prime Minister himself. For that reason I accept his statement at face value. Having said that, I intend to write to him, in the terms of the enclosed letter, encouraging him to provide his declaration of renunciation, to avoid the need to continue to discuss this matter.

She concludes her reply to Tony Magrathea:

If it turned out that the Prime Minister was eligible, you wouldn’t get relief from the court. If, on the other hand, the Prime Minister wasn’t eligible when elected in 2013, it would seem likely that the court would void the election for his division, and a by-election would occur (as it did in the Kelly case). I suspect if that was to occur the Prime Minister would win that by-election, but of course that would be a matter for the voters in his Division. (I would make the observation that if all that was achieved through court proceedings and an expensive by-election was to maintain the status quo, that would be a shame.)It appears to me that if a person believed that an MP, including the Prime Minister, was not eligible to hold his or her seat, the proper approach would be to seek a remedy from the High Court. As you will have seen from the Hill and Kelly cases, that is generally done as a petition to the Court sitting as the Court of Disputed Returns. You could also consider a claim under section 46 of the Constitution which allows a citizen to seek that the MP be financially penalised for sitting while ineligible.

If you believe that he has signed any false declarations, that is a matter that you might consider referring to the police. For my own part, not having seen any evidence that a false declaration has been made, I’m not going to make allegations to that effect.

Having made all of those observations, I’d say that I have many, many disagreements with the Prime Minister. I believe he’s wrong on just about every issue of public policy about which I’ve heard his views. I disagree with his government’s attacks on pensioners, students, families, working people, and households generally. I vehemently oppose his attacks on Medicare and on access to education, among many other things.

I hasten to add that nothing in this email is to be taken as legal advice. You should seek your own advice, especially if you’re considering commencing court proceedings. You may also be interested in this e-brief (which I suspect you’ve already seen) about section 44 from the parliamentary library: http://www.aph.gov.au/about_parliament/parliamentary_departments/parliamentary_library/publications_archive/archive/section44

A polite dead bat you might think. But you’d be wrong.

Because enclosed was also a letter that had been sent to the prime minister: 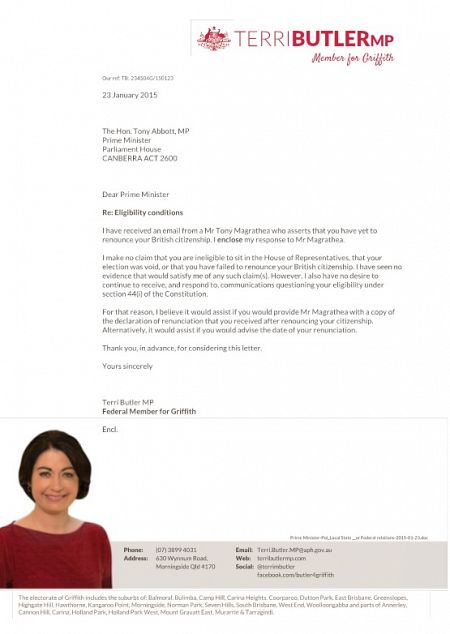 Like reporting a UFO, Labor risks widespread ridicule if it airs this thing in in Parliament. What happens if they beat it up, then Peta reaches into Tony’s satchel and flourishes the RN? Ignominy, that’s what. And no-one can prove he doesn’t have it. A hippy would refer to this situation as a mind-fuck.

But now the stakes have been ratcheted up a cog. The PM has received a written request from a sitting MP.

Will Tony fess up? Will half the front bench go to gaol for knowingly concealing a crime?

"MPs do not have the right to pick and choose which rules they decide to follow." - Cranky Noely is right. http://t.co/f53LC5qvv6