With Victoria going to the polls on Saturday, Jenny Warfe and Dr Matthew Mitchell present compelling evidence the real reason for the East West Link is not road congestion but a superfluous new port project.

Victorian Premier Denis Napthine’s figurehead multi-billion dollar road project, Melbourne’s East West Link, does not make financial sense — at least, not in the way it is being presented to the public.

Even the Victorian Government’s top planners believe a rail tunnel would be a better investment. So why is Napthine pushing it so hard?  It seems the East West Link is part of a much larger plan — a plan based on unsustainable growth and dubious business models.

The East West Link is part of the Napthine government’s 2013 Victorian Freight and Logistics Plan. This plan also includes the Port of Hastings development.

The plan proposes (page 17) to

‘… secure Victoria’s position as the leading State for freight and logistics.’

As part of this plan, it is expected (page 29) that the Port of Hastings

‘… once fully developed, will be the largest container port in Australia’.

The Hastings port and the East West Link projects are linked by Premier Napthine in relation to port services in his video update on the Freight Plan launch, when he says:

“The plan encompasses two of the largest investments undertaken in the state's history: the expansion of the Port of Hastings and the development of East West Link. And these are vital for the future of our state.”

The relationship of the Port and the East West road network are shown in the Freight Plan as follows: 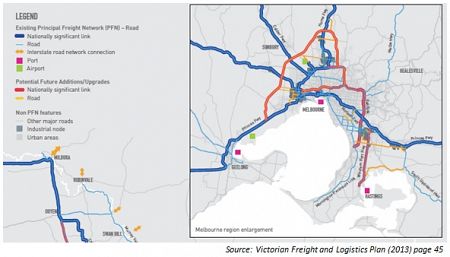 The Plan argues that the proposal to develop both the Port and the East West Link is sustainable. However, strong evidence suggests the modelling the Plan is based on is not accurate.

For example, The Age on November 11 reported an independent study that suggested the East West Link will cost $17.8 billion:

‘A report by 10 leading transport planners and financial analysts from three Melbourne universities concludes the East West price tag will be "comparable" with the Wonthaggi desalination plant.’

But that is just cost for the road — added to that is the cost of the port development. A development that questioned by former Toll Holdings boss Paul Little (and still largest private shareholder) who was last year quoted as saying the Hastings Port option:

"… would not deliver the best outcome for Victoria, would be a financial disaster for the freight industry... the proposal is deeply flawed.

"The high cost of building a standard-gauge rail link to Hasting and the construction of suitable freeway access would be excessive and difficult, if not impossible, to justify."

A further concern in this regard is that it appears that ports in general are based on a somewhat vulnerable business model. Two of the companies involved in operating Australia’s ports ‒ Patrick - Asciano and DP World Australia ‒ almost went broke after the Global Financial Crisis, with headlines such as:

And they seem to have struggled to recover since, with reports that Asciano suffered a bottom-line loss of $244 million in 2008-09, quadrupling in 2009-10 to $976 million. This ‘successful’ growth business also received $18 million from taxpayers in 2014, yet still laid off 30% of its workforce.

And these losses are on top of the fact that the most expensive port expansion projects are paid for by Victorian taxpayers — such as Channel Deepening, $1 billion; Webb Dock expansion, $1.5 billion and so on. Of course, if there is a major oil spill or contamination by exotic organisms ‒ something that, according to Dr Tim Lowe, costs the planet over $10 billion annually ‒ then costs may escalate substantially. Not to mention the pollution from both trucks and ships, which burn a particularly dirty form of fuel in our bays of coasts, producing pollution equivalent to 350,000 cars.

Finally in regard to sustainability, the Government’s proposal seems to take no account of the greenhouse gas emissions associated with shipping. Only the U.S., China, Russia, India and Japan emit more carbon dioxide than the world’s shipping fleet.

Taking into account that the Port of Hastings model depends on a massive growth projection of imports, the “sustainability” claim looks dodgier and dodgier.

This projection by the Government’s plan is also not consistent with expected population growth. The plan anticipates a 360% increase in container traffic, yet Victoria’s population growth over the same period (to 2060) is only projected to be a 62% increase.

A strange irony is that the East West Link may yet be funded by the sale of the Port of Melbourne.

So what should happen?

Well, without the Port of Hastings proposal, the case for the East West Link road seems much weaker than it already is. It is really doubtful that such a port is necessary, or that it will reach the expected freight targets.

Every state in Australia has similar plans for ports; there is no shortage of ports and port growth plans. 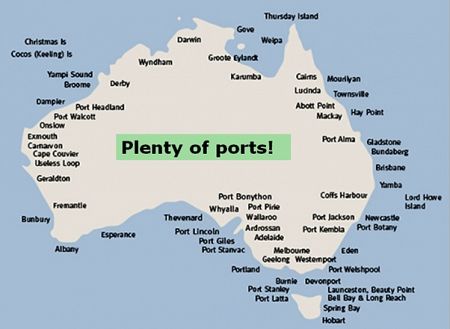 The problem seems to arise from the lack of a national port strategy. It may make far more sense to develop ports in the north of Australia and then rail freight containers down from there.

This is the proposal put forward by the Port Philip Conservation Council in which they suggest (PPCC Policy Statement 17):

But will any of our politicians, state or federal, explore these options?

Will they even consider the issues above? Or will they instead take the advice of the IPA on how to deal with people who raise environmental concerns? 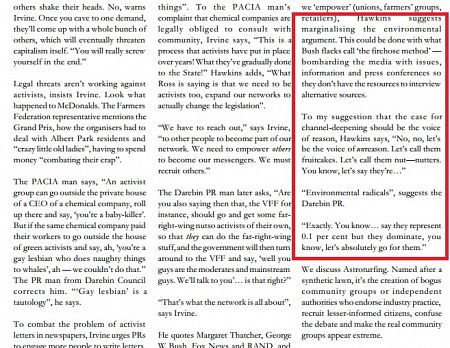 Let us assume that with goodwill something can, and will, be done. Then if as a nation we are going to pursue never-ending growth ‒ what George Monbiot calls ‘the insatiable god’ ‒ we need to consider the role of state government competition.

Note, such competition is not unique to ports. Water is another area where states compete with each other. In both cases state competition complicates already difficult issues.

In the case of ports, however, this has led to our overabundance of ports, all seeking to expand their traffic. Indeed, this is discussed specifically in relation to Queensland in a Centre of Policy Development 2013 report called Too Many Ports in a Storm.

So, progress on our problem with ports may require similar thinking to that applied to our river systems. And perhaps the only way to eliminate state competition is through major Constitutional reform.

Such reform has been argued for by Professor George Williams in regard to river systems.

Until we overcome the self-centred ambitions of our state governments, the negative effects can be expected to continue. These are increasingly impacting us in a variety of ways ranging from global climate change to our local roads and, finally, to our individual health.