A disability support pensioner says DSP changes foreshadowed by Kevin Andrews and the Abbott Government border on evil and may kill Australians.

AS SOMEONE who as depended on a meagre Disability Support Pension of $300 per week (partnered rate) for survival for years, Kevin Andrews’ announcement on the weekend that this benefit was going to be the subject of a major review, literally made my blood run cold.

According to reports, the only people who will be able to keep their DSP are people whose disability is 'permanent'.

I have reason to be concerned. My disability is possibly one day curable and it is episodic. It is also invisible: It is a mental illness — specifically post-traumatic stress disorder (PTSD) with the odd bout of major depression every so often.

While my disability has seen me scheduled to four different public psychiatric hospitals and two private ones, nine times over a period of 18 years, I don't believe that will be enough to placate Mr Andrews.

You see, I am what they call a high functioning person with a mental illness. That is in normal day to day life, I cope quite well and I can certainly work at a high level too. I look and act completely “normal”.

It is just when I am put under stress – like in a high powered journalism job for example – then I run the risk of becoming ill and having my symptoms rear their ugly head.

I was a journalist for 17 years before my experiences in life and journalism created such a severe case of PTSD that I could no longer work. I couldn't even go out my front door at various stages, such were the severity of the symptoms of this serious mental illness.

Psychological trauma is a terrible thing, my psychiatrist says, and it actually damages the brain. However, in Kevin Andrews eyes I would look healthy; I act normal, apart from a bit of nervousness in public, and my PTSD is quite possibly not permanent — with the right therapy and medication, one day I might be cured.

Don’t get me wrong, I want to work just like he wants me to, which is why I am studying for a law degree. I actually want to work for a political Party as a policy adviser when I graduate. I know it is a job I would be passionate about and I would adore so the chances of getting ill are slim. I thrive on certain sorts of stress, for example.

But it would have to be the right job. If you stuck me in a job waiting on tables or being a check out chick, for example, the stress would trigger an episode of illness and I would be in trouble.

But this would be just what Kevin Andrews would want me doing.

He is also unlikely to let me get my law degree while being supported by the DSP: I am sure the review will find anyone studying at university can be considered to be working full time and, because it is a law degree, I can almost guarantee I will lose my measly $300 — money which enables me to get the distinctions and high distinctions I achieved this semester, because I didn’t have to try to earn money to support myself.

Andrews has it wrong — people on the DSP want to work, it is work that doesn’t want us. Were I to have a PTSD episode at work, I would lose my job — as I have twice in the past.

If Andrews was serious about getting people off the DSP and into work, he would be doing things like introducing quotas to the public service, introducing draconian legislation to ensure that employers who discriminated against people on the grounds of disability were dealt with severely by the law and introducing financial incentives for private enterprise to support disabled employees.

Instead – presumably as a pre-emptive strike to ensure people thrown off the DSP have no-one to turn to – the Abbott Government has abolished the role of Graeme Innes, the Disability Discrimination Commissioner. (They retained their handpicked IPA 'Freedom Commissioner', however.)

If I wasn’t so anti Godwin’s law I would suggest some sort of fascist eugenicist policies at work.

It sounds dramatic, but I am starting to think it is quite possible they want to cull the disabled. According to The Guardian, when similar measures were introduced in Britain, people committed suicide and some even starved to death.

One way of getting rid of the burden of disabled people on society, eh?

Even if you try to hide your disability, when you sign on in paid employment, the tax office informs the employer you are a DSP recipient, which can often mean you get through your three month trial period. This nearly happened to me with a part time job.

People on the DSP are, literally, the most vulnerable people in the Australian society.

The Abbott Government, with its overhaul to the DSP, it is not only likely to harm and hurt them, it is abusing them and may quite possibly kill them.

And Kevin Andrews? Just another Abbott Government example of a good Catholic man — like Tony, like Pyne, Joe Hockey and God knows who else. Eight out of 19 cabinet ministers are Catholic, double the proportion in mainstream population. Four others belong to other Christian denominations.

Where has the Catholic Church gone so horribly wrong in producing these men without a modicum of compassion who want to harm the vulnerable. Where is their Christianity?

The changes to the DSP are bordering on evil and I am glad Labor will probably try to block them, given how supportive of disability issues Opposition Leader Bill Shorten is.

But until then, people like me will be living in fear of the phone call or letter from Centrelink telling us our DSP is being reviewed. 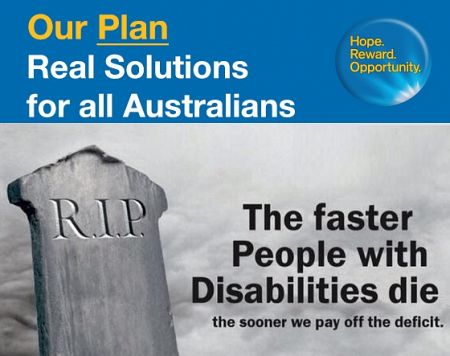 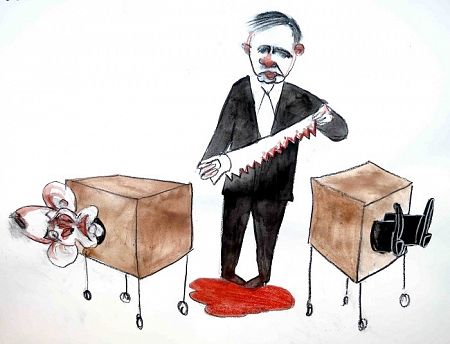