Last week, the Union Royal Commission went fishing for links tying the ALP with Big Tobacco, however all they brought up was the Liberals deep and longstanding ties with Kathy Jackson. Peter Wicks from Wixxyleaks reports.

IN THE WEEK following Kathy Jackson’s testimony at the Union Royal Commission (TURC) there has been a lot said about her sickening spending of the member’s money on seemingly almost everything imaginable, however some details appear to have escaped the mainstream media.

Earlier this week, I wrote about one rather glaring problem with her testimony, however on reflection there is another part of her testimony that also strikes me as odd, remarkable and significant.

It is also a subject other witnesses at the Royal Commission have testified about as well.

The testimony to which I refer involves the campaign donations from big tobacco, in particular Philip Morris who have denied funding any of the union campaigns.

Testimony given on the witness stand by Marco Bolano and Kathy Jackson was that they did not understand what possible interest a tobacco company or its lobbyist could have for funding a union election, unless it served some sort of political agenda.

The Royal Commission seemed, of course, to be desperately seeking to put a link between the Labor Party and the interests of Big Tobacco, since this would be in breach of the ALP’s own rules. Donations from Big Tobacco is, of course, a domain that has long been associated with the Liberal Party and the Coalition and the National Party still accept donations from tobacco firms.

Stephen Donnelly, the current Assistant State Secretary of the Victorian Labor Party who appeared as a witness on Thursday, was given a grilling in relation to this alleged link. He did not appear to be overly impressed with being dragged up for what was, in truth, a waste of time that served only to make the Commission appear like it was on a fishing expedition — which, of course, it is.

Through the questioning of Jeremy Stoljar SC, the Commission seemed eager to put Mr Donnelly at a lunch, or a dinner, or any event at all where there may have been a lobbyist for Phillip Morris present.

Mr Stoljar also questioned Donnelly about the the funding of election campaigns where we were give the astounding revelation that elections are, indeed, funded from raising campaign funds.

However, it would appear that the attempts to link the Labor Party to tobacco donations by both Kathy Jackson and the Royal Commission were clumsy at best.

If we take a look at Kathy Jackson’s testimony at TURC on the matter she is kind enough to mention the name of this representative from Philip Morris and go into great detail of why she remembered his name.

Counsel: You attended a lunch with some representatives of Philip Morris — that was in 2009. You deal with that in 47 and following.

Counsel: Is the short point that there was discussion about donation, but you reach a conclusion in 480?

Then, later in the testimony:

Jackson: I'm not certain how much money was contributed to Mr Bolano's campaign, or any other campaign for that matter. What I do know is that I have a recollection of this meeting only because the gentleman that was there from Philip Morris, his name was Bede Fennelly and I  just thought it was a very unusual name, only because I'd been reading that week a book about Bede Griffith, a Benedictine monk who went on to live in an ashram, I think, and made a comment to him about, you know, his unusual name and, you know, was he named after Bede Griffith [Ed: she probably means Bede Griffiths], and that's why I remember his name.

At that meeting I thought it was quite strange that here they were a tobacco company, and I think Mad Men had just started on the TV and I said, "My God, you people should watch this", you know, "It's all about you people", and I did ask at the time, you know, "What are you doing contributing money to Health Services Union elections?", and basically the response was, you know, "We can't give it away. It's very hard to give our money away to political parties these days", and that's how it was left.

So just who is the mysterious Bede Fennelly?

Well suffice to say he was no Benedictine Monk, however nor was he an employee or representative of Philip Morris.

Bede Fennell ‒ not Fennelly ‒ was, in fact, an employee of British American Tobacco — he had never worked for Philip Morris.

Despite the Commissions attempts to link the tobacco donations to the Labor Party Bede Fennell is also a former director of the NSW Branch of the Liberal Party and a former Liberal Party staffer.

Many may remember Mr Fennell as being part of the infamous “Wentworth Seven”, that involved Malcolm Turnbull back in 2003-2004.

In 2007, details emerged of a secret slush fund called ‘Friends of Indi’, that included donations from British American Tobacco and was discovered after former Liberal Member Sophie Mirabella neglected to declare it, in direct breach of Australian Electoral Commission regulations..

At the time, Bede Fennell stated that he thought the money was being donated to the Liberal Party. However he went even further, stating:

“For us that’s the main thing. That’s why we disclose it. We wouldn’t be giving money to bodies that aren’t connected to the Liberal Party.”

To me, that is a very telling statement indeed.

If British American Tobacco will only donate to bodies connected to the Liberal Party, why then did they decide to fund HSU election campaigns for Kathy Jackson’s faction of the HSU?

We all know that Jackson’s partner Michael Lawler was appointed to forerunner to the Fair Work Commission by Prime Minister Tony Abbott. We also know that Jackson was special guest and spoke at a dinner put on by anti-union Liberal Party think tank the HR Nicholls Society, where she dined alongside former Liberal Party Industrial Relations Minister Peter Reith. We also know from phone records that she was in regular contact with the offices of current Industrial Relations Minister Eric Abetz and disgraced former NSW Finance Minister Greg Pearce.

Add to that, we have seen both Abbott and Education Minister Christopher Pyne praise her in parliament, with Pyne even organising a ludicrously premature parliamentary apology for Craig Thomson’s parliamentary address that blew the whistle on both Jackson and Bolano’s alleged behaviour — something now becoming widely accepted as factual.

We have also seen and heard the cheerleading from the fact-blind Liberal Party cheer-squad, carping on the sidelines. People like Piers Ackerman, Ray Hadley, Chris Smith, Andrew Bolt and, of course, the man who now appears to be acting as Jackson’s PR manager, Michael Smith.

Could this possibly be yet another Liberal Party connection?

Or is Jackson perhaps just making it all up as she goes along?

Either way, I'm sure the fishing expedition for Labor links will continue.

However, one thing is quite apparent when questions are raised over Jackson’s questionable conduct and possible criminal behaviour, most in the Labor Party couldn't distance themselves further from her, while those associated with Liberal Party flew to her like flies to a steaming pile of ….

At what stage do the Liberal Party stop the ludicrous charade and simply accept Jackson is one of theirs? 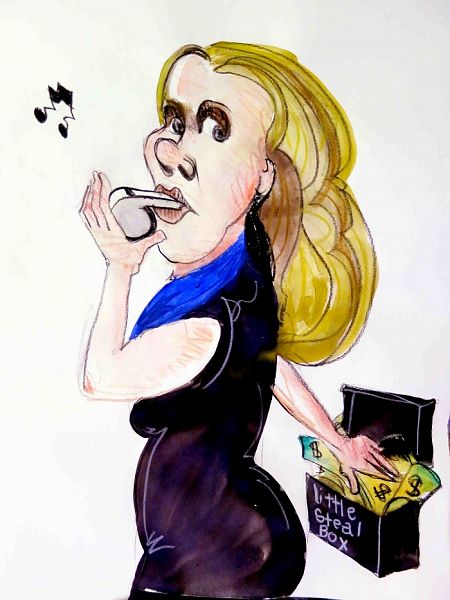