After Fiona Barnett was bullied out of her Bond University psychology course, health regulator AHPRA treated her case with a curious mixture of incredible incompetence and callous contempt.

IN THEORY, the role of the Australian Health Practitioner Regulation Agency (AHPRA) is to oversee the administration of our medical, psychology and other health profession boards. They are supposed to protect the public from malpractice, while simultaneously offering a level of protection for innocent health professionals against vexatious and unsubstantiated complaints.

In 2011, a Senate Committee Inquiry was conducted into AHPRA. The Inquiry’s findings were damning.

6.19 In relation to complaints about health practitioners, the committee identified a number of areas where improvements are required including inconsistencies in application of complaint processes … and the way in which vexatious complaints are handled.

6.32 … the mistakes, omissions and poor processes that were clearly evident from the evidence received during the inquiry calls into question the ability of AHPRA to carry out its primary purpose. For AHPRA itself to be responsible for a breakdown of the entire system of registration of health practitioners in Australia is a dismal example of policy implementation and public administration.

You might expect, following such a finding, that the Queensland AHPRA office may have addressed the Inquiry’s criticisms and implemented some changes. Unfortunately, if you did, you would be wrong.

My personal child abuse experiences formed the basis for Bond University’s notification against me.

My abuse constituted grounds for Bond’s allegation that I was ‘impaired’ and posed a risk to the public. This was despite no explained link between my having experienced child abuse 30+ years ago and my alleged impairment.

AHPRA cited my personal child abuse history as evidence that I was psychotic and a criminal.

The obvious anomaly in their argument was that they used my personal testimony as being a symptom of psychosis, then they simultaneously employed my testimony as a basis for contacting the police and accusing me of criminal activity.

It is difficult to understand how my testimony could simultaneously be both a product of my imagination and a physical reality.

After making a FOI (Freedom of Information) application, I obtained the following emails showing that AHPRA communicated with police in both NSW and Queensland.

Two email exchanges identified a senior detective who worked for the Gold Coast CIB and who also lectured at Bond University.

The first email (dated 11/11/2010) from AHPRA to the Queensland police officer was addressed to his Bond University email:

‘It has come to my attention that Ms Barnett is under investigation by police following serious allegations of a criminal nature …  if you have any information which may be imperative to the assessment of Ms Barnett’s health, please do not hesitate to contact me.’ 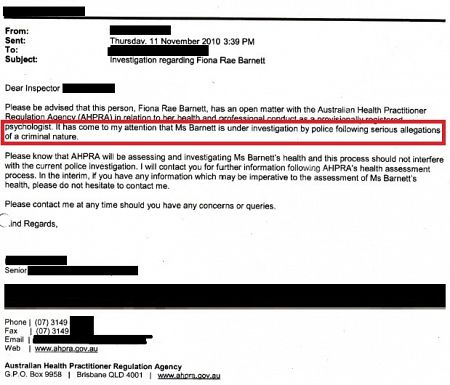 The second email (dated 26/11/10) from the Bond University lecturer to AHPRA stated:

The last briefing I had was that contact had been made with NSWPOL and they could not identify any outstanding jobs that would match the claims made.

They also informed us that the suspect had previously made outlandish claims of a similar nature. The investigation is ongoing but given the above I would suspect it will not be a police matter. 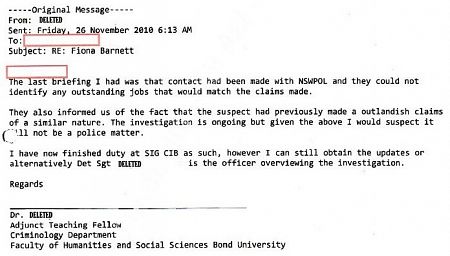 This letter documents that police dismissed my testimony as ‘outlandish’, despite: 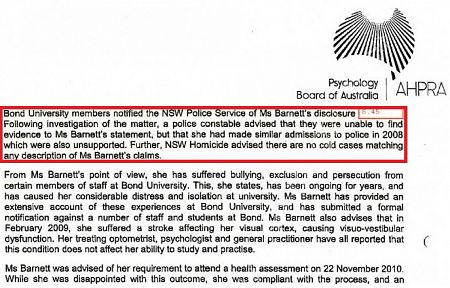 I was never interviewed with regard to the allegations I made to police.

AHPRA used the above correspondence as evidence I was a criminal, as recorded in their letter (dated 29/3/11) and addressed to me, which said:

‘…confirmation of similar reported events by the NSW Police Service regarding past criminal activities of a serious nature is a matter that the Board will need to address.’ 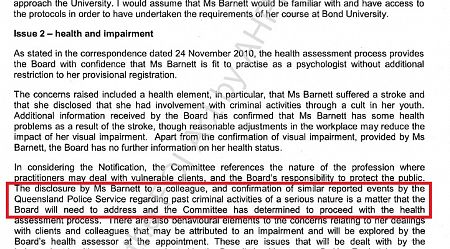 I sent written complaints about these emails to the NSW and Queensland police commissioners.

Both police commissioners denied that NSW police provided any information to AHPRA in support of Bond University’s accusation that I was a perpetrator of crimes.

So, either police lied to their ministers about providing emails to AHPRA or AHPRA fabricated evidence against me.

I submitted the two police ministers’ response letters, plus comprehensive evidence which clearly disproved Bond University’s allegations against me. I submitted these to Queensland AHPRA’s state manager. 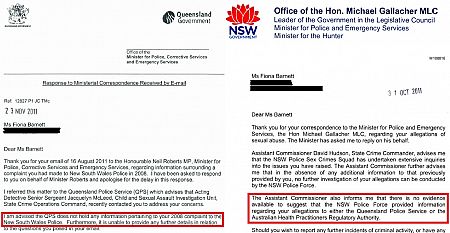 AHPRA use health assessment to “stitch up” student

On the basis of Bond University’s vexatious and unsubstantiated notification, AHPRA ordered me to attend a health assessment.

Several professional sources warned me not to attend this assessment.

These sources included a high profile psychiatrist who warned me that AHPRA had employed a notorious “creep” psychiatrist to “stitch [me] up.” Patient feedback on a social media site described the ‘hired gun’ as “likes to humiliate patients.” My own GP also warned me not to attend AHPRA’s health assessment.

One close personal contact, who drafts legislation for the Queensland Government, warned me that archaic Queensland legislation permitted AHPRA’s ‘hired gun’ health assessor to decide I was psychotic even if I was not, call police without my family’s knowledge, drug me and admit me to a psychiatric hospital. She said AHPRA had far reaching powers, including the authority to enter my home and remove my personal belongings.

She studied the new Health Practitioner Regulation National Law (Qld) 2009 (referred to hereafter as the Health Act) and concluded that it had been poorly written, failing to include penalties for my refusing to attend an AHPRA health assessment.

She then advised me not to attend the assessment.

AHPRA breached the Health Act by, for example, demanding I pay the costs associated with their health assessment.

They sent me multiple ‘Authority’ forms to sign, which said:

‘I, Fiona Barnett hereby authorise the following practitioner to provide information as requested by the Psychology Board regarding my current and past medical condition. I agree to accept responsibility for any costs associated with the production of this information.’ 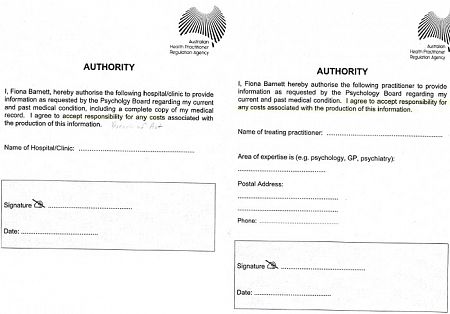 This direction from AHPRA overrode a general provision made in Section 171(4) of the Health Act which states:

‘The assessor’s fee for carrying out the assessment is to be paid out of the National Board’s budget.’ 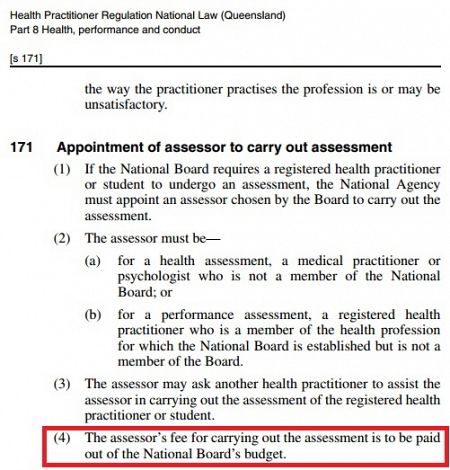 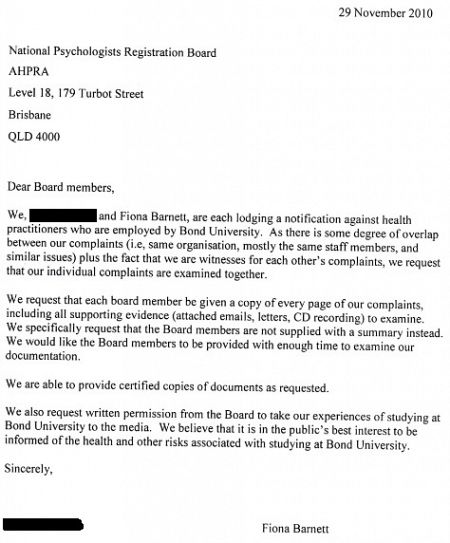 The other student had an unblemished ten year career as a psychologist and a supervisor.

The health regulator stated its reasons for refusing to act were: 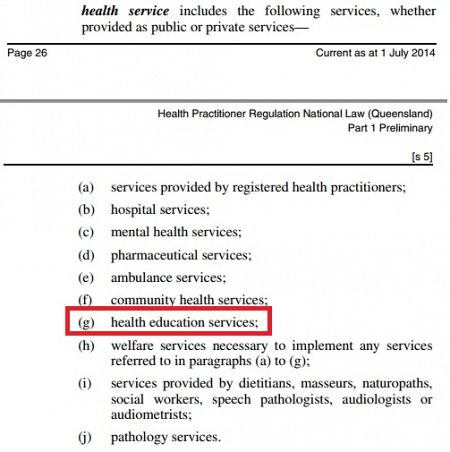 Back in 2009, the Psychologists Board of Queensland had already sent me a letter saying:

‘…the Board endorses the Australian Psychological Society’s APS Code of Ethics and the APS Ethical Guidelines. The Board is guided by, though not limited to, these documents when assessing the professional conduct of registrants.’

The letter shows that the definition of students as clients preceded AHPRA. This definition should have been implemented regardless of whether the administration of the Psychology Board had problems transitioning from a state to a national scheme.

Meanwhile, AHPRA stated they had employed the very same APS Ethical Code and Guidelines in their administration of Bond’s vexatious and unsubstantiated notification against me.

‘The Board has adopted the Australian Psychological Society’s Code of Ethics for the profession and should an investigation be commenced into the conduct and professional standards of Ms Barnett, the Code will be the standard against which the concerns will be assessed.’ 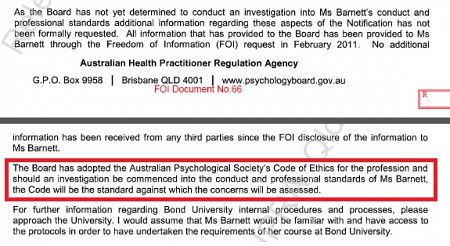 Bond University psychology lecturers should be held accountable according to the APS Code of Ethics and Guidelines regardless of whether psychology students are labelled ‘clients’ or ‘colleagues’.

AHPRA’s lack of action against Bond University psychology lecturers would appear to be inconsistent with the Health Act’s definition of ‘unprofessional conduct’, which is stated to mean:

It is difficult to imagine that the public would approve of psychologists and lecturers having parties with students, supplying students with alcohol, and then sexually assaulting students while they are under its influence of alcohol and asleep. It is also difficult to imagine that professional peers would condone Bond University’s lack of adherence to mandatory reporting requirements.

In a letter (dated 4/1/11) AHPRA admitted that it operates in accordance with principles of natural justice.

However, AHPRA failed to tell me the basis for the allegations of unsatisfactory conduct and professional standards, criminal behaviour, being impaired and of posing a risk to the public. Consequently, AHPRA failed to act in accordance with the principles of natural justice.

AHPRA deprived me of my right to due process and my right to be heard. I was denied correct information and legal consultation. AHPRA denied me the opportunity to respond to Bond University’s allegation I was ‘psychotic’ and a ‘criminal.’ They consistently denied me the chance to submit an initial right of reply to Bond’s notification. Despite multiple requests, AHPRA failed to provide me with sufficient information concerning the content of Bond’s notification against me so that I could actually compose a right of reply. To access any information, I had to struggle to obtain my AHPRA file under FOI provisions.

AHPRA tried to bully, threaten and railroad me into quickly complying with their unlawful and unfair administration of a vexatious notification. AHPRA demonstrated bias, provided me with confusing and contradictory instructions, withheld crucial information and misrepresented me to the Queensland Psychology Board. AHPRA set me impossible deadlines, carrying negative consequences and threatened me with action that could result in financial loss, loss of professional registration, loss of reputation and deprivation of liberty.

AHPRA eventually said that I could substitute their psychiatric assessment with a private medical report. 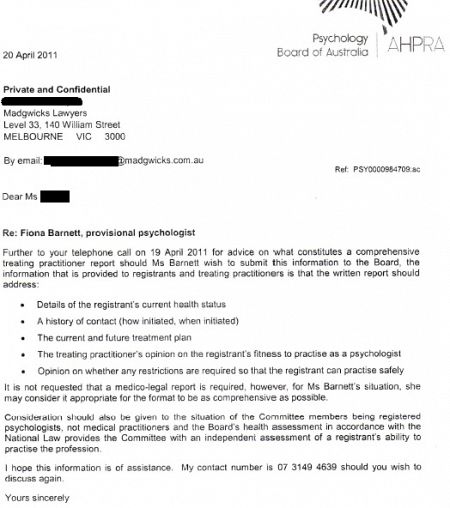 My GP referred me to a high profile psychiatrist for a specialist report.

I paid thousands of dollars for a comprehensive medical report, in which the psychiatrist concluded that I had no mental health disorder. He reported that the only thing I needed counselling for was the mistreatment and subsequent stress to which Bond University had subjected me.

AHPRA then mysteriously gave me back my registration. Then they took it away again. This yo-yo approach was typical of Queensland AHPRA. 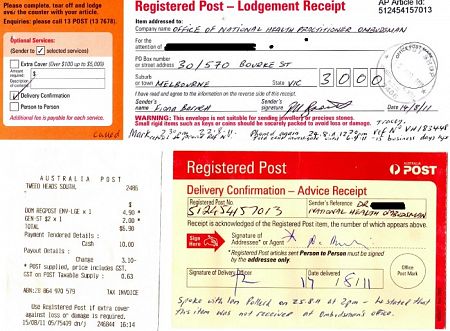 Despite my receiving a signed delivery confirmation slip, the ombudsman’s administrator told me that their office never received my complaint. The office ignored my follow-up emails, emailed complaint submission, phone calls and recorded messages.

I then formally complained about my missing parcel to Australia Post, who concluded that it “must have been lost”.

Queensland AHPRA’s actions against me ‒ an innocent student and victim of crime ‒ indicate that nothing has changed to improve their professional operation since the damning findings of the 2011 Senate Committee Inquiry.

As other Independent Australia contributors have long campaigned for, a Royal Commission is required to get to the bottom of the shonky – perhaps criminal – administration of health in Australia.

Editor's note: Fiona Barnett has submitted a properly signed and witnessed statutory declaration to IA to support all the statements and allegation she has made in this piece. Most names have been redacted for legal and privacy reasons. Anyone wishing to come forward with any further information is strongly encouraged to contact managing editor David Donovan via email at editor@independentaustralia.net.

Dr Patel and the need for a Royal Commission into medical administration http://t.co/wMRTd9o9Ts via @IndependentAus