A huge boost in Tony Abbott’s standing as preferred prime minister is expected following his latest stroke of genius.

Announcing his “temporary debt levy” the PM, whose opinion poll rating has been disastrous since Christmas, said:

“This is the breakthrough we have been looking for.

“We thought about reprising John Howard’s core and non-core promises, but the mugs won’t buy that again.

"We pondered activating Tony’s trick of ‘if it’s not written down I didn’t mean it’, but the stupid bugger did write down all those promises.”

The office of communications minister Malcolm Turnbull was celebrating when Independent Australia called.

“We haven’t broken any promises on broadband at all now. We just temporarily haven’t delivered.”

The spokesperson confirmed that both the ABC and SBS will be closed down and contracts for overseas services, parliamentary broadcasts and other essential programs will be given to Rupert Murdoch.

“But these are only temporary closures. So it’s in no way a broken promise.

"In ten or twenty years’ time another government is quite free to start them again.”

The office of the Treasurer announced proudly that there would be no increase in the goods and services tax, either this year or at any time in the future.

As an advisor explained:

“What we have done instead is abolish the 10% GST altogether. We will now have a GSL at 15%. We can whack this on food, education, wages and real estate. On everything!

“And there’s no way it’s a broken promise because it’s not a tax — it’s a levy!”

A special crack team of promise fulfillers from the Institute of Public Affairs and Menzies House is currently applying the strategy to all Abbott’s promises.

One IPA researcher explained just how innovative this initiative can be:

“We have just gazetted Peta Credlin’s swimming pool as an Aboriginal reserve. So next time Tony spends a week there, he will have fulfilled his commitment to the Yolngu. It wasn’t easy, but we did it!”

In a major breakthrough in foreign affairs, Cambodia has now agreed to accept Australia’s naval personnel as temporary Cambodian citizens on an ‘as required’ basis.

A senior Coalition backbencher elaborated, saying the days of broken promises are over:

“This means when naval vessels invade the borders of Indonesia or any other godforsaken heathen country while towing back ragheads, it’s not us — it’s the Cambodians! Broken promises? Not any more!”

The elite promise-keepers unit has been working overtime in education, where several redefinitions have been authorised.

An aide explained the new methodology:

“The term ‘education’ now applies only to those activities which generate tax deductions for citizens on incomes over $750,000. All other activities related to the imparting of knowledge or gaining of qualifications will hereafter be known as ‘schooling’.

“So Tony can now keep all his promises on education.”

On pensions, Abbott said just before the election:

“I can assure your listeners that there will be no cuts to pensions.”

Then in December, finance minister Mathias Cormann confirmed cuts to the disability pension.

A ministerial adviser explained that under the new Abbott scheme, this commitment can now be met:

“Now, however, we can totally fulfil the original commitment.”

“No way are those pension cuts a broken promise. Because obviously, pensioners won’t live forever, will they? So it’s temporary!”

Employment minister Eric Abetz was unavailable due to celebrating fulfilment – well ahead of schedule – of Abbott’s promise to create a million jobs.

A minder explained how this would happen:

“We have just expanded slightly the definition of the region wherein we are creating jobs,” “Now, we count canned fruit processors in New Zealand and Chile and car workers in Korea and Japan.”

Asked if the million jobs Abbott has now created include Queensland sheep saved by the drought package, the minder said: “Er, I’ll get back to you on that.”

In a major reversal, the government has now taken decisive action to fulfill its pre-election promise to provide a customs ship to monitor Japanese whaling in Australia’s region.

A senior frontbencher said the Government takes its monitoring responsibilities in this area very seriously:

“This is a vital international responsibility. So although we can’t send a ship we are increasing travel allowances for government MPs to fly to Japan for the weekend to assess first hand whether sushi restaurants still serve whale meat.

“This decision was taken at a journalist’s wedding recently by Liberal MPs Bronwyn Bishop, Tony Abbott and Don Randall.” 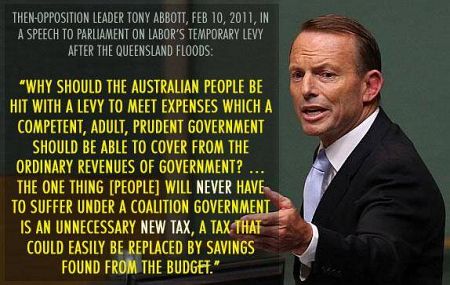 A further major embarrassment for the government has been solved regarding Australia’s non-government aid organisations.

Before the September election Julie Bishop, now foreign minister, assured NGOs that they would receive increased funding. After the election, allocations were cut.

Yesterday, however, the definition of NGO was expanded to include lawyers, barristers and judges employed in Australia’s burgeoning royal commission industry.

“After all, they are non-government agents,” the minister’s assistant explained. “Well, sort of.”

The only remaining problem area for the government is health.

“We just need to find someone capable of twisting the meanings of ‘no’ and ‘cuts’ and ‘to’ and ‘health’,” a colleague of the PM said.

“Unfortunately, they are all working for News Corp.”

So, the (Business Council) Commission of Audit recommends closing down departments and selling everything (to big business). What a shock. 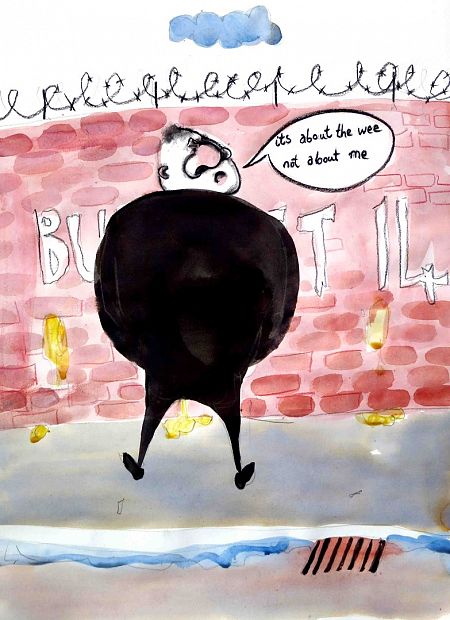