On 24 April 1915, Turkey arrested and murdered hundreds of Armenians as part of a genocide. President Hollande will lead a French delegation to Armenia for the Genocide Centenary but the Abbott Government refuses to acknowledge the genocide, writes David Boyajian.

APRIL 25 this year will mark 100 years since the Allies – the UK, Australia, New Zealand, and France – made their ill-fated landing on Turkey’s Gallipoli peninsula during WW1. Having barely gotten off the beaches after months of fighting, the Allies withdrew in defeat leaving over 44,000 dead and 97,000 wounded.

As in recent years, thousands will flock from the Allied countries and elsewhere to Gallipoli for the Turkish-led April 24-25 commemorations. Numerous world dignitaries, including Australia’s and New Zealand’s prime ministers and Prince Charles, will also attend.

In April, the UK, Australia, and NZ hold Gallipoli remembrances on their own soil and elsewhere. And throughout the year, their citizens visit Gallipoli to pay tribute to the UK’s 21 thousand, Australia and NZ’s 11 thousand, and France’s 10 thousand dead. This is proper and honorable.

However, thronging to April’s sham commemoration staged in and by Turkey, a notorious human rights violator? Which had mistreated Allied POWs? Which today abuses its remaining Christians, as well as Alevis, Kurds, and Jews? Which also committed genocide and pillage against millions of indigenous Christian Armenian, Assyrian, and Greek civilians during the Gallipoli battle and for years afterward? And which arrogantly denies having done so?

The UK, Australia, and NZ themselves have made the Gallipoli ceremonies in Turkey something less than solemn. Smiling lottery winners receive tickets to the event. Youngsters vie to become Gallipoli “youth ambassadors” and win all-expense paid trips. Is Gallipoli the resting place of valorous Allied troops, or Disneyworld Turkey? 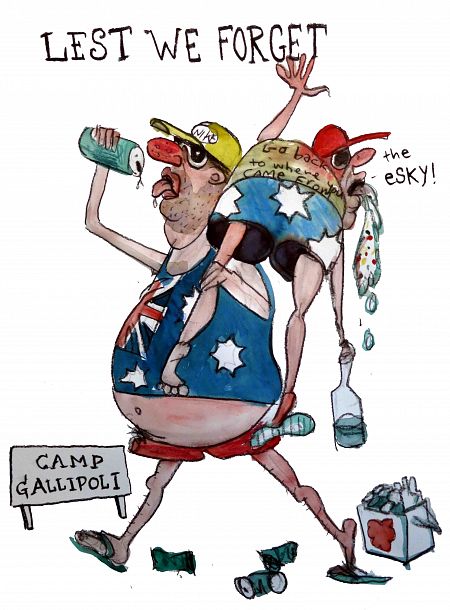 Westerners often do not understand Turkey. The Turkish government does not mourn the Allied dead any more than it cares about the victims of its genocides and the deliberately unmarked, mass graves in which they lie.

Turkey enjoys the spectacle of defeated foreigners trudging to Gallipoli. Indeed, Turkey holds a huge Gallipoli celebration the month before. This year, it displayed a victory banner 1915 meters long. Meanwhile, Turkey’s Defense Ministry has reportedly removed the names of non-Muslims from the list of its soldiers who died at Gallipoli.

2015’s Gallipoli attendees can anticipate a lecture by Turkey’s egomaniacal President Recep Tayyip Erdoğan. He just built himself a gaudy 1100-room palace for a reported $615 million. In 2013, Erdoğan killed demonstrators in Gezi Square who were protesting his authoritarian rule, and regularly sues and jails journalists.

The Armenian, Assyrian, and Greek genocides in Turkey were reported extensively at the time in Allied countries’ newspapers. France, Great Britain, and Russia issued Turkey this famous warning in May 1915:

“The Allied governments … will hold personally responsible … all members of the Ottoman [Turkish] government and those of their agents who are implicated in such massacres.'

Australian and New Zealand (ANZAC) POWs, such as Captain Thomas Walter White, witnessed and later wrote about the genocides.

Winston Churchill termed them a “holocaust.” “Race extermination,” declared U.S. Ambassador to Turkey Henry Morgenthau in 1915. It was that extermination which first motivated Raphael Lemkin, the Polish Jewish lawyer who later coined the word “genocide.”

The parliaments of the European Union, Canada, France, Lebanon, Russia, Sweden, Switzerland, Uruguay, and many others, as well as a U.N. sub-commission, the Vatican, and the International Association of Genocide Scholars (IAGS), have recognized the Armenian genocide. IAGS has also recognized the Assyrian and Greek genocides. In 1951, the U.S. referred to the Armenian “genocide” in a filing with the International Court of Justice (World Court).

But the governments of the UK (except for Scotland and Wales), Australia (except for New South Wales and South Australia), and NZ refuse to acknowledge these genocides. They fear Turkey’s reaction. Contrast their gutlessness with the courage of Allied soldiers at Gallipoli.

'Is [Turkey] the sort of government we as New Zealanders are proud to stand alongside on April 25, 2015?'

Officially, 2015 is “The Year of Turkey in Australia.”

A more apt name: “The Year of Turkish and Australian Genocide Denials.”

France, on the other hand, has acknowledged the Armenian genocide despite Turkish threats. A large French delegation headed by President Hollande will be in Armenia on April 24 for the Genocide Centenary. On that day in 1915, Turkey arrested and murdered hundreds of Armenian intellectuals, doctors, priests, writers, and other community leaders as part of the genocide. 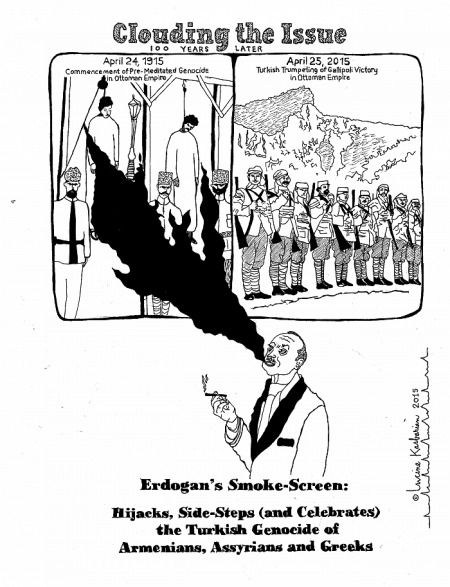 Turkey enjoys bullying others over Gallipoli. Five years ago, it initially refused to issue visas to Australian and New Zealand archeologists who were to map Gallipoli’s battlefields. Turkey was angry that Bonnyrigg, a Sydney suburb, had allowed construction of a monument commemorating the Christian Assyrian genocide.

Two years back, Turkey threatened to ban New South Wales MPs from Gallipoli because NSW had recognized the Armenian genocide.

Afraid of further incurring Turkey’s wrath, earlier this year NSW installed – surreptitiously – a plaque in Sydney’s Hyde Park honoring the Turkish hero of Gallipoli, and later president, Kemal Atatürk. The plaque’s fine words, allegedly penned by him, are undoubtedly insincere and perhaps inauthentic. Moreover, this “hero” continued the evil deeds of his predecessors.

Atatürk welcomed veteran genocidists, such as Abdülhalik Renda and Şükrü Kaya, into his new government. From 1919 to 1923, Atatürk’s forces murdered and expelled Christians who had survived the genocides.

In 1937, Atatürk directed the slaughter, sometimes using poison gas, of thousands of Alevi Kurdish civilians, including women and children, in the Dersim region. Among the victims were Armenians who had found shelter there.

Hitler admired Atatürk’s brutality. Atatürk was “the greatest man of the century,” the Führer told Turkey’s Milliyet newspaper in 1933, and “Turkey was our role model.” Indeed, in WW1, some German officers took part in the Armenian genocide.

Visitors to Gallipoli will bow before Atatürk’s statue unaware of his appalling record. 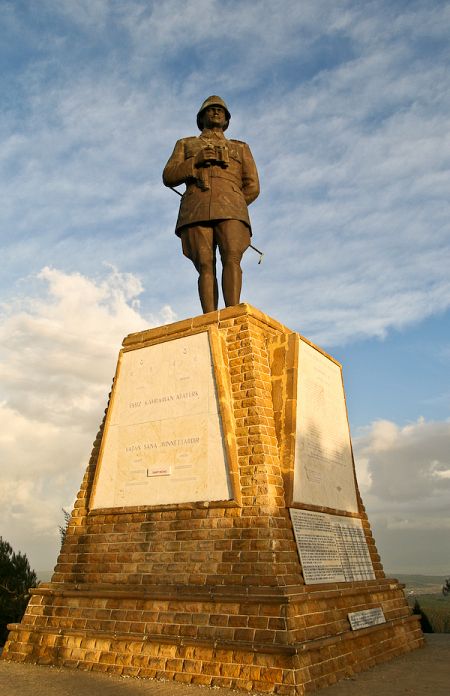 Statue of Mustafa Kemal, known as Atatürk, erected beside the Commonwealth memorial on the highest point at Gallipoli.

The Allies fought WW1 gallantly. Armenians from many countries were among them. Armenians even formed a special French Foreign Legion unit that fought with particular distinction. Hundreds of thousands of Armenians also served in Allied armies in WW2, while Turkey remained neutral and cozied up to Nazi Germany.

"Please, honor our memories by going elsewhere in April, and shun Turkey’s victory dance on our graves and those of millions of Christian innocents."

The author is a freelance Armenian American journalist. Many of his articles are archived at Armeniapedia.org.

You can order John Graham original cartoons from the IA store.. You can also follow John on Twitter@JohnGrahamArt and on Facebook here.

10 April 2015, 11:00am On 24 April 1915, Turkey arrested and murdered hundreds of Armenians as part of a ...
Join the conversation
comments powered by Disqus
News updates